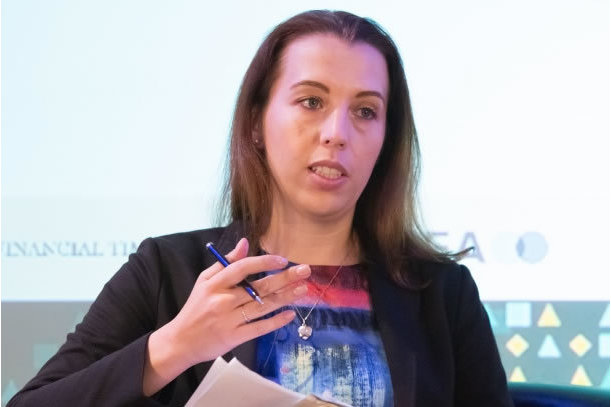 We must acknowledge that it will be a rough two years in Nigeria, but we can and should help create the policy response to these issues – Aubrey Hruby.

US investment specialists on Africa, Aubrey Hruby, has said that experts and investors should treat Nigeria’s ongoing economic challenges just like they would in other countries. She urged the investment community to judge Nigeria using the same metrics applied to other large emerging markets in Europe, Asia, and Latin America in efforts to help the country recover from its current economic slump.

“People need to talk about it clearly and honestly – in order to spark the necessary solutions,” Hruby said. “Nigeria isn’t a riskier investment than other large emerging markets right now, but firms and investors shouldn’t coddle the situation.”

Nigeria has been facing its worst economic crisis in recent times due mainly to the slump in the price of oil, the country’s main export, which also accounts for 70 percent of government revenue. In the first quarter of 2016, Nigeria’s GDP contracted by 0.36 percent and official data is expected to show that GDP also contracted in Q2 2016, confirming that the economy has slipped into a recession.

Inflation – which has been in single digits since January 2013 – crossed into double-digit territory in February this year, reaching 16.5 percent in June. Consequently, the International Monetary Fund revised Nigeria’s economic growth forecast to -1.8 percent this year, a sharp revision from an earlier forecast of 2.3 percent.

“The Nigerian reality remains: potential growth is there defined by the underlying demographics. We must acknowledge that it will be a rough two years in Nigeria, but we can and should help create the policy response to these issues,” Hruby said.

“With a good debt to GDP ratio and a free flotation of the currency already, some conditions for international air are in place, although it’s likely the IMF will have additional conditions.”

In June, the Central Bank of Nigeria abandoned its currency peg, allowing the naira to float freely on the interbank foreign exchange market. Although the decision has caused the naira to fall by over 40 percent, it has yet to ease the country’s lingering forex shortages. Some foreign investors had said flexibility in the forex market was a condition for them to return to the country.

“I've fought for the mainstreaming of African economies into global commerce for over a decade,” Hruby said. “This means they should be judged by the same metrics used for countries from France to Colombia. Honesty is the best policy and can help bring the change Nigeria needs.”

Hruby is the Managing Partner of Noveni Advisors and a co-founder of the Africa Expert Network (AXN). She was previously the Managing Director of the Whitaker Group, an Africa-focused strategy and investment advisory firm that has helped facilitate over $2 billion in investment and capital flows to Africa.