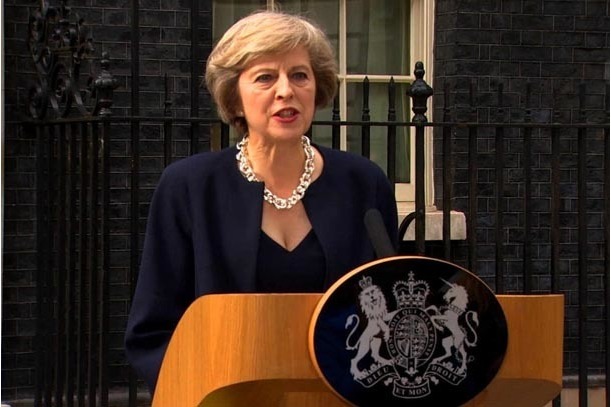 May said she will champion the cause of the poor, women, youths, the working-class residents of Britain as well as those with mental health issues.

Theresa May, who became the new Prime Minister of Britain on Wednesday following the resignation of David Cameron, has said she will reunite the nation as the United Kingdom prepares to leave the European Union.

May, 59, is the UK's second female Prime Minister after Margaret Thatcher, who was in office from 1979 to 1990. Theresa May is also Britain's 14th unelected Prime Minister since 1900. She assumed the leadership of the Conservative Party on Monday after her sole contender, Andrea Leadsom, dropped out of the race.

In a speech outside 10 Downing Street on Wednesday after she was appointed by Queen Elizabeth, May said she will champion the cause of the poor, women, youths, the working-class residents of Britain as well as those with mental health issues.

“My party is the Conservative and Unionist Party and that word unionist is very important to me. It means we believe in the Union, the precious, precious bond between England, Scotland, Wales and Northern Ireland - but it means something else that is just as important. It means we believe in a union not just between the nations of the United Kingdom but between all of our citizens - every one of us – whoever we are and wherever we're from.

In a historic referendum, the United Kingdom voted on June 23 to leave the European Union after 43 years in the union. This prompted Cameron to announce his resignation and allow for the next leader of the Conservative Party to be the next Prime Minister.

May, along with David Cameron, campaigned for the country to remain in the EU. However, she said the government she leads will carve out a bright new future for Britain after the referendum vote.

"We will rise to the challenge. As we leave the European Union we will forge a bold new positive role for ourselves in the world, and we will make Britain a country that works not for a privileged few, but for every one of us," the new British Prime Minister said.

A little over an hour after she assumed office, May started announcing members of her cabinet, making a total of six key cabinet appointments on Wednesday.

She appointed Philip Hammond as Chancellor of the Exchequer to replace George Osborne. Hammond was previously Britain's Foreign Secretary. As Chancellor, Hammond has the responsibility of steering the UK economy through the uncertainties surrounding Brexit. The country faces a looming economic downturn that could follow the EU referendum.

Spokesperson to Theresa May said the Prime Minister ended her day with phone calls to European leaders stressing the UK's commitment to Brexit, while explaining that her government would need some time to prepare for the negotiations.