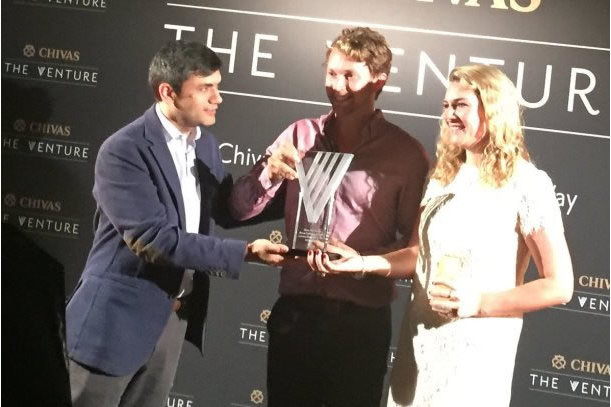 NOW Money was selected as the winner on account of its record of improving the lives of 26 million low-income migrant workers in the UAE and other Gulf Cooperation Council.

NOW Money, a mobile money and remittance platform for the unbanked population of the United Arab Emirates (UAE), has been declared winner at the Gulf regional final of Chivas The Venture, a global search to find and support the next generation of start-ups. The Venture is a flagship competition of Chivas Regal, the world's leading Scotch whisky.

NOW Money was selected as the winner on account of its record of improving the lives of 26 million low-income migrant workers in the UAE and other Gulf Cooperation Council (GCC) countries by providing them access to bank accounts, debit cards and remittance services.

The competition – which was designed to inspire social entrepreneurs and those seeking positive change from around the world – took place on Wednesday, January 18, at the Marina Social, Intercontinental Dubai Marina in Dubai. Four social start-up enterprises were invited to pitch their business and the positive social impact it will have on society. A panel of five judges selected NOW Money following the winning pitch of its co-founders, Ian Dillon and Katharine Budd.

"Our decision to choose NOW was unanimous," said Gaurav Sabharwal, Managing Director, Pernod Ricard Gulf, and head of the judging panel. "Their business can positively benefit the lives of literally millions of people and can be replicated geographically, quickly and cheaply. The potential social impact is astounding. We believe NOW is a worthy winner capable of representing the region on a global stage and competing strongly for its share of The Venture’s US$1m global social enterprise fund.”

NOW Money will represent the Gulf region in the upcoming Chivas The Venture global final in Los Angeles in July 2017. 30 finalists from across six continents will have a chance to pitch for a share of a $1 million fund before an expert panel of judges who are looking for businesses that can offer scalable and sustainable solutions to real world issues.

The mobile money company also won a place at Chivas The Venture’s Accelerator Week, in Oxford, UK, where they will receive world-class mentorship and support in preparation for the global final of the competition.

“We are so proud to have been part of this competition which recognises companies who strive to create social change, and to win the Gulf regional final is just fantastic,” said Dillon. “It’s been such a journey to get to this stage, and we’re looking forward to the next six months as part of The Venture programme with an enormous sense of anticipation, excitement and confidence. We are the only company whose sole purpose is to stamp out financial exclusion, and the funding that we could receive from this opportunity could be a real game changer.”

NOW Money was launched in 2015 by Ian Dillon and Katharine Budd. In October 2016, Katharine Budd, won the award for Best Entrepreneur in STEM – Start-Up at the global Women in STEM Awards 2016, an initiative of the Meera Kaul Foundation, established by entrepreneur and tech investor, Meera Kaul. The company secured seed funding in June 2016 and is expecting Series A funding. It is also touted as the GCC's first app-only bank. Other GCC countries are Bahrain, Kuwait, Oman, Qatar and Saudi Arabia.