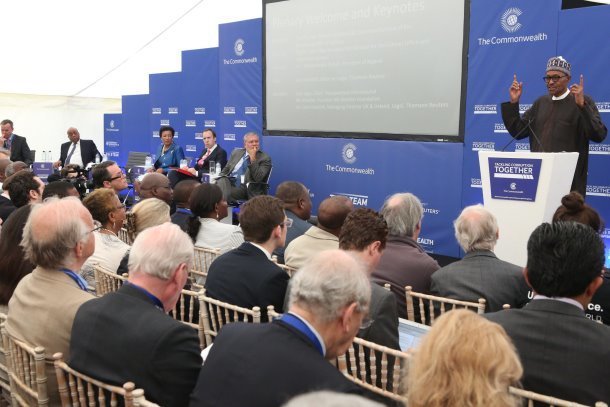 President Muhammadu Buhari has said Nigeria will soon begin the implementation of the principles of the Open Contracting Data Standard (OCDS) as part of his administration’s ongoing war against corruption.

Buhari stated this in a speech at the Anti-Corruption Summit 2016 which held in London on Thursday. The summit was hosted by the British Prime Minister, David Cameron, who said in his opening remarks that foreign companies that own about 100,000 properties in England and Wales will be required to disclose their ownership.

The OCDS enables the disclosure of data and documents at all stages of the public contracting process by defining a common data model. President Buhari said Nigeria will apply the OCDS to major projects in the oil, transportation, power, health, education and other sectors.

He said the publication of OCDS data will promote greater transparency in the award of contracts as well as support accessible and in-depth analysis of the efficiency and integrity of public contracting systems.

President Buhari said that his administration plans to establish a public register of owners of all companies involved in property purchase and public contracting.

"Nigeria is already collating this information through the Extractive Industry Initiative process and will extend it to other sectors,” Buhari said. “We welcome the proposal by developed countries to work together to improve the access of developing countries to beneficial ownership information for use in public contracting.”

During the summit, six countries – including Nigeria, Britain, Afghanistan, Kenya, France, and the Netherlands – agreed to publish registers of owners of companies in their territories. Six more, including Australia, said they will consider publishing their company ownership registers.

President Buhari said he welcomed a proposal to restrict the ability of corrupt persons to travel, invest, and do business overseas.

"We commit to joining the pilot initiative for automatic exchange of beneficial information,” the president said. “Nigeria commits to deploying public-private information sharing partnerships to bring together governments, law enforcement, regulators and the financial sector to detect, prevent and disrupt money laundering linked to corruption.”

According to a communique published on Thursday by the UK Prime Minister's office, "Corruption is at the heart of so many of the world’s problems.  It erodes public trust in government, undermines the rule of law, and may give rise to political and economic grievances that may, in conjunction with other factors, fuel violent extremism."