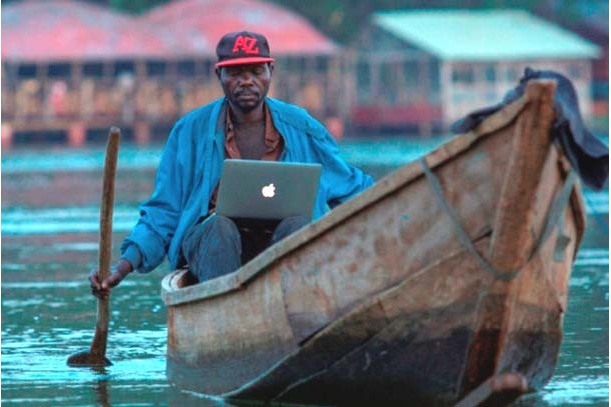 Stephen Simiyu won the Grand Prize of $2,000 for his photograph of a fisherman using a laptop in a canoe on Lake Victoria in Uganda.

A Kenya photographer, Stephen Simiyu, has won the Grand Prize for the Africa 2016 Photo Competition organised by Agility, one of the world’s leading providers of integrated logistics. Simiyu won the Grand Prize of $2,000 for his photograph of a fisherman using a laptop in a canoe on Lake Victoria in Uganda.

The winners of the Africa 2016 Photo Competition were announced on Friday by Agility. The annual contest, now in its second year, is a pan-Africa photography competition focusing on Africa’s rapid modernization. The competition is arranged in three categories, 1) Industry, which features photos that illustrate the strides Africa is making in productivity, commerce, consumer demand and investment; 2) Technology, which receives entries for photos that show how people use technology to improve their lives or that showcase Africa’s technological innovation; and 3) Cities, a category for photos that capture stories of urban life across Africa.

The winners were Simiyu, a photographer from Nairobi, Kenya (Technology); Henry Oliver Hakulandaba, an environmental consultant and photographer from Harare (Cities); and Esdore Hakizimana, a machine operator from Kigali, Rwanda (Industry). A cash prize of $2,000 was awarded for each competition category, with the Grand Prize winner receiving an additional $2,000.

“I know Africa is developing, and to show this, I needed an image that could tell that story in one picture,” said Simiyu. “The competition really made me think about Africa – there’s nowhere like it.”

Apart from Simiyu’s winning image which depicts a fisherman in a canoe on Lake Victoria on his laptop, the other winning images are a solar farm in Rwanda powering 15,000 homes (Hakizimana), and the skyline of Harare, Zimbabwe (Hakulandaba).

“Whenever I exhibit images of Harare or any other African city, there is always someone who says they never thought Africa has such development,” said Hakulandaba, winner in the Cities category. “This competition is a platform to reach a wider audience about African development. It will help change perspectives of the continent’s potential.”

The winning photographs and the runners-ups were featured at a session at the United Nations General Assembly in New York earlier this month and will be shown at the Thomson Reuters Africa Summit 2016 in Cape Town in October. They will also be showcased in Forbes Africa, on CNBC Africa, and in Agility’s corporate magazine, Tradelanes.

“The winning images speak eloquently about the historic change underway in Africa and the opportunities for Africans, African businesses and the world,” said Geoffrey White, CEO of Agility Africa. “As a company investing in the logistics infrastructure of the continent, we are proud to show the world powerful images that capture a more positive view of Africa and demonstrate the progress that has already been made, hopefully changing the perceptions of Africa in 2016.”

According to the global logistics company, this year’s competition drew more than 2,500 photographs from professional and amateur photographers in 30 countries. An independent panel of judges for the competition consisted of Sneha Shah, Managing Director of Thomson Reuters Africa; Bronwyn Nielsen, Editor-in-Chief of CNBC Africa; and Salim Amin, Chairman of CameraPix and co-founder of Africa24 Media.