John Kerry to discuss economy, anticorruption, others during visit to Nigeria 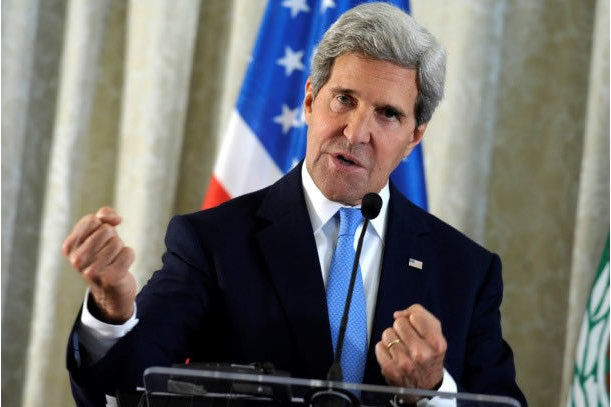 While in Abuja, Kerry will meet with Northern governors and religious leaders as well as a group of adolescent girls working to change community perceptions that devalue the role of girls in society.

The United States Secretary of State, John Kerry, is scheduled to visit Nigeria next week to discuss the ongoing counter-insurgency against Boko Haram, the Nigerian economy, the anticorruption campaign, and human rights issues, according to a statement released today by the U.S. Embassy in Nigeria.

The announcement of Kerry’s visit to Nigeria comes days after Boko Haram released a new footage of the Chibok schoolgirls, who have been in abduction since 2014 by the terrorist group.

The U.S. Embassy said Kerry will be in Nigeria on August 23 to 24 to meet with President Muhammadu Buhari. While in Abuja, Kerry will also meet with Northern governors and religious leaders as well as a group of adolescent girls working to change community perceptions that devalue the role of girls in society.

The U.S. Secretary of State will also travel to Sokoto, in the northwest of Nigeria, to deliver a speech on the importance of resilient communities and religious tolerance in countering violent extremism.

In March last year, Boko Haram declared allegiance to the Islamic State of Iraq and Syria (ISIS), which the United States has been fighting against in the Middle East as the militant group spreads its ideology around the world. ISIS recently appointed Abu Musab al-Barnawi as the new leader of Boko Haram. However, Abubakar Shakau insists he remains the leader of the group, leading to an indication of a leadership tussle in the Nigerian terrorist organization.

Before visiting Nigeria, Kerry will travel to Nairobi, Kenya on August 22 to meet with President Uhuru Kenyatta to discuss regional security issues, counterterrorism cooperation, and other bilateral issues.

He will also meet with Kenyan Foreign Minister, Amina Mohamed, and other regional foreign ministers to discuss key challenges in East Africa, including the prospects for resumption of a political process in South Sudan and support to Somalia’s political transition and ongoing fight against al-Shabaab. The US top diplomat will have the opportunity to meet with participants of the Young African Leaders Initiative and the Mandela Washington Fellows programmes while in Kenya, the US Embassy said.

After departing Nigeria, Kerry will travel to Jeddah, Saudi Arabia on August 24 to 25 for a series of meetings with senior Saudi leaders and other dignitaries to discuss the ongoing conflict in Yemen and efforts to restore peace and stability. The meetings will also discuss the region’s most pressing challenges, including the war in Syria and the global effort to counter IS and violent extremism.