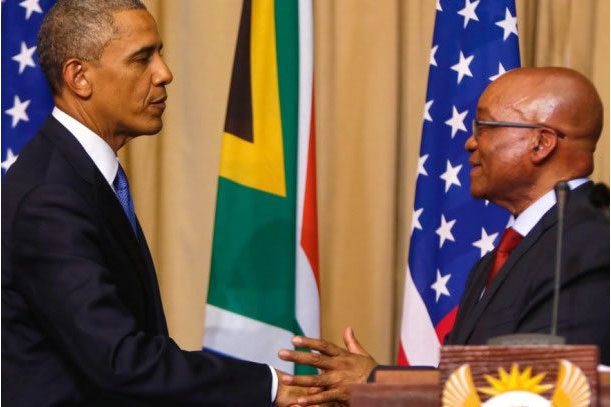 South Africa has restricted imports of U.S. poultry imports for 15 years, beef imports for 12 years and pork for the past three years

In a White House statement on November 5, Obama warned that the United States will suspend South Africa’s duty-free access to the lucrative US market for its agricultural exports. Obama said, “In accordance with sections 506A(d)(4)(C) and 506A(c) of the African Growth and Opportunity Act (AGOA), I am providing 60-day advance notification of my intent to suspend the application of duty-free treatment to all AGOA-eligible goods in the agricultural sector for the Republic of South Africa 60 days after the date of this notification.”

South Africa has restricted imports of U.S. poultry imports for 15 years, beef imports for 12 years and pork for the past three years. The two governments have been negotiating to end the row over the past few years. Despite the long-running dispute, South Africa was included in the new version of the AGOA which was re-authorised by the U.S. congress in June, extending it for another 10 years. The legislation was first enacted in 2000 to improve the economic relations between the United States and eligible Sub-Saharan countries.

Obama further said, “I am taking this step because South Africa continues to impose several longstanding barriers to U.S. trade, including barriers affecting certain U.S. agricultural exports, and thus I have determined that South Africa is not making continual progress toward the elimination of barriers to United States trade and investment as required by section 104 of AGOA.”

Rob Davies, South African Trade and Industry Minister, said on Tuesday that both governments were negotiating the issues and were close to a deal. Davies said he believed U.S. poultry, meat and pork could start entering South Africa by the end of the year.

Meanwhile, a bill has been passed by the South African Parliament that would require US and other foreign owners of private security companies to sell off majority stakes to South Africans. Laird Treiber, Economic Counselor at the U.S. Embassy in Pretoria, said if such a bill is signed by President Jacob Zuma, it would be deemed as expropriation.

President Obama said the he will continue to assess whether South Africa is making continual progress toward the elimination of barriers to United States trade and investment in accordance with AGOA eligibility requirements.