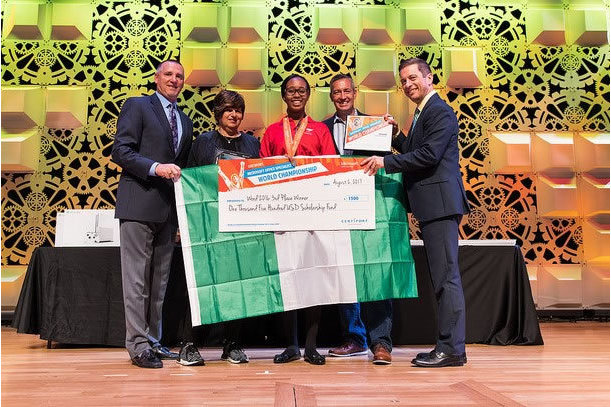 Zenith Bank and Readmanna supported Katherine Eta in her trip to the United States and she was the only African student to win a medal in the competition.

Eta competed against 156 other finalists from 49 countries to take home the third prize for the Microsoft Word 2016 category.

First, second and third place winners were separately announced for Microsoft Word, PowerPoint and Excel, 2013 and 2016 versions. The winners were from countries and territories including Romania, Vietnam, Macao, Hong Kong, Bulgaria, China and USA.

In the concluding round of the competition, competitors participated in unique project-based tests to demonstrate their ability to create documents, spreadsheets, and presentations for the information presented in Word, Excel, and PowerPoint. Certiport and Microsoft recognized the top competitors at the MOSWC Student Awards Ceremony at the Disneyland Hotel in Anaheim, California. Each first-place winner was presented with a $7,000 cash prize, second place $3,500 and third place $1,500.

“The Microsoft Office Specialist World Championship is inspiring – not only because these students won an impressive award, but because they have gained valuable workforce skills that will benefit them throughout their academic and career pursuits,” said Aaron Osmond, General Manager at Certiport. “The best part is watching the champions go home and then report back to us with all of the amazing things they are doing academically and in the workforce.”

MOS certification is the only official Microsoft-recognized certification for Microsoft Office globally and serves as a powerful instrument for assessing student skills and preparing students for real-world application.

“We are proud to support the MOS World Championship and grateful to meet young people from all parts of the world who have discovered the power of Microsoft Office skills for productivity and employability,” said Anneleen Vaandrager, Senior Director, Education Industry at Microsoft. “The competition itself is the experience of a lifetime but every participant, all 560,000 of them, earned MOS certification to bolster their employability opportunities.”

Next year, Certiport will host the 2018 MOS World Championship in Orlando, Florida.

Zenith Bank and Readmanna supported Eta in her trip to the United States and she was the only African student to win a medal in the competition.