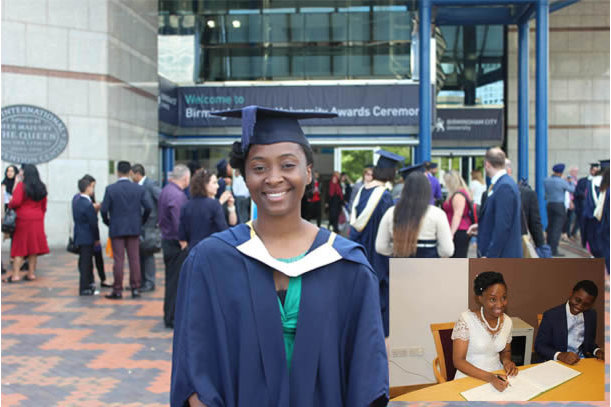 Anu Yusuf graduated with a first-class degree from Birmingham City University, United Kingdom, last week on July 27 and got married on the same day at the Birmingham Register Office.

According to a statement released today by the Birmingham City University, 26-year-old Anu Yusuf received her Law LLB in a ceremony at Symphony Hall alongside hundreds of other students last week. Hours later, she was dressed up in her wedding gown as she tied the knot with her long-time fiancé, 27-year-old Joseph Kolawole Ola.

“My husband often joked that he would whisk me away after my graduation to marry me because he can no longer wait. So, we decided to marry on my actual graduation day,” Anu said. “Romance aside, it certainly worked well logistically too, as it meant that our relatives only had to travel once for both occasions. We both have family all over the UK and we were conscious of taking up too much of their time and for all the added expense in making the same journey twice.”

Anu and Joseph met four years ago during their national assignment as National Youth Service Corps (NYSC) members in Gombe State, in the north-east of Nigeria.  Anu had graduated with double honors in English Education from Adekunle Ajasin University
in 2010. She finished with second class lower degree.

According to the university, the civil wedding ceremony started at 10.40am at Birmingham Register Office. After the official wedding photography session, the entire party headed for blessings at Anu’s church, VBCI Treasure Sanctuary, located at Perry Barr Methodist Church, north of the City. After the wedding ceremony, Anu changed from her wedding dress into another as she went back to Birmingham city centre to receive her first-class degree.

“I’d be lying if I was to say it wasn’t a relief to get to the end of the day, but I wouldn’t have changed it for the world. It was so special to have my family and friends present for not one, but two of the most significant milestones in my life, and being able to share it with them all is something that I will treasure forever,” Anu said.

Anu hopes to further her studies by embarking on a PhD in Law and her husband is studying in Bradford at LIFE Church College.