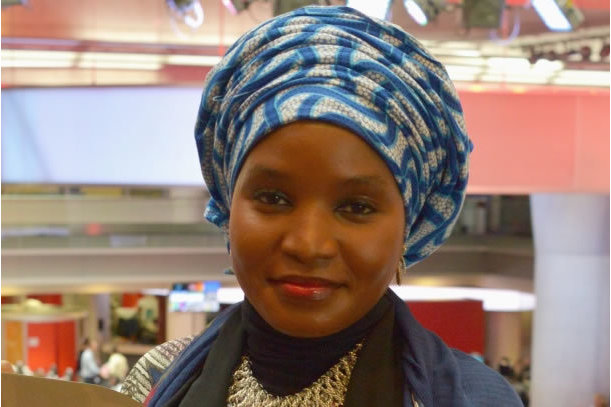 Amina, who hails from the northern Nigerian town of Yola, is a presenter on the 8pm news on Gotel Television in north-eastern Nigeria.

Amina, who hails from the northern Nigerian town of Yola, is a presenter on the 8pm news on Gotel Television in north-eastern Nigeria.  A well-known and respected face locally, she has reported on a range of the region’s high-profile news stories, including the Boko Haram insurgency.

As she accepts the BBC World News Komla Dumor Award at a ceremony in the BBC Radio Theatre in London, Amina begins her three month placement at the BBC.

To kick off, Amina attended a course with the BBC Academy. She will then join BBC News teams - across TV, radio and online – which will provide her with the opportunity to gain skills and experience across BBC News’ multifaceted platforms. Towards the end of her placement, Amina will have the opportunity to travel to a country in Africa, with a top BBC producer, to report on a story for a global audience. The story will then be broadcast on BBC platforms, which reach audiences of 348 million across the world each week.

Amina said, “I was overwhelmed with joy, when I heard that I had won.  In Africa, storytellers have always had an important role, relaying culture, traditions and history. This is what defines us. Today journalists are taking on that responsibility, and to bring African stories to a global BBC audience is a huge honour. I am thrilled to have the opportunity to continue the work of the previous winners of the Komla Dumor Award, Nancy Kacungira and Didi Akinyelure.”

BBC said Amina was outstanding with her tenacity and superb story telling ability. Much like Komla, Amina is committed to challenging preconceived stereotypes by asking the questions that provide clarity, unlock insights and have the potential to deepen understanding. Her passion for telling these stories will resonate with BBC’s global audiences.

Francesca Unsworth, Director of BBC World Service Group and Deputy Director of News and Current Affairs, said, “The BBC World News Komla Dumor Award was established to recognise and empower Africa’s leading talent in journalism. Komla was highly respected, not only among his peers, but also by audiences across the continent and beyond. To find someone who possesses many of Komla’s qualities is something for us to celebrate, and we are very excited about working with Amina.” The award was set up in honour of presenter Komla Dumor who died in January 2014 and aims to continue Komla’s legacy by celebrating African journalism and finding exceptional talent. The judging panel included Rachael Akidi, editor of the BBC's Focus on Africa radio programme; Paul Royall, editor of the BBC’s Six and Ten o'clock news in the UK; and Khadija Patel, editor-in-chief of South Africa's Mail & Guardian newspaper.