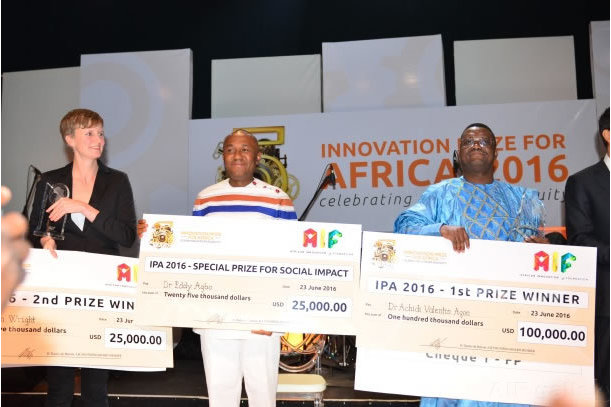 Past winners and nominees of the IPA have been supported with approximately $1 million to move their projects forward.

Two Nigerians have emerged among 10 nominees shorted for the 2017 Innovation Prize for Africa (IPA), according to a statement released today by the African Innovation Foundation (AIF).

“By providing platforms to recognize innovation excellence in Africa and mobilizing for African innovators, we continue to live up to our credo of engaging, inspiring and transforming,” said Walter Fust, Chairman of AIF. “The inspiring stories of these nominees remind us that innovation and African-led solutions are indeed the answer to Africa’s growth and prosperity.”

The selected nominees will pitch their projects to the IPA panel of jurors during the closed pitch sessions on July 15th and 16th in Accra. Following their pitch, three winners will be selected and announced during an awards ceremony slated for July 18th, 2017 at the Mövenpick Ambassador Hotel, Accra.

The 2017 IPA edition witnessed a record number of entries from over 2,530 innovators across 48 African countries. Now in its sixth year, the IPA has attracted more than 7,500 innovators from 52 African countries. Past winners and nominees of the IPA have been supported with approximately $1 million to move their projects forward. Due to exposure generated by IPA, past winners have also gone on to secure over $30 million in investments to grow and scale their businesses, AIF said.

“Over the years, IPA has stimulated impactful and market-oriented innovations aiming at changing lives and transforming Africa,” said Pauline Mujawamariya Koelbl, IPA Director. “In this sixth edition, we want to promote more investment in home-grown innovations as well as intra-African collaboration and trade to allow the scaling up of viable innovations across borders.”