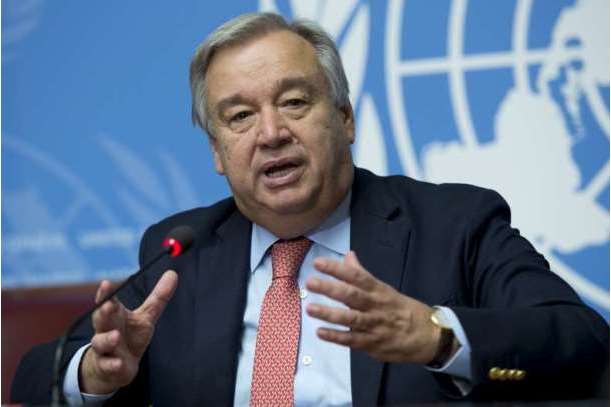 Guterres said his five priorities for the year ahead are: diplomacy for peace; ambitious climate action; acceleration towards the sustainable development goals; better governance over new technologies; and stronger UN values worldwide.

The United Nations (UN) Secretary-General, Antonio Guterres, announced his top five priorities for 2019 on Wednesday while delivering his New Year message at the UN headquarters in New York.

In a statement released by the UN, Guterres unveiled his five priorities for the year ahead as: diplomacy for peace; ambitious climate action; acceleration towards the sustainable development goals; better governance over new technologies; and stronger UN values worldwide.

The UN chief highlighted some major achievements the multilateral organisation recorded in 2018, among which he said were progress towards forging peace in Yemen, the Korean peninsula, South Sudan, as well as between former enemies Ethiopia and Eritrea. He also mentioned renewed engagement for peacekeeping operations, major steps taken to reform the UN, and the global compacts on migration and refugees as some of last year's key international achievements.

With regard to ramping up diplomacy, Guterres said partnerships are important, especially in Africa, where the international community needs to consolidate gains, particularly in the Sahel, Mali, South Sudan, Somalia, the Central African Republic and the Democratic Republic of the Congo.

“As we strive to end conflicts around the world, we understand that lasting peace must be based on a broad consensus of society, with women as full participants in all peace processes,” the UN chief added.

According to the statement released by the UN, Guterres noted “there is no greater challenge to the world of today and tomorrow” than climate change. For this reason, the UN chief urged for greater ambition  by political leaders, the business community and civil society on mitigation, adaptation, finance and innovation.

After the Climate Change Summit in September 2018, the UN Secretary-General invited Heads of State and Government for another summit in September of this year. The 2019 summit will be focused on how to accelerate actions towards the sustainable development goals. The summit will include three prominent meetings on financing for development, universal health coverage and the risks faced by Small Island Development States.

“Every member state should have a sharper focus on what works in reducing poverty and inequality, and in delivering strong and inclusive economies while safeguarding the environment – and we need increased financing for those solutions,” said the UN Secretary-General.

On addressing the challenges presented by new technologies, he said the UN’s efforts on this front in 2019 will focus on “reducing digital inequality, building digital capacity and ensuring that new technologies are on our side as a force for good.”

Guterres stated the universal values of the United Nations Charter as what bind the global community together. He said those values are under attack around the world as "noxious views" of past era are moving into the mainstream.

The United Nations Secretary-General went on to call for deeper efforts to “show that we understand people’s anxieties, fears and concerns” and to “address the root causes that lead people to feel marooned in our rapidly changing world.”