Biden calls for unity in his inaugural speech as US President 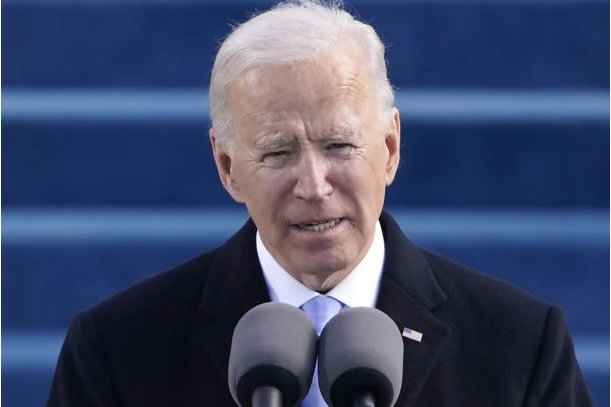 Shortly before he took the oath of office, Kamala Harris made history as the first female, first black and first Asian-American US vice-president.

Following his swearing-in as the 46th President of the United States, Joe Biden said today that tackling the challenges of the country, restoring its soul, and securing the future of America require much more than words. He said it requires unity.

Biden who is the oldest US president to take the oath of office called on every American to join him in the cause of unifying the country and fighting against its foes, which he described as anger, resentment and hatred. He also called for unity to fight against extremism, lawlessness, disease, joblessness, and hopelessness.

"With unity we can do great things, important things. We can right wrongs, we can put people to work in good jobs, we can teach our children in safe schools," Biden said. "We can overcome the deadly virus, we can rebuild work, we can rebuild the middle class and make work secure, we can secure racial justice and we can make America once again the leading force for good in the world."

Shortly before he took the oath of office, Kamala Harris made history as the first female, first black and first Asian-American US vice-president. She was sworn into office by Supreme Court Justice Sonia Sotomayor.

In his inaugural address, Biden said Americans should see each other not as adversaries but as neighbours and treat each other with dignity and respect. He noted that without unity there is no peace; there is only bitterness and fury, adding that "unity is the path forward."

Biden – a member of the Democratic Party – spoke amid reports of resentment by most Republicans to the president's electoral victory over Donald Trump in the November 2020 election. 72 per cent of likely Republican voters said they continue to question the presidential election results, according to a poll released earlier this month by Vox and Data for Progress.

Since the election in November, Trump continued to repeat unfounded allegations of election fraud. These allegations appeared to have influenced how many Republican voters perceived the electoral outcome.

During his address on Wednesday, Biden urged Americans to reject the culture in which facts are manipulated and even manufactured. He said the country was facing an attack on democracy, and truth. He called on the nation to defend the truth.

"There is truth and there are lies. Lies told for power and for profit. And each of us has a duty and a responsibility as citizens as Americans and especially as leaders. Leaders who are pledged to honour our Constitution to protect our nation. To defend the truth and defeat the lies," Biden remarked.

For those who did not support his emergence as president, he pledged to be their president and fight for them. He said: "I pledge this to you. I will be a President for all Americans, all Americans."

Biden who previously served as the 47th US vice president from 2009 to 2017 under Barack Obama asked the country to set aside politics and tackle the COVID-19 pandemic as one nation. The US has the highest burden of the coronavirus disease. As of today, the country has recorded over 24 million cases and 412,347 deaths, according to data from Worldometer.

Biden has become the US president some forty-seven years after he first became a Senator and 33 years since his first presidential bid. He pledged to defend America and give the country his all.

To the international community, Biden gave his assurances to repair US alliances and engage with the world once again, adding that, "we'll lead not merely by the example of our power but the power of our example."

Biden's predecessor, Trump, did not attend Wednesday's inauguration. The former president had announced on January 8th that he would not attend his successor's ceremony. “To all of those who have asked, I will not be going to the Inauguration on January 20th,” Trump had tweeted from his account, which is now permanently suspended by Twitter for his incitement of violence against the US Capitol on January 6, 2021 by a mob.

One week later, the House of Representative, accusing Trump of "incitement of insurrection," impeached him for a second time. The former president is awaiting an impeachment trial at the Senate.