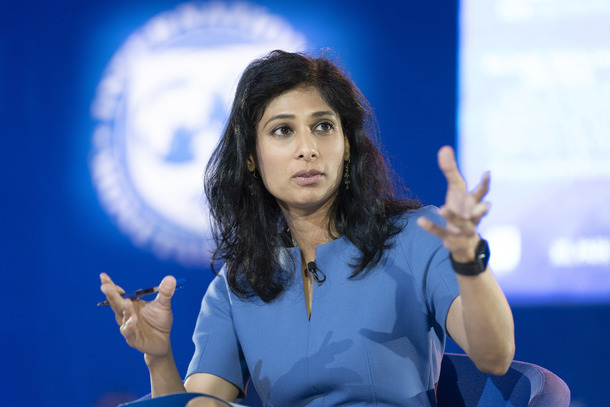 Economic Counsellor and Director of the Research Department at the International Monetary Fund, Gita Gopinath

The IMF has slightly lowered its global growth projection for 2021 to 5.9 percent while keeping unchanged its forecast for 2022 at 4.9 percent. In a statement today, IMF said this modest headline revision masks large downgrades for some countries in its World Economic Outlook (WEO) released, Tuesday, in Washington, DC.

“The global recovery continues, but momentum has weakened, hobbled by the pandemic,” said Gita Gopinath, Economic Counsellor and Director of the Research Department at the International Monetary Fund. “We have a slight downward revision for global growth for this year to 5.9 percent for next year, our projection remains unchanged at 4.9 percent. The divergences in growth prospects across countries, however, persist and remains a major concern.”

In its WEO update in July 2021, IMF maintained its April forecast of 6 percent for global growth for the year, “but with offsetting revisions.” It raised its projection for 2022 from 4.4 percent to 4.9 percent.

IMF said in July that the prospects for emerging market and developing economies had been marked down for 2021, especially for Emerging Asia. By contrast, the forecast for advanced economies was revised upward.

However, in announcing the latest update of the WEO, Gopinath said that risks to economic prospects have increased, and policy trade-offs have become more complex in the ongoing Covid-19 pandemic and noted that monetary policy will need to walk a fine line between tackling inflation and financial risks and supporting the economic recovery.

“One of the major risks remains that there could be new variants of the virus that could further slow back the recovery. We're seeing major supply disruptions around the world that are also feeding inflationary pressures, which are quite high and financial risk taking also is increasing, which poses an additional risk to the outlook,” explained Gopinath.

IMF said the “dangerous” divergence in economic prospects across countries remains a major concern and blames it on the ‘great vaccine divide’ and large disparities in policy support.

According to the October forecasts, the Advanced Economies will grow in 2021 by 5.2 percent (compared to 5.6 percent in the July forecast); United States is projected to growth by 6.0 percent (slashed from 7 percent); and Euro Area by 5.0 percent (upward review from 4.6 percent). Emerging Market and Developing Economies' growth forecast is 6.4 percent (6.3 percent in July); China 8.0 percent (marginally slashed from 8.1 percent). Sub Saharan Africa is projected to grow at 3.7 percent (up from 3.4 percent). While Nigeria's growth projection at 2.6 percent (up from 2.5 percent) is below the regional average, South Africa is expected to post 5.0 percent growth in 2021 (up from 4.0 projection in July).

“The foremost priority is to vaccinate the world. Much greater multilateral action is needed to vaccinate at least 40 percent of the population in every country by the end of this year and 70 percent by the middle of next year. We also need much greater action to address climate change. Individual countries will need to tailor their fiscal and monetary policy to the country's specific conditions, to the health conditions in their country, to their economic conditions, while also maintaining the credibility of their fiscal and monetary frameworks,” said Gopinath.