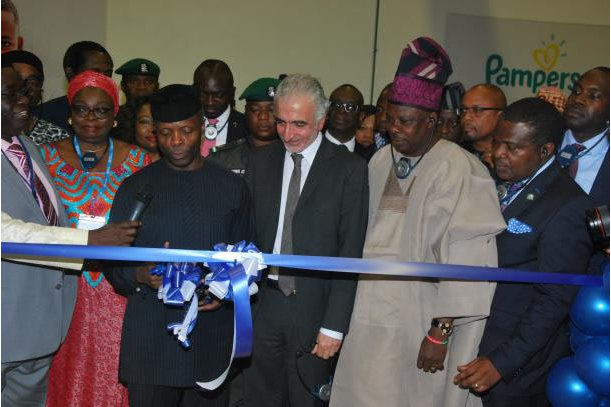 Osinbajo hailed the investment as being in tandem with the drive of the current administration for domestic production and human capital development.

Speaking during the commissioning of the state-of-the-art facility, Managing Director, P&G Nigeria, George Nassar, said: “P&G’s growth and expansion plans for Nigeria are long-term. This investment is a testament to the industrial and infrastructural advancement that P&G is bringing not only to Nigeria, but to Africa as a whole.”

He said the new line expresses the determination of the company to continue to serve Nigerian girls and women.

The Governor of Ogun State, Senator Ibikunle Amosun, who was present at the commissioning commended P&G for locating the factory in the state. He said: “Ogun state is fast becoming a global destination for investment. We look forward to embracing innovations, initiatives and more companies willing to support the vision of the Federal Government through local production.”

Other dignitaries who were present at the event include Yetunde Oni, Director General, National Agency for Food and Drug Administration and Control.

P&G started operations in Nigeria in 1992 with the acquisition of the Richardson Vicks manufacturing plant in Ibadan. Local production of Vicks and Always began in 1993 and Pampers in 1994. Since then, P&G has continued to expand its investment in Nigeria. The company commissioned a $300 million manufacturing plant, also in Agbara, Ogun State in 2014.