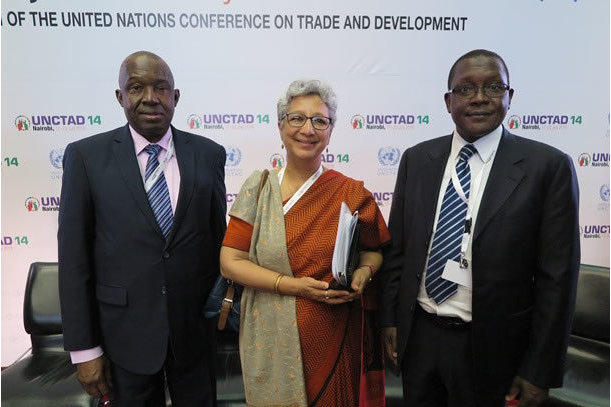 According to UNCTAD Secretary General, Mukhisa Kituyi, UNCTAD14 is expected to witness more than $14 billion deals.

Heads of State, policymakers and trade experts from around the world are meeting in Kenya for the 2016 quadrennial conference of the United Nations Conference on Trade and Development (UNCTAD). The 2016 conference, which is the 14th in the series, has the theme: “From decisions to actions, moving towards an inclusive and equitable global economic environment for trade and development.”

Nigerian Export-Import Bank (NEXIM Bank), led by the Acting Managing Director and CEO, Mr. Bashir Wali, is participating at the quadrennial conference which, according to UNCTAD Secretary General, Mr. Mukhisa Kituyi, is expected to witness more than $14 billion deals.

Mr. Wali is also the Honorary President of the Global Network of Export-Import Banks and Development Finance Institutions (G-NEXID), whose objective is to boost bilateral and multilateral cooperation among its members for the promotion of South-South trade and investment flows. He took over the leadership of the association in April 2016 following the exit of the former Honorary President and CEO of NEXIM Bank, Mr. Roberts Orya.

UNCTAD14 will discuss issues related to intellectual property, trade, commodities, global investment and development. The five-day meeting (July 17 – 22) is part of the UNCTAD’s tradition in which the agency holds a conference every four years to consider trade and development challenges and agree on collective solutions.

At the Ministerial Round-table discussion on "Lowering Hurdles for Trade: Trade Costs, Regulatory Convergence and Regional Integration,” participants discussed strategies for reducing the trade cost impact of domestic regulation. Participants agreed that trade policy can be aligned with sustainable development objectives by actions including simplifying and enhancing the transparency of regulatory and procedural requirements.

Efficient trade regulation, within the framework of regional integration, can help extend productive capacity of firms. Also, coordinating the regulation design process can help the cooperating countries to achieve regulatory coherence. Participants said lowering the hurdles for international trade can help firms from developing countries to be winners from trade which can act as a catalyst for sustainable development.

President Uhuru Kenyatta on Sunday officially opened the conference at the Kenyan International Conference Centre, calling for deeper and broader cooperation between trade and development.

The highest decision-making body of UNCTAD is the quadrennial conference, at which member States make assessments of current trade and development issues, discuss policy options and formulate global policy responses. The conference also sets the organization’s mandate and work priorities.