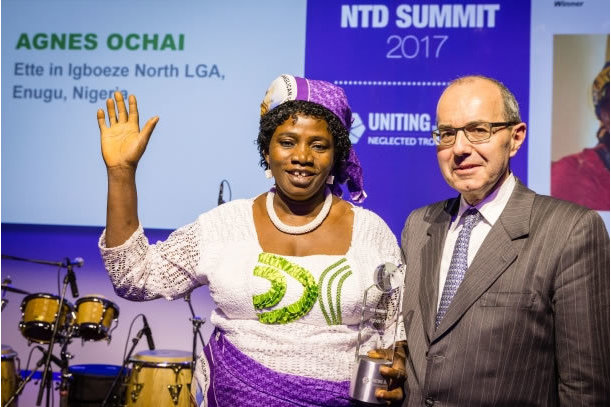 Ochai was declared winner of the Women in Focus Community Champion Award, an international award for the crucial role women play in the fight against Neglected Tropical Diseases.

Agnes Ochai receiving the award at a ceremony in Geneva, Switzerland

Agnes Ochai, a Nigerian health worker from the village of Ette, Enugu State, was declared the winner of the Women in Focus Community Champion Award, an international award for the crucial role women play in the fight against Neglected Tropical Diseases (NTDs). Ochai was invited to accept the award at a ceremony during the NTD Summit 2017, which held in Geneva, Switzerland, from April 19-22.

The Community Champion Award is one of the four categories in the inaugural Women in Focus Awards 2017, organised by the Uniting to Combat NTDs, the World Health Organization and the NTD community.

“The Community Champion Award specifically shines a light on women from all over the world who are working in their local communities, making a remarkable impact on tackling Neglected Tropical Diseases," said Dr. Wendy Harrison, Chair of the Neglected Tropical Disease NGDO Network (NNN). "It is a real honor to acknowledge Agnes for the inspirational work she is doing in Nigeria, in exceptionally hard circumstances. The standard of entries in the competition was incredibly high so she should be justifiably proud of her achievement.”

Ochai, who is also a farmer, suffers from a skin disorder called onchocercal dermatitis, often known as leopard skin, because of the depigmentation patterns it causes. She was nominated by Jesse Bump, a Lecturer on Global Health Policy at Harvard University. Bump said Ochai was abandoned by her husband and her community, but she stayed strong for her two young children.

The Nigerian health worker used her own experience to start helping other people in the village, becoming a Community Drug Distributor, and reaching out to other women at risk of exclusion. She was described as being selfless and showing unwavering personal courage and strength in difficult circumstances.

"There is no one more deserving of this incredible award,” Bump noted.

The Women in Focus awards is inspired by the WHO’s 2020 Roadmap on NTDs and the ‘London Declaration’ to control or eliminate at least 10 NTDs by the end of the decade.