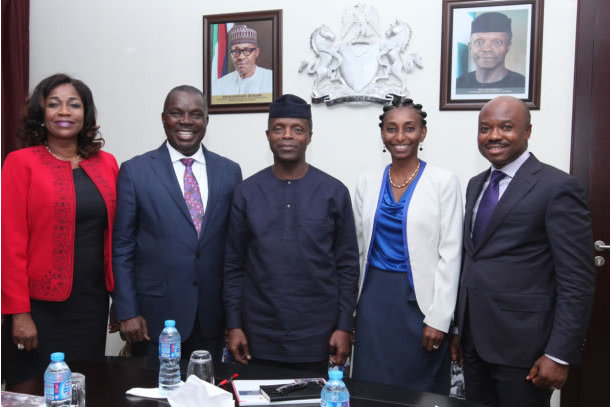 Seplat Executives at the Office of the Vice President, Prof. Yemi Osinbajo

Seplat Petroleum Development Company released its interim management statement and consolidated interim financial results for the three months ended 31 March, 2016 on Friday, showing that revenue from its gas business increased by 145 percent year-on-year to $27 million in the first three months of 2016.

“Despite these challenging circumstances, I am pleased to report that we continued to supply an average gross rate of 224 MMscf/d sales of gas into the domestic market and that the business remains on a sound financial footing with strong fundamentals that together provide resilience to such setbacks,” said Austin Avuru, Seplat’s Chief Executive Officer.

With a strategy to become a preeminent supplier of natural gas in the Nigerian domestic power sector, Seplat said earlier in April that it invested over N60 billion ($300 million) in gas projects over the last two years. The investment raised gross gas production from an average of 90 MMscfd in 2012 to around 300 MMscfd in 2015. The firm has signed gas supply contract agreements with several power projects in Nigeria including Azura Power, Sapela Power Plant, Geregu Power Plant and Nigerian Gas Company.

However, the company said total production during the first three months of 2016 fell by 5 percent to 34,179 boepd (compared to 35,811 boepd for the same period in 2015) due to the ongoing shut-in at the Forcados oil terminal. Its liquids production was down 38 percent to 17,392 bopd in the same period, even as gas production increased.

For the period under review, Seplat said average oil price was $35.4 per barrel compared with $52.8 per barrel in the same period of last year.

“Our first quarter results reflect the impact of the shut-in and suspension of oil exports at the Forcados terminal from mid-February onwards,” said Seplat’s CEO. “However, we are in the final stages of establishing a temporary export solution via the Warri refinery jetty with our off-taker Mercuria to resume oil production, albeit at reduced levels.”

In February, Royal Dutch Shell declared a force majeure on crude oil liftings from the Forcados oil terminal after Niger Delta militants blew up a major trunk of the Forcados oil pipeline system.