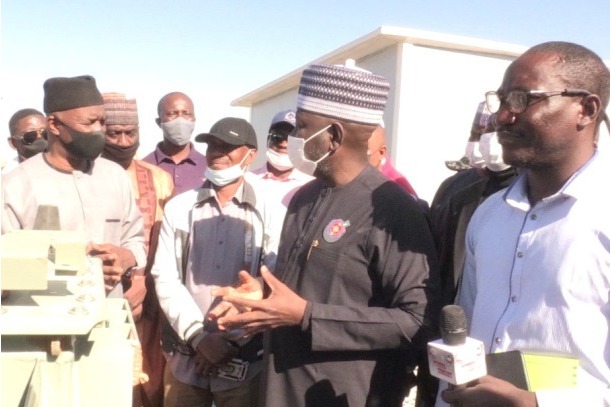 Only two system collapses occurred throughout 2021, a major milestone achievement compared to previous years when the system collapsed several times within a year.

0 Comments
Minister of Power, Abubakar Aliyu (2nd right), while speaking to journalists during his joint tour of power transmission facilities in Kastina State with Ag. MD/CEO of TCN, Sule Abdulaziz

The Minister of Power, Abubakar Aliyu and the Acting Managing Director and CEO of Transmission Company of Nigeria (TCN), Sule Abdulaziz, have undertaken joint inspection of TCN’s substations and the Lambar Rimi Windmill Project in Katsina State. The inspection tour, which took place on the eve of 2022, was to ascertain the level of completion of the projects and their capacity to increase bulk power delivery in Katsina and its environs, as well as enable the ministry to adequately intervene to facilitate the projects’ completion.

Speaking to the press after the Katsina 330kV Substation project inspection, the honourable minister noted that the power sector in Nigeria attained a commendable level of stability in 2021, with only two system collapses throughout the year, which is a major milestone achievement when compared to previous years when the system collapsed several times within a year.

He noted that the federal government was working to further enhance system stability with the Siemens Project, which will intervene in transmission and distribution capacities in the first and second phases, to bring them to 7,000MW and 11,000MW, respectively. In the third phase, intervention will include generation capacity, with the aim of raising the industry capacity of the power sector to 25,000MW. According to Mr. Aliyu, this is part of the efforts by the government to enhance power-related businesses and economic activities in the country.

Speaking at the occasion, Dr. Abdulaziz said the Katsina Substation was initially awarded years ago. After it had been abandoned, it was resuscitated last year because of the importance and strategic location of the substation in that northwest axis. He said work is ongoing in the switchyard with two 60MVA power transformers already on plinth, and that TCN is awaiting delivery of two 150MVA power transformers for the 330kV part of the substation. According to him, work is almost complete on the administrative block, while the execution of the 330kV transmission line from Rimi Zakara to the substation has reached Zakara town and advancing.

The substation was initially designated as a Work Centre in 2020 and was later upgraded to substation status in 2021 by the current management of TCN working with the administration. When completed, the Katsina Substation will supply bulk power to six 132kV substations, three already existing, namely Kankiya, 132kv Katsina, and 132kV Daura; the other three – Kankara, Dutsin-Ma, Kurfi and Malumfashi – are ongoing.

While at the Kankia 2x60MVA 132/33kV Transmission Substation, the minster inspected materials stowed at the substation yard meant for the ongoing construction of the 330kV transmission line from Katsina to Kano. As of the time of the inspection, construction works on the line had progressed to Tsanyawa Local Government in Kano State and ongoing. He cautioned that the government would not tolerate further delay in the transmission line execution and encouraged the contractors to bring up any challenge to the project’s execution that requires intervention for quick action.

At the Lambar Windmill Substation Project in Charanchi Local Government Area of the state, Mr. Aliyu explained that a number of procurements were made by the Ministry of Power, under the Presidential Power Initiative which is targeted at systematically increasing the country’s electricity capacity to 25,000MW.

Awarded in June 2009 by the power ministry, the Lambar Windmill project was designed to generate 10MW of electricity for Katsina State and was to have been completed within 24 months. However, security challenge has caused protracted delay to the completion of the project after attaining a major milestone in 2012.

At the Wind Farm site, however, it was observed that of the 37 wind turbines installed, six had been vandalized. The minister confirmed that the Ministry of Power is working towards fixing the vandalized towers before the planned commissioning of the wind farm. Each of the turbines have the capacity to generate 275 kilowatts.

Earlier on, the inspection tour reached the Liyafa 33/11kV Injection Substation that will directly evacuate energy generated by the wind farm for onward distribution to electricity consumers in Katsina State.

According to TCN, the official visits which took place on the eve of 2022 signaled the determination of the honourable minister at ensuring that power projects are given the attention they require during the current year to ensure that the government’s goal for the sector is actualized.