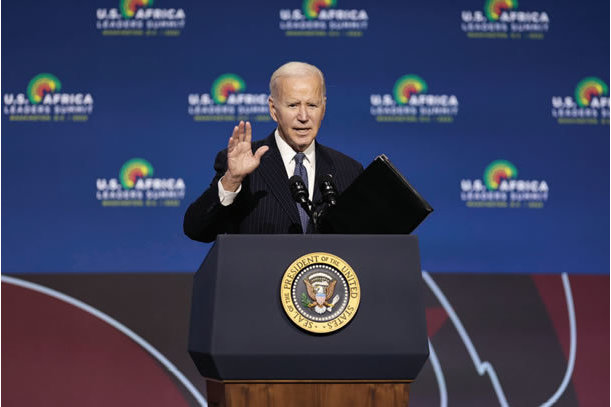 It may seem too ambitious to imagine an Africa that no longer needs aid from the United States, but it is possible.

2014 was the last time the United States hosted the U.S.–Africa Leaders Summit. Since that time, China has hosted African leaders three times (2015, 2018, and 2021). In addition to the political and economic commitments made at these events, they also represent a signalling effect. And China has been unequivocal that it is ready to invest in, and collaborate with, Africa. Trade between the two regions has risen significantly over the past two decades to more than $250 billion.

U.S. trade with Africa is roughly $83 billion. As such, it was no surprise that, during the recently concluded U.S.–Africa Leaders Summit hosted by President Joe Biden, the president remarked, “The United States is all in on Africa’s future.”

Although the United States is playing catch up, it still has a unique opportunity to partner with African countries in a meaningful and productive way.

First, assess a country’s capabilities to best understand how to partner.

A region’s capabilities consist of its resources, processes, and priorities. Resources are the most tangible of the three and include human capital, infrastructures, technology, cash, etc. Processes are the patterns of interaction, coordination, communication, and decision making through which regions transform inputs of resources into products and services of greater worth. Finally, priorities represent the actual activities that regions execute as opposed to activities they hope to execute. Priorities emerge as a result of the interactions and amalgamation of all the organization’s processes.

Most African countries have limited capabilities. For instance, national government spending per capita in Africa hovers around $650 while in the United States it’s approximately $30,000. Understanding this simple fact will help American organizations, including the U.S. government, get a sense for how to best allocate resources to projects. Much of the resources at this stage should focus on developing capabilities across the continent.

The most effective way to do this is by investing in a particular type of innovation. This leads to the next point.

Second, for the U.S. to create a sustainable partnership in Africa, it should focus on the long-term by investing in market-creating innovations.

Market-creating innovations transform complicated and expensive products into products that are simple and affordable so many more people in society can access them. These innovations target a group of people called nonconsumers – those who are unable to afford existing products on the market even though they would benefit from having access to them. These innovations are often not just products or services, they are entire systems designed to employ and serve entirely new customers.

For example, roughly a decade ago when Gregory Rockson decided to start mPharma, he wanted to build a software product that would help pharmacies better manage their stock. But he soon realized that the “product” wouldn’t solve the real problem of stockouts, affordability, and in effect, access to drugs for patients. He needed to create an entire system.

Today, mPharma not only has software to help pharmacies better manage their supply chain, but it also employs doctors, pharmacists, and owns pharmacies. mPharma has built a system with a singular focus: create an Africa where people have access to affordable healthcare services.

Starting from almost nothing two decades ago, today, there are more than one billion mobile phone subscriptions in Africa. This industry supports three million jobs, provides billions of dollars in taxes, and has created economic value worth hundreds of billions of dollars.

This is the power of market-creating innovations. If the United States supports these types of innovations across Africa, it will undoubtedly create an endearing partnership on the continent.

Finally, have a goal to transform the United States from simply an aid provider to a trading partner.

It may seem too ambitious to imagine an Africa that no longer needs aid from the United States, but it is possible. Decades ago, the United States provided economic assistance to Japan, South Korea, and Taiwan, but today trade with the three countries surpasses more than $460 billion. That’s more than five times the $83 billion trade value between the United States and Africa.

In the 2022 Goalkeepers report published by the Bill and Melinda Gates Foundation, Bill Gates wrote, “The goal [of food aid] should not simply be giving more food aid. It should be to ensure no aid is needed in the first place.” Gates is right.

The world would be an incredibly better place with an Africa that no longer receives aid, but that elevates itself to a significant trading partner. If the United States is truly “all in on Africa’s future” this must be the driving force behind U.S. engagement on the continent.