Reparations from France should go to Haitian entrepreneurs, not the government 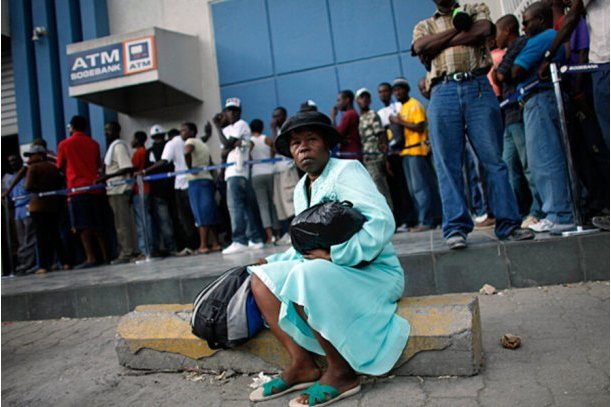 The focus must be on creating prosperity first through local entrepreneurs pioneering market-creating innovations.

0 Comments
A woman sits in front of people lining up in a bank in Port-au-Prince, Haiti.

Generations of poor Haitians paid France — its colonizer — roughly $560 million in today’s dollars. According to some estimates, if these funds had stayed in Haiti instead of moving out of the country, the Haitian economy could be eight times larger than its 2020 GDP of roughly $14.5 billion.

Attention is steadily growing on these reparation payments, as are calls for France to pay Haiti. But, as the New York Sun argued recently, payments to a corrupt government should be a non-starter because they are unlikely to lift the people of Haiti out of poverty.

Although that’s true, our research suggests one significant addendum. Waiting for an ethical government and strong institutions to come to Haiti’s rescue is equally unlikely to pull the country out of poverty. That suggests a better path forward for the dollars France owes Haiti: the French should invest them now in local Haitian entrepreneurs creating new markets that will help sow the seeds of a thriving society.

This conclusion stems from our research that has revealed that corruption does not cause poverty. It’s a symptom of it.

Scarcity, fuelled by poverty and conflict, is the perfect breeding ground for corruption to flourish.

In many poor countries, corrupt politicians embezzle state funds and civil servants like police officers extort money from everyday hard-working citizens. But in those countries, economic opportunity is scarce and most civil servants don’t earn a living wage. For them, embezzlement, bribery or extortion is an attractive way to gain wealth.

This describes Haiti. It’s the poorest country in the Western Hemisphere.

This is what happened in the United States, South Korea, and countless other countries.

How did they do it? Our research shows that the march toward prosperity begins through investments in “market-creating innovations.”

As they create new markets, these innovations alleviate scarcity through a multiplier effect. They  create jobs and provide tax revenue that can then be reinvested in communities, anti-corruption efforts, and institutions. In short, these powerful innovations spur significant economic development, while creating the conditions for good governance.

Overt corruption ran rampant in the United States in mid-19th century through the early 20th. As the effects of the Industrial Revolution spread across the country, more Americans created more wealth for themselves. Their ability to fight corruption increased.

“Politically, the rage of victims [of corruption] counted for very little in 1840, not much in 1860; by 1890, it was a roaring force,” according to Stanford Law Professor Lawrence Friedman.

The story unfolded similarly in South Korea. In the 1950s, South Korea was poor. The country was ruled by an authoritarian government. Bribery and embezzlement were prevalent.

But as companies like Samsung, Kia, Hyundai invested in market-creating innovations that made goods and services more affordable for more people, South Korea became prosperous.

As the country grew prosperous, it transitioned from an authoritarian and corrupt government to a more democratic government. Its investments, largely through taxes from market-creating innovations, have helped the country build better institutions capable of tackling system corruption.

In 2018, South Korea’s president was sentenced to 25 years in prison on corruption-related charges. This could never have happened decades ago when the country was poor.

This same story can unfold in Haiti, but the focus must be on creating prosperity first through local entrepreneurs pioneering market-creating innovations.

Deliberate investments in the country looking to solve challenges that the population on the ground are looking to solve — around food, water, education, healthcare, housing, and more — could make an immediate impact. And over time, that can lead to better institutions and a less corrupt government in Haiti.

Simply investing in Haiti’s current government is a mistake. But waiting to invest is as well.

What France should do is commit to investing in market-creating innovations in Haiti. These innovations can create the necessary systems that can ultimately transform Haiti’s economy and society and help Haiti recoup that which it is owed.

More broadly, on the relationship between representative democracies and incomes, CNN’s Fareed Zakaria writes in his book, The Future of Freedom, that, “In a democratic country that has a per capita income of under $1,500 (in today’s dollars), the regime on average had a life expectancy of just eight years. With between $1,500 and $3,000, it survived on average for about eighteen years. Above $6,000 it became highly resilient. The chance that a democratic regime would die in a country with an income above $6,000 was 1 in 500. Once rich, democracies become immortal.”

Essentially, what matters most for most citizens in any country, and especially in Africa, are well-paying jobs.

However, as important as reparations are for Haiti, they are not enough to revitalize the country’s ailing economy.

That’s because poverty almost always shows itself as a lack of resources: a lack of schools, hospitals, roads, food, water, sanitation, and so on. And so, to tackle poverty, rich countries typically send aid to poor countries. Yet, decades after providing aid to many poor countries, Haiti included, widespread poverty still persists.

Consider Afghanistan. For 20 years the United States and allies spent trillions of dollars in the country. Billions were spent on major infrastructure projects, schools, healthcare facilities and other development projects. However, shortly after the U.S. pulled out of the country in 2021, Afghanistan’s economy crumbled. Today, nearly 20 million people in the country are going hungry.

Providing resources is not enough to trigger widespread development.

What Afghanistan, as well as Haiti, lacks are strong economic, social, and political systems – not simply resources.

For instance, Haiti currently ranks 164 out of 180 on Transparency International’s Corruption Perception Index. So, whatever funds are paid to the Haitian government are most likely not going to reach the average Haitian. And pinning Haiti’s hopes of development on the election of a “good leader” is understandable, yet misleading.

When Nelson Mandela was elected as president of post-apartheid South Africa in 1994, he was, without question, one of the most universally admired leaders in the world. Integrity, morality, compassion, and humility are all words that have been used to describe the late president. But South Africa still remains mired in corruption. Jacob Zuma, one of Mandela’s successors, is undergoing trial on corruption, money-laundering, and racketeering charges. Good leadership is not enough.

For example, in the late 1990s fewer than five percent of people in Africa had access to mobile phones. It was deemed too expensive and complicated for a majority of people on the continent.  But in 1998, Mo Ibrahim built Celtel and developed a business that made inexpensive mobile phones and telecommunications accessible to millions of nonconsumers in several African countries.

In just six years, Celtel was able to build operations in 13 African countries and gained 5.2 million customers. By 2004, revenues had reached $614 million. In 2005 when Ibrahim decided to sell the company, he did so for a handsome $3.4 billion. But Celtel was just the tip of the iceberg.

In addition to supporting more than three million jobs, the sector now generates almost $15 billion in taxes annually and adds an estimated $130 billion of economic value to the continent. That’s the power of market-creating innovations.

From healthcare and education to housing and transportation, Haiti is full of nonconsumers. Similar to the African mobile telecommunications market, Haiti’s economy would benefit significantly from an influx of capital targeted at solving the challenges brought about by nonconsumption.

The New York Times report on Haiti is convincing. Crédit Industriel et Commercial, a French bank that received significant fees and interest from Haiti’s payment of reparations to France, plans to hire researchers to investigate its history and work in Haiti. Whatever it finds, there are no easy ways for France or Crédit Industriel et Commercial to fix its past sins. But rarely is throwing money at a problem as complex as development the viable solution. What France should do is commit to investing in market-creating innovations in Haiti. These innovations will create the necessary systems that can ultimately transform Haiti’s economy.