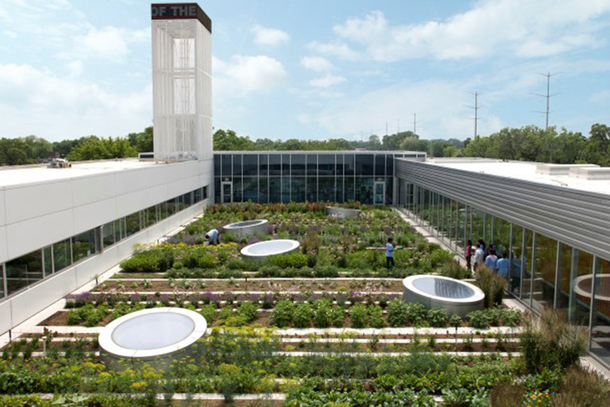 The scale and success of Africa’s response will depend on the effectiveness of today’s solutions for tomorrow’s changing cities.

The growth in Africa’s cities provides a significant headache for the region’s town planners who are responsible for ensuring that cities provide basic facilities and services for a booming urban population. Although Africa is still the least urbanized region in the world, rates of urbanization are the fastest on the continent which has seen its urban population double in a generation. Food demand in urban areas has spiked sharply creating new agricultural value chains at the margins of rural and urban areas. Urban agriculture has emerged as a response to the rapidly increasing urban population and demand for local staple foods and fresh vegetables.

This market trend is supported by rural migration as many farmers leave their villages to the city, while continuing to engage in farming in urban areas. Regulating this urban agriculture, which is predominantly based in the informal sector with little adherence to existing food quality and proper standards, is a challenge for governments. Hence, the food security of Africa’s growing cities relies on the success or failure of the emerging peri-urban market. Critical investment in basic resources and infrastructure remains essential alongside the need for targeted policy alignment between agriculture development and urban planning.

The proportion of people living in African cities climbed to 37% of the total African population in 2011. It is expected this will rise to nearly 50% by 2030. Rates of urban growth have averaged 3% a year. Such rapid urbanization has been marred by endemic poverty rates in many of Africa’s urban areas. Unlike in East Asia where an expansion in cities coincided with a drop in the number of urban poor, the opposite appears to be happening in Africa. Critically, the disconnect between urban development planning and national development frameworks means African cities have failed to respond to the surge in population with necessary public investment and much-needed infrastructure development.

In other regions of the world where urbanization was a step towards an acceleration of national development, sustained capital investment has been highlighted as a key factor in the promotion of upward household income and employment generation. Africa's urbanization challenge is particularly affected by increasing population growth without adequate levels of employment in addition to low physical and human capital development. The lack of administrative and planning capacity, especially at the local government level, has contributed to weak coverage in basic urban infrastructure.

Urban agriculture has become a major feature of Africa’s sprawling cities. As a grassroots response to booming urban food demand, the nascent sector is developing well within the context of the informal sector with little or no government assistance.

Reports by BBC show that Africa’s urban agriculture is typically underestimated in official reporting.  This has exacerbated the gap between agricultural and urban development policies. Dr Pay Drechsel, a researcher for the International Water Management Institute (IWMI), and also an expert on global urban agriculture, highlighted the lack of government’s response to this emerging trend. "This is not happening in large parts of the developing world because the urban sprawl is happening far too quickly. The legislative, administrative infrastructure is unable to keep pace."

African urban households are fully engaged in city farm production. According to the UN Food and Agriculture Organization, 40% of urban households work in the farming sector. Peri-urban agriculture is often located at the periphery of cities and major towns but can also operate on sparse pieces of land within built-up urban areas where small plots are cultivated around government buildings and commercials areas.

Considerable work is yet to be done to match the potential of urban agriculture with the nutrition crisis facing several African cities. Studies show that poor urban African children are just as likely to suffer from stunting, as children in deprived rural areas. Figures reveal that more than half of children living in Nairobi’s slums are severely malnourished.

Vegetable gardens are a popular form of urban farming in sub Saharan Africa. Farmers produce an important source of nutrition in the form of fresh local vegetables to be sold on a daily basis. Vegetable gardens are typically produced by migrants from rural areas in a multiple crop season. Farmers grow vegetables in the cities in dry seasons and return to the rural areas to plant staple crops when the wet season arrives.

The market for vegetables has been spurred by urban demand creating new opportunities for farmers who previously only depended on staple crops for survival. In Kumasi, Ghana, farmers earn additional income in the dry season by moving from cassava, plantain and maize to leafy vegetables.

New initiatives have been established to harness the potential of urban agriculture and its importance to food security and national development. A multidisciplinary network of German, African and international scientists have come together to support urban agriculture in major African cities. The Urban Food Plus network develops new techniques and methods in the area of improved agricultural production, food safety and value chains.

The World Vegetable Centre (AVRDC) has established a project in eastern and southern Africa which aims to improve income and nutrition by enhancing vegetable-based farming and food systems in peri-urban areas. The five-year project will focus on training young people to grow high-value vegetables in the surrounding areas of Dar es Salaam, Addis Ababa, Lilongwe, and Maputo.

In light of the growing significance of urbanization for African development, the African Union will focus on the issue at the next African Summit this year. Special attention will be placed on how to establish a regional approach to tackle the challenge of urban development while avoiding a natural resource crisis.

Sustainable management of land and water resource is key to the future of urban agriculture in Africa. Across the region, access to urban land for agriculture is a major challenge as I have discussed in previous articles. Agriculture production predominantly occurs on informally owned public land. However, in countries like Swaziland and Ethiopia, policy support to urban agriculture has seen the formal provision of land to city farmers for agricultural production. Insecure land tenure can discourage investment due to the threat of land repossession and crop destruction.

Governments can play a key role in improving land access for urban farms by addressing the need for formal land rights and securing green areas for agriculture with incentives for production such as access to extension and irrigation services as well as credit and input markets.

Nigeria has a vast urban agriculture markets with huge potential for expansion. Farmers in Ibadan take advantage of the demand for fresh vegetable produce by selling directly to consumers at the farm gate price, thereby creating a shorter value chain and enabling quicker returns for subsequent farm investments. Prime arable land is available across Lagos with opportunities to connect to farmers to major city markets through existing transport links.

A 2010 inventory revealed that 675 ha of arable land could be used for market gardens alongside 3300 ha of railway and power line infrastructure available for market distribution. Insecure land markets fuelled by speculation and the prevalence of illegal settlements means that land potentially available for urban agriculture is often underutilised. This is made worse by poor waste management leading to prime agricultural sites being used for garbage dumping.

Rapid urbanization in Africa poses as many challenges as there are opportunities for national development. The expansion in urban food markets fuelled by sharp increases in urban populations has been to the benefit of millions of farmers across the region who are able to supplement their income with additional sales particularly in the vegetable trade. Maximising the potential of the sector for enhanced food security will require governments to do more to move urban agriculture firmly out of the informal sector and situated at the heart of agriculture and urban development strategies.

A forward looking and ambitious approach is needed to stand up to the challenge of urbanization and the scale of food demand for a booming population. The scale and success of Africa’s response will depend on the effectiveness of today’s solutions for tomorrow’s changing cities. Building on progress already achieved will rely on learning from best practices from within the global South and across the region where governments have maximised the potential of urban agriculture by scaling up production, improving food standards and regulations and building the infrastructure necessary to promote the development of new agricultural market within and around emerging cities.

Author: Joan Nimarkoh, Financial Nigeria guest writer, works as a Policy Consultant for the UN FAO. She is a graduate of International Development Studies (MSc) from the school of Oriental and African Studies, University of London, while specialising in African Studies.