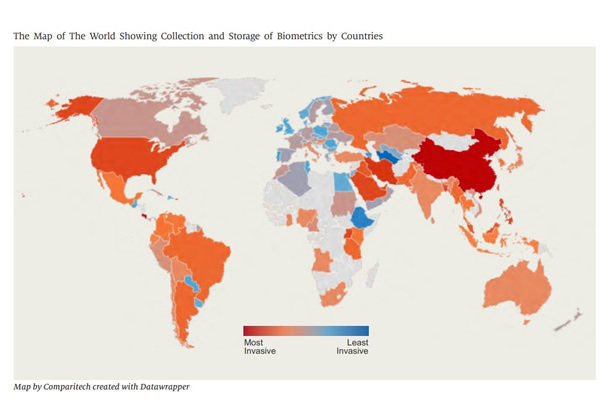 A new study by Comparitech shows there are extensive and invasive biometric data collection practices and use in Nigeria.

Biometric technologies have been on the rise for years now. Research and Markets – a United States-based market research company – forecast that the global biometrics market would grow from $17.28 billion in 2018 to $76.64 billion by 2027. For consumers, such technologies bring more convenience in the authentication process and enhance security. Governments – who are also fuelling the growth of the market – see biometrics as a tool to protect citizens owing to threats of terrorism.

With biometrics, every individual can be accurately identified by their unique physical or behavioural traits. The technology enables identification of people who are under surveillance. Notwithstanding the convenience, security, and other benefits of biometrics; there are growing fears about theft and mishandling of personal information. Human rights concerns have also been raised where governments use biometric data for profiling and mass surveillance.

According to the study sent to Financial Nigeria last month by Comparitech, Nigeria was given a score of 11 points out of a maximum of 31. Points are assigned to countries based on the severity of biometric use, collection and access. A high score indicates better regulations for protecting biometric use and restrictions regarding surveillance. Low scores indicate more intrusion and extensive use of surveillance.

The United Kingdom-based research firm derived the points for each country by tabulating the scores accrued from eight survey categories. The categories – based on key areas that apply to most countries – are storage, police access, CCTV, workplace, visa entry to country, biometrics in visa, biometric check upon arrival in a country, and COVID-19 biometric developments.

The report found that many countries collect travelers’ biometric data often through visas or biometric checks at airports. The vast majority of the 96 countries that were studied use biometrics for bank accounts. Facial recognition CCTV is being tested and implemented in a large number of countries.

China tops the ranking of countries with the worst biometric data collection practices and use, scoring only 2 points out of 31. The world's most populous country is known for its widespread and invasive use of facial recognition technology in CCTV cameras. According to Paul Bischoff, a tech writer at Comparitech, China’s nationwide biometric database is being expanded to include DNA. During the lockdowns put in place to contain the spread of COVID-19 pandemic, China was reportedly using drones with facial recognition to monitor people outside their homes.

The next lowest ranked countries with the worst biometric data collection and use, apart from China, are Costa Rica (3 points), followed by Iran (5 points). United States, Saudi Arabia, United Arab Emirates, Bangladesh, the Philippines and Uganda scored 6 points each. Iraq and Malaysia were ranked 5th with 7 points apiece. These are countries that show concerning disregard for the privacy of people’s biometric data.

The report found that countries with best practices in biometric data collection and use are in the European Union. EU countries scored better due to the General Data Protection Regulation (GDPR), a digital protection and privacy legislation, which came into effect in 2018. Among other provisions, the law protects, to a large extent, the use of biometrics in the workplace.

The Comparitech study was released amid outcries from Nigerian citizens and civil society organisations over the new rules for subscriber identification module (SIM) registration in the country. For years, Nigeria has lacked a centralised biometric databank despite the existence of multiple biometric databases such as Bank Verification Numbers (BVNs), voter registration database, international passports data, biometric data of mobile phone users, among others.

The National Identity Management Commission (NIMC) has embarked on a policy that requires all mobile phone subscribers to link their SIM cards with their National Identification Numbers (NINs). Telecommunication companies have now been directed to disconnect the lines of subscribers who fail to obtain NINs and link them with their SIMs. The NIMC has threatened to withdraw the licences of the operators that fail to disconnect lines that are not synchronised with NINs.

This move by the operator and regulator of national identity matters has been described as illegal by Financial Nigeria columnist and legal professional, Funmilayo Odude. In her article published in this edition of our magazine, she strongly censures the directive, stating that it has no bearing on the regulatory obligations of the telcos.

This action by the government means it is adding illegality to its poor biometric data collection practices. Even if for national security reasons, this puts the country in a worse light.