Factoring can be a game changer for Nigerian SMEs and trade 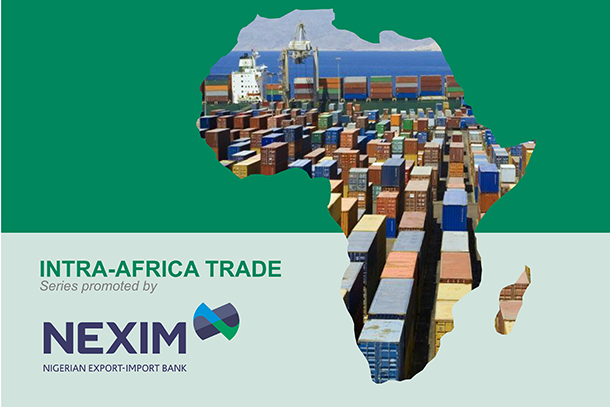 The Nigerian Factoring Bill is expected to be passed by the 9th National Assembly to provide the legal and operational framework for birthing commercial factoring in Nigeria.

In 2018, trade accounted for 59.4 per cent of global gross domestic product (GDP), according to the World Bank. This underscores the saliency of trade to the world’s economic output. The importance of trade to the global economic outlook has recently been observed, as global equity indexes rise with the sheerest prospect of major trade agreements.

The reasons Nigeria’s trade, as a percentage of total national output, is below the regional average and well below those of most emerging- and frontier-market countries include structural and policy constraints. For instance, crude oil has for decades accounted for over 90 per cent of Nigeria’s exports. And since August 2019, the country’s land borders have been closed. While the inflationary backlash of the border closure has been noted, the wider implications for Nigerian trade are muted.

The persistently low and worsening credit penetration among Nigerian Small and Medium Scale Enterprises (SMEs) is also a major constraint to Nigerian trade. When the SMEs are unable to raise both the level and quality of their production majorly because of lack of financing, it has a negative impact on trade.

SMEs accounted for 48 per cent of the GDP in 2018 and about 90 per cent of total employment. These statistics compare favourably with what is obtainable in any country. They, however, mask a reality. With Nigeria’s GDP per capita at $2,028 (in 2018), which is one of the lowest in the world, the productivity of the SMEs is quite tepid. This ensured that the businesses accounted for only 7 per cent of the country’s exports value. However, SMEs contribute as much as 30 per cent of exports in some comparator countries in the Association of Southeast Asian Nations (ASEAN) region.

According to data by the Central Bank of Nigeria (CBN), between 2000 and 2005, bank loans to SMEs as a percentage of the total bank lending to the private sector was 6.02 per cent. At the middle of that decade, the CBN had mandated banks in Nigeria to individually raise their share capital base by as much as 800 per cent. While bank lending to the private sector has exponentially increased since the banking industry consolidation and recapitalisation programme, the percentage of the total credit to SMEs has been falling. From 2006 – 2011, bank credit to SMEs plummeted to 0.41 per cent. The figure had fallen further to 0.1 per cent in Q1 2017.

Nigeria has had various policy and institutional frameworks to spur growth in the SME sector through financing. In 1999, the Bankers Committee (the club of CBN’s leadership and Bank CEOs) decided to set up the Small and Medium Industries Equity Investment Scheme (SMIEIS), where banks will contribute 10 per cent of their profit before tax to fund equity investments in SMEs. This policy was resurrected in 2017, as the CBN approved the Agri-Business/Small and Medium Enterprises Investment Scheme (AGSMEIS), where banks are to remit 5 per cent of their profit after tax for approved investments.

The government has also set up a number of development finance banks and non-bank development finance agencies with the aim of boosting the SMEs. The most recent policy effort, the directive of the CBN that banks should increase their loan-to-deposit ratio (LDR) to 65 per cent, also aims at increasing lending to the SME sector.

Many of these and similar initiatives are now defunct. The impacts of the existing ones remain to be seen. But these are no reasons to stop trying to improve the financing of SMEs to boost their productivity and contribution to trade. Many developing countries are grappling with the same challenge.

Despite the efforts of the government and CBN, Nigeria still lacks a critical trade finance tool in its toolkit, which is “factoring.” Factoring is a structured trade finance instrument. It entails the purchase of receivables – especially invoices from suppliers – at a discount. This should be distinguished from LPO financing, which provides funding for the execution of a purchase order. Factoring is provided for the invoices for purchase orders that have been delivered but are yet to be paid.

Factoring ensures producers, service providers or traders – usually SMEs – have quick access to financial value after they have made supplies and issued their invoices. Although a small percentage of the invoice value is retained by the financing agent – technically called the “factor” – as discount on the invoice amount paid, the SME can significantly increase its profit by increasing its turnover, utilising the benefit of quicker access to funds.

It is important to point out that the factor would initially pay an agreed percentage of the invoice value. The balance, less the payment discount, is paid when the customer has paid the full invoice value. It should also be noted that factoring is applicable to both domestic and international trade.

Whereas bank financing has for a long time dominated global trade finance, factoring is one of the fastest-growing instruments for structured trade finance in the world. The global factoring market was valued at €2.59 trillion in 2017, according to data by Factors Chain International (FCI) – a global association of institutions offering factoring services, setting industry standards and engaged in training and capacity-building.

According to Kanayo Awani, Managing Director for Intra-African Trade Initiative, African Export-Import Bank (Afreximbank), Africa’s factoring volumes grew from €14.9 billion in 2009 to approximately €22.3 billion in 2017. In 2018, Africa’s factoring volumes grew further by 2 per cent; but the continent accounted for only a meagre 0.8 per cent of the global value, which grew to €2.76 trillion, according to FCI. Europe dominated with 66.1 per cent share; and Asia-Pacific, 24.1 per cent.

Only a handful of countries are contributing to Africa’s factoring volumes. These are mainly South Africa, Tunisia, Morocco, Egypt, Mauritius and Kenya. Nigeria, Africa’s largest economy, is conspicuously missing.

In response, the Nigerian Export-Import Bank (NEXIM Bank) has been working with stakeholders in the public and private sectors under the auspices of CBN’s Financial System Strategy (FSS) 2020 to develop factoring in Nigeria. With the technical support of Afreximbank and FCI, the efforts have yielded the Nigerian Factoring Bill.

According to NEXIM Bank, the bill went through First and Second Reading, and public hearing of stakeholders were held before the 8th National Assembly disbanded last May. The bill is expected to be passed by the 9th National Assembly to provide the legal and operational framework for birthing commercial factoring in Nigeria. 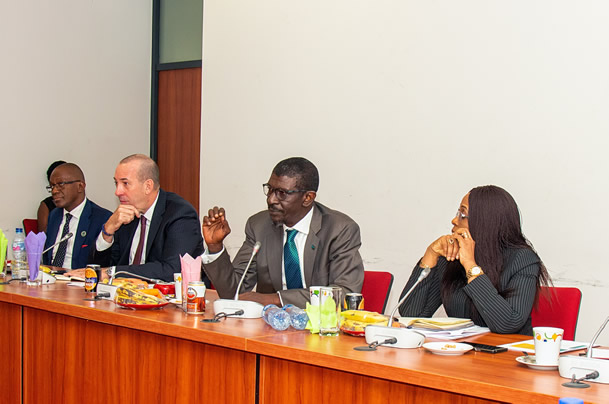 Nigeria has the advantage of currently formulating its legal and operational framework for factoring. The country can, therefore, harness existing market knowledge for factoring. In Europe, the growth of factoring is being powered by technology. In the age of disruption by financial technology (fintech) firms, many factoring platforms have emerged to offer low-cost solutions, quick processing time, and wide reach. Some of the platforms have employed blockchain technology’s open ledger model to foster transparency.

Some of the European platforms offering factoring include Finexkap and Debitos – which is considered to be the first real-time factoring platform in Europe. It should be noted as well, that factoring has benefitted from credit reporting provided by credit bureaus, including Schufa, Experian and Equifax. It is, therefore, important to consider the use of credit reporting in factoring in Nigeria to manage credit risks.

China’s factoring market grew exponentially in the 18-month period to June 2019. The number of commercial factoring firms increased from 4,222 to 12,081 in that period. Also, sector-wide registered fund increased from ¥111.7 billion to ¥848.7 billion. However, recent losses within China’s domestic factoring market amounted to over $15 billion in two years. This was traced, in large part, to the lack of information transparency in the relationship between commercial factoring companies and Person-to-Person (P2P) lenders.

As a result, the China Banking and Insurance Regulatory Commission (CBIRC), published a notice of a ban on commercial factoring companies engaging in the following business activities: accepting public deposits; use of P2P lenders, local exchanges of various types, asset management organisations and privately offered investment funds for funding purposes; borrowing funds from other commercial factoring companies; making loans or being entrusted with making loans; engaging in or undertaking for other parties loan collection operations unrelated to commercial factoring; undertaking factoring based on transaction contracts that are illegal or accounts receivable for which ownership is unclear; and accounts receivable for a single debtor exceeding 50 per cent of total risk funds, and total risk funds exceeding net assets by tenfold.

As with China, a lot of attention should be placed on the domestic risk to factoring in Nigeria. Most external markets for Nigeria’s trade have more developed and transparent market frameworks for mitigating the risk of trade finance, including factoring. 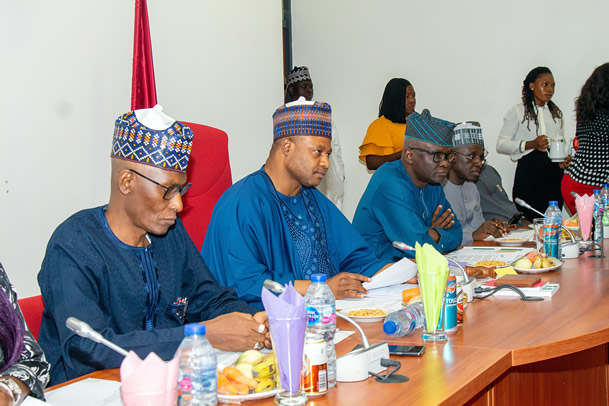 Chairman, Senate Committee on Banking, Insurance and Other Financial Institutions, Senator Uba Sani
(second from left); and a cross-section of committee members at the meeting

Nigeria has been a late comer in adopting some very important policy and market frameworks. The country belatedly created its sovereign wealth fund in 2012, decades after many other oil-exporting countries created theirs. Similarly, the country is behind time in adopting factoring, which has aided many countries to grow their domestic and international trade – thereby boosting the productivity of their SME sector.

It is now the responsibility of the 9th National Assembly to pass the Nigerian Factoring Bill as quickly as possible. Improving the financing of Nigerian SMEs is essential for the country to be able to benefit from the African Continental Free Trade Area (AfCFTA), which goes into operation later this year on July 1.

Previous articles under the series:
Can Nigeria benefit from African free trade?
How to make your own luck in emerging markets