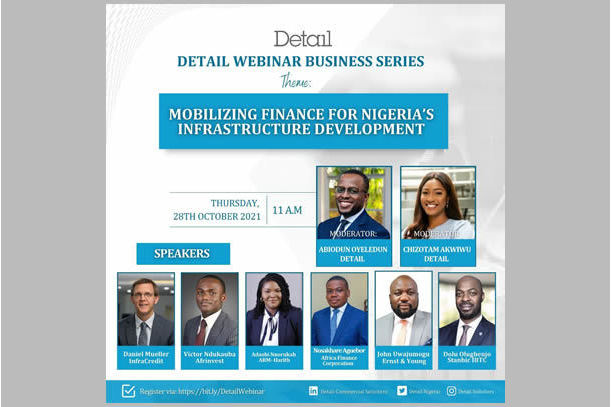 With the increasing number of participants in the infrastructure funding space, the market could become more collaborative than one driven by competition.

Finance and infrastructure investment experts as well as legal practitioners connected at the DETAIL Webinar last week to discuss “Finance Mobilization for the Development of Nigeria’s Infrastructure”. The event, which held on Thursday, October 28th, 2021, was organized by Detail Commercial Solicitors (DETAIL), one of the top law firms in Nigeria and the first law firm to specialize exclusively in non-courtroom practice.

Setting the tone for the deliberation, Chizotam Akwiwu, an Associate in the Finance & Capital Market Team, at DETAIL, gave an overview of the legal and regulatory framework for infrastructure financing in Nigeria. She stated that the progress of any national economy is dependent on its level of infrastructure. She noted that infrastructure has an impact on transportation, energy supply, export, as well as domestic production and supply of goods and services. It also contributes significantly to the well-being of the population, the productivity of the workforce, and access to education and healthcare services.

John Uwajumogu, Partner, Strategy and Transactions at Ernst & Young West Africa spoke on Nigeria’s infrastructure dilemma – how the infrastructure deficit has led to reduction in private sector participation and consequently productivity, as well as the resultant impact on the flow of investment into the country. He suggested that the solutions to these issues may not be far-fetched. They lie in directing infrastructure investment into strategic and priority sectors that are crucial for sustained growth and the transformation of the economy. Doing this in the short-term would help drive long-term sustainable infrastructure development.

When asked why there is still a problem of financing infrastructure in Nigeria, Ndukauba noted that there exists a host of factors amongst which are access to finance, devaluation of the naira, and political governance of the country. He said the country needs to leverage private sector finance as continuous public borrowing to tackle the existing infrastructure deficit is not sustainable.

On the subject of the newly formed Infrastructure Corporation of Nigeria Limited (InfraCorp) as a solution to the funding problem in the infrastructure sector, he stated that the key is mobilizing local capital to unlock infrastructure investments. With the availability of the requisite knowledge of the market locally, foreign investors are also looking to back project sponsors/promoters who are local. The investment banking chief further stated that the plan should be to match liabilities with long-term assets and channel them into areas that will create competitive advantage or at least enable the competitive advantage that make Nigeria a more profitable market.

In his closing remarks, Ndukauba emphasized collaboration rather than competition among players in the infrastructure sector, policy consistency on the part of the government to boost investor confidence, more deliberate efforts on the part of project sponsors and promoters in thinking beyond the government as both the source of licences and concessions as well as finance and become more creative, and working with quality advisors to put together better structured project with lots of thoughts given to risk mitigation, timelines, structuring, as well as exit.

Mueller of InfraCredit spoke on the risks for private sector financing and how to derisk. In his experience, according to him, a major challenge in the market is over-dependence on government as evidenced by weak private sector participation in building, owning, and operating long-term assets. Most of the infrastructures are done by the government. He, therefore, recommends empowerment of the private sector to do more through long-term licences (20–30-year licenses) that may only be revoked in cases of irredeemable under-performance, and better interaction with the government to generally create an enabling environment for private investments in infrastructure.

As his final thoughts, Mueller said that Nigeria has a more developed capital market, private pension industry, demand, and resources than many other developing countries. Therefore, stakeholders need to believe in the potential of the country, get the projects structured, engage the government, and continue to demonstrate how new infrastructure projects backed by the private sector is a good way forward: it will create more jobs and pull people from the informal to the formal economy.

Olugbenjo spoke on the risks that pose the most threat to private investors and dissuade them from investing. In his opinion, political risk stands out; the other is non-sustainability of government’s policies (no guarantee that the public sector part of the bargain will be fulfilled, which throws the economics of projects into doubt).

He recommends proper communication by the government, giving assurances as much as is feasible. The CIO at Stanbic IBTC also advises that market forces should be allowed to prevail. He said that to properly tap into the large informal sector, e.g., for national savings, there is a need for collaboration between practitioners, government, trade groups, etc.

Nnorukah shared some important lessons learnt in her experience with private sector infrastructure financing, one of which is that having sponsors who are sophisticated enough to know what it will take to bring the project to a close is very key. She said project finance tries to insulate the project from the market in a bid to ensure guaranteed revenue and end to end contract, but we must be ready to deal with the fundamental issues of the market itself, else those guarantees would come under pressure. She suggests that innovation should be embraced and since there are increasingly more participants in the infrastructure funding space, the market could become more collaborative than one that is driven by competition.

She identified other market imperatives, including the need to prioritize government needs, regulatory consistency, and capital efficiency -- raising more local financing due to the existing foreign exchange rate volatility.

Aguebor addressed the key risks and challenges to private sector financing. The challenges include inadequate system of incentivizing private sector involvement in infrastructure funding, concern about repayment, and lingering political dysfunctions. He also noted that there is a divergence between the guiding rules, laws and the market practices. A capricious application of the rules in any sector or jurisdiction makes it high risk and more expensive, thus affecting project viability more often than not.

Because of these risks, he stressed the need for incentives and concessions to encourage private funding and for government and policymakers to create an overall conducive environment for private sector infrastructure financing.