What Somalia’s impending famine teaches us about addressing donor fatigue 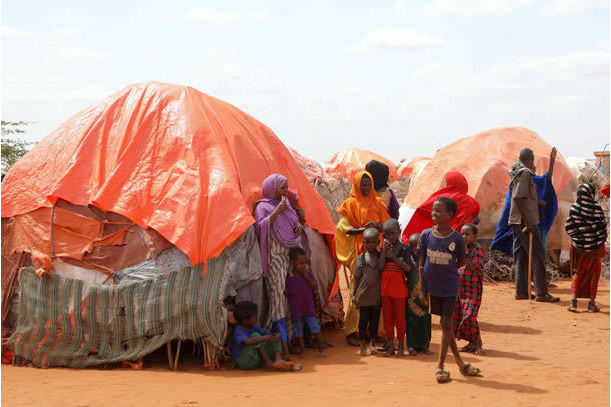 0 Comments
Civilians gather outside their makeshift shelters at the Kaxareey camp for the internally displaced people in Dollow, Gedo region of Somalia May 24, 2022. REUTERS/Feisal Omar

Another famine is happening in Somalia. Exacerbated by drought, displacement, and the Russia-Ukraine war, millions of people are starving, but much of the world is focused elsewhere – Ukraine.

While the U.S Congress approved $7.5 billion in economic aid for Ukraine in June and an additional $3 billion in new military aid late August, international assistance for Somalia has raised just 67 percent of the United Nations’ $1.5 billion appeal to help the country and its East African neighbours.

This is partially due to donor fatigue, a dangerous phenomenon in development.

Donor fatigue happens when funders don’t see the expected progress for the resources they’re providing to solve a particular problem in a region over a period of time. When this occurs, donors get “tired” and disillusioned, often believing the case is hopeless.

One of the main problems with donor fatigue is that giving up on solving the problem perpetuates the suffering donors set out to alleviate. In Somalia, for instance, as donor fatigue persists, millions of people go hungry and continue to suffer. So, in order to help Somalia and its people, donors should figure out a way to address the fatigue that often plagues them.

Analysing Somalia’s past struggles and potential solutions is a great place to start.

Somalia’s development trajectory since the 1970s has been fraught with difficulties. Political instability, clan wars, drought, famine, and displacement have all factored in the nation’s story.

Somalia’s famines are typically intensified by international policies designed to fight terrorism. For instance, counter terrorism laws slow down humanitarian action by increasing operating costs, slowing down administrative functions and operational responses, curtailing funding and undermining humanitarian partnerships. Tensions between counter-terrorism and humanitarian action policies also make it difficult to aid Somalia for fear that the aid would be misappropriated.

In 2009, for example, fears that Islamist insurgent Al-Shabaab was benefiting from the influx of food aid led the U.S Office of Foreign Assets Control to suspend over $50 million in humanitarian aid.

Today, the Russia-Ukraine war is another significant geo-political reality impacting Somalia’s food crisis by driving up food prices as both Russia and Ukraine provided nearly all of Somalia’s wheat.

The billions of dollars Somalia has received tend to not be spent as effectively as they can because of political complexities, such as the anti-terrorist policies and the war in Ukraine, which only serve to reinforce donor fatigue.

In dissecting Somalia’s complex struggles, it becomes clear that there is no silver-bullet solution. To avoid donor fatigue, Somalia needs both emergency assistance to address immediate crises, and investments that create long term solutions.

In a World Bank assessment of Somalia’s poverty and vulnerability, remittances are listed as the major source of external development finance for Somalia. As a result, one of the recommendations of the assessment is to create policies that will further facilitate remittance flows to the country. Remittances can help alleviate poverty and help in immediate crisis situations. However, to address long-term growth, Somalia will need a different strategy.

As I explored in my recent blog, development should focus on creating markets that will pull in the resources needed to create sustainable economic growth. Market-creating innovations create markets that serve people for whom existing products or services were unattainable. In doing so, these new markets pull in necessary jobs and infrastructure, thus creating sustainable economic growth across multiple sectors.

Consider how Somali citizens are solving education accessibility problems in the country. The Somali Pulse, an innovative economic survey system, provides testimonials of everyday Somali citizens expressing their frustrations with living in poverty, but also sharing what hope and optimism they have for their country and their future. In one of these testimonials, a woman shares that her community has started local groups for schooling because it is too expensive and too far to send their children to school. The money that is saved is then invested in women who want to start a business. These women want their local initiatives to be supported by the government and aid agencies.

There is innovation in Somalia, and if funders direct part of their aid to help innovators such as these to create markets, their capital goes much farther than simply managing poverty. It creates prosperity and thus combats donor fatigue.

There is another food crisis in Somalia. In past famines, there were early warnings, but donors were slow and reluctant to act. Furthermore, the aid that was received did not create long term solutions. Let’s not make the same mistake again.