Remembering the EndSARS protest in Nigeria 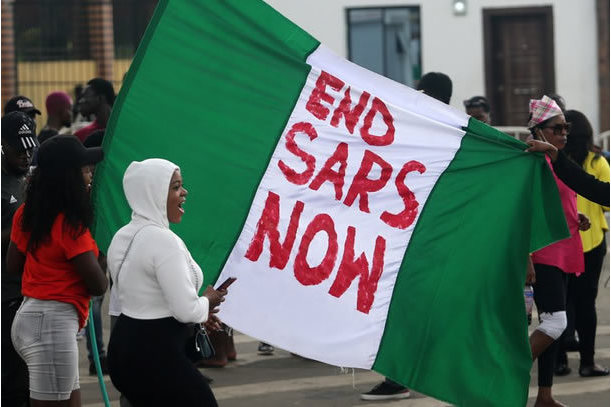 Reminiscing on the EndSARS protest brings to mind so many questions left unanswered.

Two years after the EndSARS protest shook Nigeria, 20 October 2020 has become a day never to be forgotten in the history of the country. But although what the protesters asked for was an end to police brutality, some of them were killed and others remain detained till date. The Special Anti-Robbery Squad (SARS) was a branch of the Nigeria Police Force (NPF) under the State Criminal Investigation and Intelligence Department (SCIID), founded in late 1992. It was charged with the responsibility of detaining, investigating, and prosecuting people involved in crimes including armed robbery, kidnapping, and murder.

Unfortunately, in the course of discharging these duties, many SARS operatives were indulging in unprofessional conducts, such as extorting money from Nigerians, detaining and killing innocent citizens, assaulting women sexually, humiliating and unlawfully arrests, and brutalising civilians, with its victims being mostly youth.

The following cases within few months to the EndSARS protest highlight the countless unprofessional conducts of the NPF and its SARS unit. On 4 May 2020, a final-year student of Nnamdi Azikiwe University, who was in his late twenties, was shot dead in a beer parlour by police officers. While the uproar this extrajudicial killing generated was yet to quieten, on 21 May 2020, a boy who was the only son of his parents was knocked down by a moving vehicle as he was being chased by cops from the Nimo unit of the police in Njikoka Local Government Area of Anambra State at around 8:00pm, leading to his untimely death. Five days later, 17-year-old Tina Ezekwe met her death as she was hit by a stray bullet from a reportedly drunk officer. And on 2 June 2020, a police officer reportedly killed a 20-year-old motorcyclist in Adamawa just because he refused to pay a bribe of N100.

On 9 July 2020, a 27-year-old man in Imo State met a brutal end at the hands of a policeman because he wasn't wearing a face mask. And 3 October 2020, a video of SARS officials killing a man and making away with his car in Ughelli, Delta State, went viral.

These atrocious and unlawful killings, coupled with other human rights abuses, sparked a revolt by the youth. The said revolt, according to some commentators, was dubbed the Arab Spring in Nigeria. Nigerian youth couldn't take it anymore. What started as a social media campaign in 2017 with the hashtag #EndSARS, metamorphosed into a nationwide protest beginning on 3 October 2020, when young Nigerians took to the streets to protest against police brutality, and calling for SARS disbandment.

Contrary to the government's expectation that the protest would end as soon as it had begun, the decentralized, youth-led protest grew bigger by the day, spreading like wildfire across Nigeria and eliciting sympathy and support from international communities and Nigerians in diaspora.

On 9 October 2020, ‘#EndSARS’ became the trendiest tweet on Twitter with over two million tweets, including those from countries like the United States and the United Kingdom. Nigerians abroad and sympathisers also organised protests and demonstrations in many major cities around the world.

Concerned that things would get worse as the protest kept increasing its momentum, the then-Inspector General of Police, Mohammed Adamu, announced the abrogation of SARS on 11 October 2020. But the protesters thought that this was nothing more than a lip service since such pronouncements have become a recurring decimal in previous years. Thus, the protest continued unabated.

Although the protesters had no leader, or because of it, they had a common goal that triumphed over tribal sentiments. The major drive behind the protest was standing up against police brutality in a post-colonial Nigerian state that has entrenched predatory characteristics as epitomised by the army and police who prey on innocent citizens that they were meant to protect. The antithesis of the Nigerian state contributed to the success of the protest before it was quelled.

The EndSARS protesters had five demands. They demanded the release of all those arrested during the protest; justice and compensation for all who died through police brutality; psychological evaluation and retraining of SARS operatives before they are deployed to any other police unit; an independent body to be set up within 10 days to investigate and prosecute all reports of police misconduct; and an increase in the salaries of the officers of the Nigerian police.

The protesters threatened to continue their protest until their demands were met. Although the protest was largely peaceful, hoodlums later exploited it to loot and destroy private and government-owned properties.

During what became the peak of the protest, tragedy struck on 20 October 2020. Between 6:45pm and 9:00pm on this date, officers of the Nigerian military and police reportedly repressed a peaceful protest violently at Lekki Toll Gate, Lagos, where the protesters had converged, shooting and killing some of the unarmed youth. According to Amnesty International, at least 56 people were killed by the excessive use of force by the army and police. A LinkedIn user, identified by the username "Ikie," described that night as a near-death experience. After the Lekki Toll Gate shooting, the protesters retreated, and this gradually brought the protest to an end.

Initially, the authorities denied that the killing at Lekki happened but later disclosed in a closed meeting with newsmen that the army was deployed to the venue at the request of the Lagos State Governor, Babajide Sanwo-Olu.

The truth is that SARS was dissolved and replaced with the SWAT (Special Weapons and Tactics) teams. But with the change essentially a matter of nomenclature, the atrocities committed by SARS are still being repeated today, but at a lesser level. The same officers from the disbanded SARS unit were retained in the renamed SWAT teams. Thus, this brings to mind the aphorism of the "old wine in a new bottle."

Judicial panels of inquiry were set up to receive petitions on police brutality across the country. Commonly referred to as EndSARS Panels, the panels were chaired by retired high court judges and had members from civil society groups, the NPF, National Human Rights Commission (NHRC), and youth groups.

About 29 out of the 36 states of the federation set up panels of inquiry, majority of which concluded hearings but didn't make their findings known to the public. Thus, apart from the ‘dissolution’ of SARS, it is unclear to the public if other demands of the EndSARS protesters are being attended to.

However, while the five-point demand was not completely met, the EndSARS protest resulted in a positive change, in the sense that the Nigerian government realised it could not ignore Nigerian youth who constitute a larger part of the population. More importantly, the youth have discovered how much they can achieve, and how powerful they can be, as a social force for change, when united.

Through the EndSARS protest, Nigerian youth were able to express their dissatisfaction with the outrageous human rights violations by SARS and the socio-economic challenges they face as a demographic group. Likewise, the hoodlums that hijacked the protest were able to reveal how cruel Nigerian leaders could by stockpiling in warehouses the palliatives that were meant to be distributed to poor and vulnerable citizens during the sit-at-home public policy against the spread of COVID-19. The citizens were without effective safety nets during the lockdown stage of the pandemic.

EndSARS protest taught us that government should address youth grievances, which include a de facto youth exclusion from electoral positions, youth unemployment which is higher than the national unemployment rate, social inequality, and the paucity of social amenities. Youth participation in decision-making processes should be inclusive.

The protest indicates that the government should develop appropriate measures against cybercrimes, which can undermine national security. This is to replace the draconian approaches to fighting cyber-fraud as SARS did, essentially infringing on the rights of citizens.

The problem of rising unemployment – in particular youth unemployment – is a major impetus for crime and social unrest in Nigeria and needs to be adequately addressed. Also, government should strive to protect and preserve the pillars of democracy, such as press freedom, independence of the judiciary, the rule of law, and fundamental human rights, among others.

An Igbo saying, when translated into English, goes: "If you neglect a small pot, it will quench the fire." It may be a cliché, but the youth are the leaders of tomorrow. Neglecting their role in national development will breed social unrest. If their grievances are ignored, it can lead to a popular revolt as a last resort to the failure of the state.

Promise Jude Emordi, a lecturer with the Delta State Polytechnic, Ogwashi-Uku, Nigeria, is also a volunteer peer reviewer and peer review mentor with Publons Academy and Web of Science Academy, both situated in New Zealand. Esther C. Ezeji is a virtual assistant and the founder of CzDigital, a tech academy dedicated to empowering women in Nigeria.