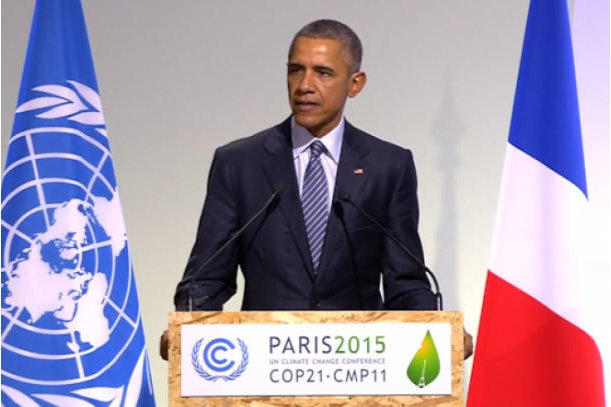 ...says the Paris Climate Agreement is not a fair, just or science-based deal.

Negotiators at the Conference of Parties in Le Bourget are nearing a climate agreement. In response, Friends of the Earth U.S. President Erich Pica issued the following statement:

The Paris Climate Agreement is not a fair, just or science-based deal. President Obama challenged the international community to act aggressively to combat climate chaos. Instead of following his own words, the administration has systematically attempted to undermine some of the basic structures of the Framework Convention, abandoning the countries and communities most vulnerable to the effects of climate disruption.

The United States has hindered ambition. The result is in an agreement that could see low-lying islands and coastlines swallowed up by the sea, and many African lands ravaged by drought.

Using the world’s atmosphere and the suffering of the vulnerable as a guide, the United States is failing -- by a long shot -- to do what climate science and justice demand. This holds true for the United States' greenhouse gas reduction pledge, its provision of funds for developing countries to take climate action and its obstruction of progress on loss and damage.

The Paris COP has been an invaluable moment. Our political leaders are failing us, but that failure is catalyzing the need for people power and building upon the incredible work of front line movements all over the world. Friends of the Earth's international network helped mobilize tens of thousands of people in the streets of Paris to demand meaningful and just climate action. Building off our Keystone XL victory, with Indigenous Peoples and local communities at the helm, Friends of the Earth U.S. returns to the United States doubly committed to realizing a fossil-free world that is humane and equitable.