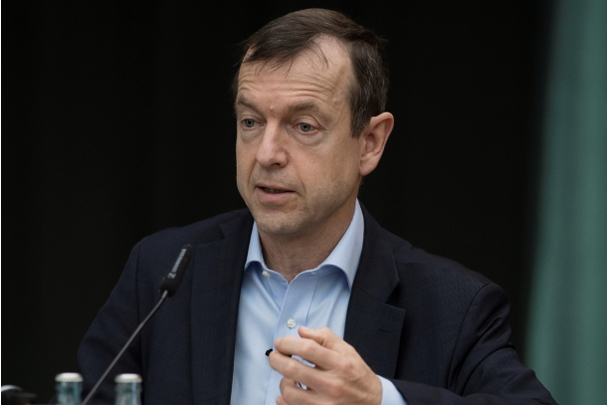 Project Syndicate’s Says More talks with Daniel Gros, Board Member and a distinguished fellow at the Centre for European Policy Studies.

Project Syndicate (PS): In your latest PS commentary, you observe that central bankers on both sides of the Atlantic are under pressure to “pivot back to traditional inflation-fighting mode,” though the US Federal Reserve is moving more quickly than the European Central Bank. As you noted in October, the United States probably has more to worry about on the inflation front. But last July, you warned that the transatlantic divergence on monetary policy could eventually strengthen the dollar and generate new trade tensions. How close are we to that point? Should the ECB pick up the pace of policy normalisation?

Daniel Gros (DG): The latest data suggest that we are approaching the situation I envisioned. The US trade deficit is now running at around $80 billion per month – higher than at the peak of the housing boom of the early 2000s. Because the US is virtually at full employment, this situation has been largely ignored. But should the US labour market weaken, President Joe Biden’s administration might wake up to the need to defend well-paid jobs from foreign competition. This could lead to the trade tensions I predicted.

PS: You have underscored a link between hydrocarbon prices and Russia’s foreign policy, pointing out that higher oil and gas prices have often coincided with Soviet/Russian military interventions abroad, from Afghanistan in 1979-80 to Georgia in 2008. In 2014, Ukraine might have been spared even more aggression by an oil-price crash, which weakened Russia’s economy at a crucial moment. Today, gas prices are again surging – and so is Russian aggression. Are we seeing the same dynamics at work? What does this mean for the EU?

DG: Unfortunately, the answer to your first question seems to be yes. Complaints about NATO’s expansion are nothing new. But it is only recently that Russia has been massing troops near Ukraine’s border. The shift can probably be explained largely by the fact that the combination of high gas prices and years of conservative macroeconomic policies mean that Russia’s economy is now effectively “sanction-proof.” Putin, it seems, feels that Russia’s position is strong enough to risk a war.

The EU and the US must recognize that, under these circumstances, economic sanctions are unlikely to provide a sufficient deterrent. Moreover, Europe needs to do more to strengthen its defence capabilities and to reduce its dependence on Russian gas.

PS: In November 2020, you challenged the conventional wisdom that China “owes its progress in some high-tech sectors to the state’s guiding hand.” In your view, China’s fundamentals, especially its high savings rate, mean that “the government’s plans for the coming years would probably materialize…even without state intervention.” But in view of the Chinese authorities’ recent – and ongoing – regulatory crackdown, could state intervention impede progress?

DG: The country is not yet at the point where a regulatory crackdown will significantly impede overall progress. Innovation in the sectors where the government is pursuing the most heavy-handed interventions – such as social-media companies – might suffer. But innovation activity is still strong – and supported by the state – in industries based on “hard science.” In fact, such high-tech sectors – for example, the semi-conductor industry – might benefit from an outflow of entrepreneurial talent from the consumer sector.

PS: You also urged the next US administration to accept China’s rise, rather than continue to try to resist it. That has not happened: despite a slight change in tactics, Biden’s approach to China looks a lot like his predecessor’s. What changes would you like to see in the Biden administration’s China policy in 2022? Likewise, how do you rate Europe’s stance on China, which may be viewed as more moderate, despite the stalled ratification of the (already severely limited) EU-China Comprehensive Agreement on Investment?

DG: Unlike the US, Europe does not have a position as the world’s leading power to lose. That is why the European Union has been willing to engage with China on economic and other issues – a smart approach overall. But Chinese President Xi Jinping’s turn toward authoritarianism has made such engagement almost impossible.

As for the US, the Biden administration should stand firm on human-rights issues in 2022. But it should also make clear to China that it does not begrudge the country its economic renaissance, such as by rescinding the tariffs Donald Trump put in place or increasing China’s influence over multilateral financial institutions like the International Monetary Fund.

PS: How should Europe’s fiscal-policy response to the omicron-fuelled fifth wave of COVID-19 infections differ from its response to previous waves? Are subsidies still the right approach?

DG: This latest wave of COVID-19 infections does not require major new subsidies programs, because it should not last nearly as long as previous waves. Nor should it require new lockdowns or business closures.

The emergency has ended. COVID-19 is a part of life, and governments must act accordingly. That means preparing a gradual transition back to normal, including normal expenditure and taxes.

PS: Last April, you highlighted a serious flaw in the EU’s COVID-19 vaccine contracts: they failed to provide incentives for producers to deliver doses earlier. While there is no longer a shortage of doses in Europe, there certainly is in the developing world, heightening the risk posed by the emergence of new variants like omicron. Can the Global South obtain the doses it needs with measures short of an intellectual-property waiver, which many are demanding?

DG: The vaccine shortage of early 2021 was caused not by intellectual-property rules, but by a lack of manufacturing know-how. This know-how is now spreading from Europe and the US to other parts of the world. For example, India has also become a major vaccine producer. So, what is needed today is not an intellectual-property waiver – this would do little for those most in need – but rather a push by advanced-country governments to ramp up production quickly. That should be sufficient to close the global North-South vaccination gap.

PS: You were an economic adviser to the Committee for the Study of Economic and Monetary Union, better known as the Delors Committee, which developed the plans for the euro. With the benefit of hindsight, how would you revise your advice? How closely does today’s eurozone resemble the one you imagined 30 years ago?

DG: Generals prepare to fight the last war. The plan elaborated by the Delors Committee – which formed the basis of the Maastricht Treaty – was based on the perceived problem of the previous decades: how to control high and variable inflation, but with much smaller financial markets. Today’s eurozone is very different: inflation tends to be too low, and financial markets are much larger. Thirty years ago, we should have obsessed less about price stability and focused instead on financial stability.