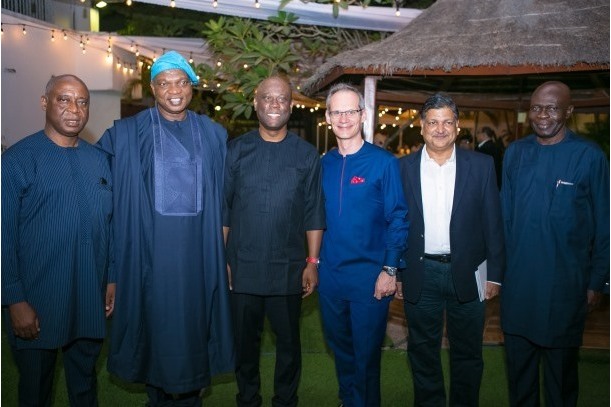 There is still so much to do to fast-track our response as leaders in various business sectors in the fight against HIV/AIDS – Access Bank Group CEO, Herbert Wigwe, and CEO of Total E&P Nigeria, Nicolas Terraz, Co-chairs of NiBUCAA.

The global commitment to prevent new HIV infections and ensure everyone living with HIV – the virus that causes AIDS – has access to treatment, reached some milestones in 2017. AIDS-related deaths declined by more than 51 per cent worldwide since reaching a peak in 2004, according to UNAIDS 2018 data. The latest data also shows that for the first time, more than half of the global population living with HIV was receiving antiretroviral treatment in 2017.

Nevertheless, HIV remains one of the world's most serious public health challenges. Approximately 36.9 million people are living with HIV/AIDS. Nigeria accounted for 8 per cent (3.1 million) of the population of those living with the virus in 2017. Equally worrying are the figures for newly-infected cases. About 5,000 new infections per day were recorded two years ago, bringing the total number of new infections in that year to 1.8 million, globally. These include 180,000 children, mostly from sub-Saharan Africa (SSA). These are also children who were infected by their HIV-positive mothers during pregnancy, childbirth or breastfeeding.

Advancements in the development of antiretroviral drugs have now made it possible for people with access to treatment to live long and healthy lives. In fact, scientific evidence shows that people who adhere to HIV treatment and have achieved an undetectable viral load – that is, the number of HIV viruses in the bloodstream – cannot pass the virus to others.

But despite the scientific advances in HIV prevention and treatment, there is still no cure for the virus and a large number of people living with HIV lack access to treatment. In Nigeria, the World Health Organisation (WHO) says only 33 per cent of people living with HIV have access to antiretroviral therapy (ART). Part of the reason for this dismal progress in access to treatment is the lack of awareness about HIV intervention programmes. Approximately 62 per cent of people who have the virus in Nigeria are unaware of their status.

This is why Nigeria has the second largest HIV epidemic in the world and one of the highest rates of new infections in SSA. 210,000 Nigerians were newly infected with HIV in 2017, although there has been a 5 per cent reduction in new infections between 2010 and 2017. Over the same period, there has only been a 16 per cent reduction in AIDS-related deaths, dropping from 180,000 deaths in 2010 to 150,000 in 2017. According to Avert, a UK-based HIV and AIDS charity, HIV prevalence is highest in the southern part of Nigeria. Six states – Kaduna, Akwa Ibom, Benue, Lagos, Oyo, and Kano – account for 41 per cent of people living with the virus.

The high rate of new infections and the HIV-related mortality in the country require urgent intervention from both the public and private sectors. The National AIDS and STIs Control Programme (NASCP) published the 2016 National Guidelines for HIV Prevention Treatment and Care, which provides some guidance for the prevention and treatment of HIV infection using a broad range of interventions. Some of these guidelines include the use of ART in treatment of HIV, adherence to antiretroviral therapy and improving efficiency of service delivery.

Private sector HIV intervention programmes are being led by Nigerian Business Coalition Against AIDS (NiBUCAA). The coalition has a stated commitment to fight the HIV/AIDS pandemic at all levels of intervention within the health system and the private sector workforce. Established in 2003, NiBUCAA promotes a workplace policy for the prevention of HIV and fosters practices for handling cases of HIV infection among employees.

As a leader in sustainability in the Nigerian banking sector, Access Bank Plc has shown its commitment towards prevention and treatment of the disease in the workplace. This commitment is part of the bank's award-winning sustainability agenda and why the bank's Group Managing Director/CEO, Herbert Wigwe, was appointed Co-Chair of NiBUCAA alongside the MD/CEO of Total E&P Nigeria Plc, Nicolas Terraz. Both of them took over from Pascal Dozie, who had been Co-Chair from the inception of the business network.

Every year, Access Bank organises events to mark World AIDS Day, which holds on December 1st. Following the events of last December, the bank joined other stakeholders under the umbrella of NiBUCAA on January 5, 2019, to discuss methods to combat HIV/AIDS in the country.

A known advocate for the development of the Nigerian heath sector, Dr. Wigwe implored all business leaders at the dinner to support local and national efforts aimed at HIV/AIDS prevention, testing, care and treatment services across communities in Nigeria. He emphasized the importance of health in the sustainable development of the country, stating that, “It facilitates growth, productivity, security and is also essential for better standards of living. There is still so much to do to fast-track our response as leaders in various business sectors in the fight against HIV/AIDS. As a coalition, expanding access to the most vulnerable and marginalized population is key to our goal of ending HIV/AIDS as a public health threat by 2030.”

Part of what an organisation like NiBUCAA is set up to address is the stigmatization and discrimination that people living with HIV are often vulnerable to. Adopting a workplace policy that eradicates stigmatization and discrimination is a good approach and in the best interest of public health. Expanding this policy across the country – a task that governments at all levels must undertake – will go a long way in encouraging HIV testing and enhancing prevention programmes.

UNAIDS estimates that $26.2 billion will be required by 2020 for AIDS intervention, globally. This financial requirement cannot be provided by government alone. At the NiBUCAA dinner last month, Nicolas Terraz, said “The fight against HIV/AIDS is too big for the government to handle alone. Hence, captains of industries have collective leadership roles to play in the multi- sectoral response to HIV and AIDS,” adding that the scourge is one that must be won at all costs.

More awareness needs to be created among people living with HIV in Nigeria. Access to antiretroviral treatment must also be addressed. Access to programmes such as prevention of mother-to-child transmission (PMTCT), HIV education in schools, use of condoms has to improve. An estimated 220,000 children below the age of 14 were living with HIV in 2017. The lives of these children should be preserved through access to adequate care and treatment.

51 per cent of people living with HIV in Nigeria are women. To reduce HIV infection among women and girls, this demographic of the Nigerian society needs to be empowered and provided with more economic opportunities as well as better HIV services and education.

Omobolanle Victor-Laniyan, Head, Sustainability at Access Bank, who also spoke at the last NiBUCAA event, advocated for more companies to participate in the efforts to combat HIV/AIDS. She said NiBUCAA assists member-companies to develop and implement workplace HIV/AIDS policies and programmes, including education on prevention, safer sex practices, confidential counselling, testing and treatment, amongst others.