What post-WWII Japan teaches about economic recovery in 2020

The time to rethink strategies for fighting poverty and preparing for future crises is now.

Economies around the globe face an uphill battle in the wake of the COVID-19 pandemic. Many governments have struggled with the choice between implementing lockdowns or opening their economies and risking the spread of the virus. Governments with resources have unleashed stimulus packages to try to keep their economies healthy.

In this regard, one country leads the pack. Japan’s government has committed to spend a staggering $2.2 trillion in response to the pandemic, or roughly 40% of the country’s GDP. While many factors beyond government spending contribute to how a country fares against such a crisis, Japan’s ability to stimulate its economy gives it a large advantage in weathering the economic storm created by the coronavirus.

In their new research paper, my colleagues Efosa Ojomo and Rich Alton describe how Japan’s economic resilience today is rooted in its response to a previous crisis: WWII. Following the war, Japan’s GDP per capita was less than that of countries like Colombia or Mexico. Food was in short supply, as were industrial raw materials needed to jumpstart the economy, such as metal and rubber. So how did Japan go from rampant poverty to having one of the most prosperous and resilient economies in the world?

The answer, in large part, has to do with the way innovators saw their circumstances after the war. At the time Japan was teaming with nonconsumption – the phenomenon when people go without products or services they would otherwise benefit from consuming because those products and services are too expensive or inaccessible. However, the silver lining of nonconsumption is that it implies opportunity, something companies like Toyota, Sony, Honda, Panasonic, and others recognized. Rather than becoming discouraged when observing the large number of Japanese people who couldn’t afford conventional products, these companies transformed those previously expensive, complex products into ones that were simple and affordable, such that average Japanese people could begin consuming them. We refer to this process as market-creating innovation.

Consider Toyota. Instead of simply taking advantage of cheap Japanese labour to build products for wealthy consumers abroad, Toyota set out to create simple, practical cars that average people in Japan could afford. The company was well suited to understand the needs of Japan’s local population, whose main method of transportation was by bicycle or on foot. Founder Kiichiro Toyoda dictated that their cars needed to be “economical vehicles that can withstand poor roads and are more practical for the people of East Asia.” Beyond making their products practical and affordable, the company also developed a driving school, auto dealerships, and a trade school for training middle-rank employees. By building a new market for cars in Japan, Toyota created jobs, profits, infrastructure, and instilled a culture of innovation that greatly contributed to Japan’s economic development.

Similarly, Sony rose from humble beginnings in a bombed-out factory to successfully build 12 different market-creating innovations by 1980, such as the original pocket transistor radio, the video cassette player, the 3.5-inch floppy disk drive, and the now-famous Sony Walkman. Toyota and Sony, together with other firms like Sharp, Canon, Nintendo, and Ricoh, all had one thing in common: they initially chose to focus on creating products for local nonconsumers, necessitating the development of capabilities in R&D, sales, marketing, and distribution in addition to manufacturing. This investment created a wave of sustainable development that not only beat Japan’s poverty problem, but created abounding prosperity. 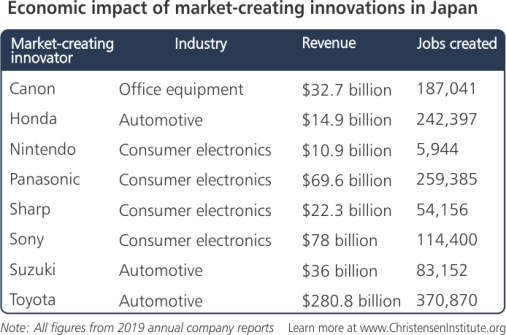 A roadmap for the post-pandemic world

Imagine if Japan had responded to the economic devastation of WWII only by today’s conventional methods for fighting poverty, such as building new schools or digging wells to increase access to clean water. Rather than developing powerful homegrown industries, Japanese communities would likely have only made marginal progress that hinged on the consistent flow of external aid. Instead, Japan’s investment in market-creating innovation not only demonstrated how to create successful new businesses in unfortunate circumstances, but laid the foundation for the resilient prosperity it enjoys today – offering a blueprint for countries in the aftermath of the COVID-19 pandemic.

The time to rethink strategies for fighting poverty and preparing for future crises is now.