The factors that could push the U.S. and Iran to war

The absence of meaningful channels of communication will … reduce the ability of both countries to de-escalate tensions after an accident or initial confrontation.

The United States is sending additional forces to the Persian Gulf as Iran prepares and mobilizes its army; together, the countries' actions are significantly increasing the possibility of war. Compounding the risk is a faction within the White House, epitomized by hawkish national security adviser John Bolton, that is more eager than others in the administration to start a conflict with Iran. Bolton, naturally, has ideological counterparts in Iran, especially in the Islamic Revolutionary Guard Corps (IRGC), who are also spoiling for a fight.

A war between the United States and Iran would have not only far-reaching regional consequences, but it would also have major global economic and energy implications. Such a conflict would also represent a major distraction for the United States at a time when it is attempting to shift its attention and resources to the great power competition with China and Russia. Nonetheless, there are some factors that could drive Washington and Tehran toward war.

But as leaders in Washington and Tehran have emphasized, the two countries remain wary of a costly war against each other. U.S. President Donald Trump has many backers in Washington, particularly the Pentagon, who would prefer to avoid a war and focus the country's attention and resources on the ongoing great power competition with Russia and China. Tehran, meanwhile, can hardly be expected to be cavalier about a potential conflict with Washington, especially given the massively disproportionate strength between the two sides and the devastation that such a conflict could inflict on Iran's people and, potentially, its government. But caution aside, a broader conflict is not beyond the realm of possibility, what with the countries' mutual hostility and mistrust, lack of communication channels to quickly resolve a conflict, as well as the setup of Iran's forces – which have a major incentive to strike while the iron is hot.

Being Quick on the Draw

Fully cognizant of the U.S. military's vastly superior conventional military forces, Iran has invested for decades in asymmetric capabilities such as proxy forces, ballistic missiles, naval mines and fast-attack craft to better strike the United States, critical energy infrastructure around the Persian Gulf and other key strategic targets in the region. These forces and tactics, however, hardly compensate for Iran's overall relative weakness; indeed, Tehran is fully aware that many of these assets are particularly vulnerable to a U.S. strike while they remain tied up in port, garrisons or bases. 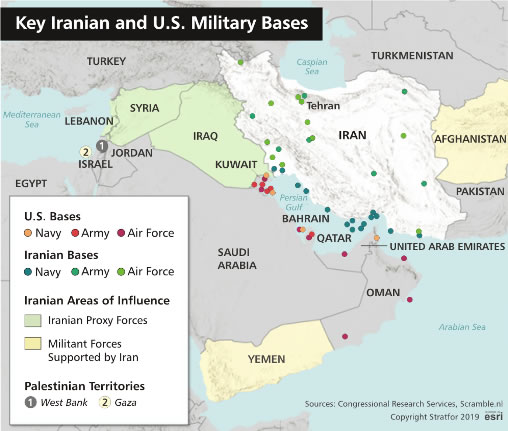 For instance, Iran's ability to threaten or close the Strait of Hormuz depends heavily on IRGC naval assets that consist of mine-laying craft, missile and torpedo boats, armed speedboats, and coastal anti-ship cruise missile batteries. Not only are many of these assets highly exposed to a precision U.S. strike while still in their ports or bases, but they would also face the constant risk of destruction from U.S. or allied airpower even if they manage to sally forth before a conflict begins. In other words, Iran has a very finite window to lay as many mines as possible and inflict as much damage as possible in the Strait of Hormuz before the United States and its allies greatly reduce its ability to do so. The same principle applies to Iran's arsenal of ballistic missiles when it comes to the country's ability to strike U.S. bases and energy infrastructure in the region. If Tehran fails to fire such missiles in time during a conflict, Washington could destroy many of them before they deliver their deadly payloads.

Iran thus faces a real use-it-or-lose-it dilemma, as it not only has an overriding reason to respond rapidly to an attack but also act preemptively to inflict as much destruction as possible before its adversaries inevitably damage its assets with their much heavier firepower. To be clear, even months of U.S. attacks would not completely disarm Iran, but the longer Tehran fails to deploy its asymmetric assets, particularly its missile and naval forces, the greater the risk the United States will destroy these weapons before the Islamic republic can use them.

Another factor that could escalate the U.S.-Iranian standoff is the lack of effective direct communication between the two countries' forces. The absence of hotlines and proven methods to immediately calm tensions risks fomenting more mistrust and misunderstandings about the adversary's intentions. This lack of channels for dialogue even extends to the highest ministerial levels. Asked recently whether Iran and the United States could rapidly communicate to avert a crisis, Iranian Foreign Minister Javad Zarif said that, unlike his quick-fire discussions with former U.S. Secretary of State John Kerry, he and current U.S. Secretary of State Mike Pompeo have never spoken directly. What's more, Zarif said he did not feel compelled to answer any of the secretary's calls due to their acrimonious relationship.

Of course, if things did escalate, Iranian and U.S. officials would eventually succeed in contacting each other if they desire to do so, but in a situation in which minutes – rather than hours – are critical, the lack of a history of communications or set channels to resolve conflicts will undoubtedly hinder rapid de-escalation efforts. In effect, by the time American and Iranian officials talk, the cycle of attack and counterattack might easily have acquired a momentum that the two capitals can do little to halt with just a few conversations.

On the whole, both the United States and Iran appear keen to avoid a major war; likewise, an armed confrontation is significantly less likely than the countries' continued standoff by non-military means. But the combination of profound mistrust, the involvement of a plethora of proxy actors and secondary players, Iran's imperative to move fast once threatened, as well as the lack of effective communication channels, all serve notice that a miscalculation could ignite a fire that even cooler heads in both capitals would struggle to put out.

“The Factors That Could Push the U.S. and Iran to War” is republished under content confederation between Financial Nigeria and Stratfor.