The CBN has acknowledged the continued rise in inflation as a cause for concern.

0 Comments
A view of Central Bank of Nigeria

The mandate of the Central Bank of Nigeria (CBN) includes ensuring monetary and price stability, maintaining the nation’s external reserves, and providing economic and financial advice to the Federal Government (FG). To carry out its mandate, the CBN’s Monetary Policy Committee (MPC) meets every other month to, among other things, review economic and financial conditions in the economy, and determine appropriate short- to medium-term policy stances.

As with previous MPC meetings, a number of monetary policy stances were agreed at the January 2021 meeting. These include retention of the Monetary Policy Rate (MPR) at 11.5 per cent, holding the Cash Reserve Ratio (CRR) at 27.5 per cent, and leaving the Liquidity Ratio (LR) unchanged at 30 per cent.

The apex bank also intervenes in the economy by providing credit facilities through state-owned and private financial institutions. The bank responded to the COVID-19 pandemic by extending the moratoriums on all principal repayments for CBN intervention loans that were under moratorium prior to the pandemic. The moratoriums were extended by an additional one year. CBN also reduced the interest rate on its intervention facilities from 9 per cent to 5 per cent and unveiled a series of targeted facilities such as the N50 billion credit facility for households and small and medium enterprises (SMEs), and the N100 billion credit support intervention for the health sector.

The aims of these interventions are to support and generate economic output and employment, while also carrying out its core mandate, particularly with regard to price stability. However, these policy interventions do not appear to be having the desired effects. According to the monthly inflation report released by the National Bureau of Statistics (NBS) in January, Nigeria’s inflation rose for 16 consecutive months to 15.75 per cent year-on-year last December. 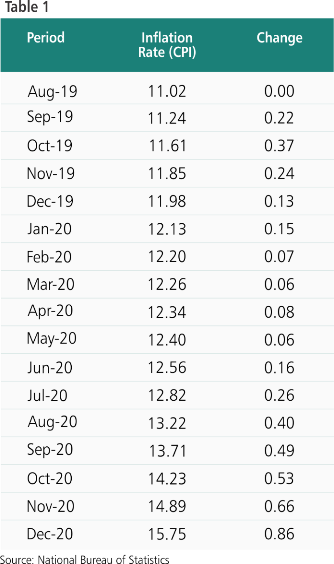 As illustrated in Table 1, the December inflation figure represents a 0.86 percentage point increase when compared to the preceding month’s increase of 14.89 per cent. It is also the highest inflation rate recorded since November 2017 when inflation rate was 15.90%.

The latest available data by the NBS on unemployment (see Table 2) provides evidence of a steady and consistent rise in Nigeria’s unemployment rate. 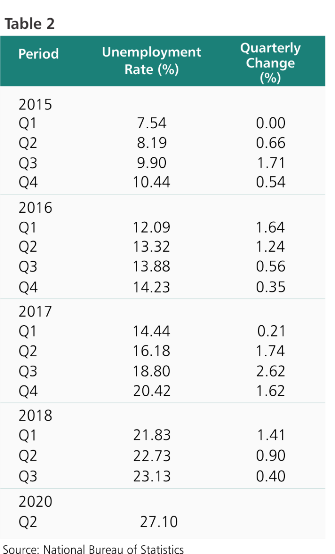 Is Nigeria’s inflation a monetary phenomenon?

Using the quantity theory of money, monetarists argue that changes in general price levels are proportionally related to changes in money supply. By this definition, any variation in the quantity of money in circulation results in a comparative change in inflation. In other words, excess supply of money results in aggregate excess demand, thereby causing inflation.

Keynesian economic theory supports increased government spending and reduced taxes during periods of economic stagnation or depression. These interventions are expected to stimulate employment and output.

Structuralist economists differ from Keynesians as their economic theory takes into account the structural features of an economy. For instance, structuralists argue that developing economies are characterized by market fragmentations and various structural rigidities like poor power supply, insecurity, hostile business climates, volatile exchange rates and dependence on primary export. Therefore, inflation in such economies is caused by a combination of factors, key among which are the composition of demand for products and services, weak productive structures and bottlenecks in food supply chains. From the forgoing, the explanations for inflation based on traditional monetary or Keynesian economic theories do not apply to developing economies.

Irrespective of the different economic theories and how they work in other economies, what should matter as regards Nigeria are the structure and peculiarities of the economy. A number of questions begin to arise when we start looking at it this way. For instance, would reducing the supply of money lower inflation in Nigeria? Do vulnerabilities to external shocks and changes in international prices of goods and services cause inflation in Nigeria? Are regular currency depreciations, which cause import prices to rise, inflationary? Does insecurity in Nigeria exert inflationary pressure even as insurgency reduces agricultural output? Is the cost of doing business exorbitantly high in Nigeria, resulting in excessive markups? Can increase in output and employment reduce inflation?

The CBN has acknowledged the continued rise in inflation as a cause for concern. The bank attributes the high inflation to persistent exchange rate pressures, dwindling capital flows, weak growth of foreign reserves, and other structural issues such as insecurity across the country, recent hikes in electricity tariffs and the deregulation of petrol prices.

Given the structural issues in the Nigerian economy, it is logical to align with the structuralist school of thought and posit that the country’s inflationary phenomenon cannot be tackled using traditional monetary policies. Most of the working population are in the informal sector, unemployed and in extreme poverty. The tools and incentives required to generate employment and production such as electricity, water, good roads, etc. are in bad states and out of the purview of monetary policies.

Empirical evidence from a myriad of research and related data show that a single explanation of inflation does not work for developing economies like Nigeria. Expansionary monetary policies aimed at financing social and economic interventions are not always effective in curtailing inflation. Rather, a combination of policies and structural interventions are more effective in developing economies.

In tackling the twin issues of rising inflation and unemployment, perhaps policymakers should attempt to answer two critical questions: (i) Why is it that aggregate output, particularly agricultural produce, continue to lag despite increased aggregate demand and the hundreds of billions of naira invested in farming by the FG and CBN? (ii) Why is it impossible to fully finance government’s capital expenditure through savings and other revenue sources as policymakers are now relying almost exclusively on excessive deficit financing?

Given these imponderables and the difficulties in curtailing inflation in Nigeria due to the various structural issues, I expect inflation to nudge upwards of 20 per cent in 2021 while unemployment rate will close the year at approximately 30 per cent. Although the country is still a long way from stagflation, consistently rising inflation and unemployment rates coupled with weak or negative economic growth could eventually move the country to that destination.

Available data appear to confirm that inflationary pressures arising from the constraints to higher agricultural output have an impact on the other three constraints (ii, iii, and iv above). This could be due to the exclusion of scores of food and other items from access to foreign exchange for their importation as well as the inelasticity of demand for food items relative to available supply.

Nevertheless, a coordinated and concerted effort focused first on the agricultural constraints using a combination of monetary, fiscal and structural policies may just be a good starting point to address Nigeria’s rising inflationary and unemployment trends.