State of readiness of the Sealink Project As at the end of January, 26 ships and barges were ready for deployment for Sealink’s operations.

Last month, the Chairperson, Sealink Implementation Committee, Dabney Shall-Holma, and officials of Nigerian Export-Import Bank (NEXIM Bank) joined the leadership and members of the Lagos Chamber of Commerce and Industry (LCCI) to hold a sensitization workshop on the Sealink Project, in Lagos. The Director General of LCCI, Dr. Muda Yusuf, in his welcome remarks underscored the importance of not just the event but the Sealink Project itself.

The Sealink is a brainchild of the Organized Private Sector (OPS), as affirmed by Hope Yongo, Technical Adviser to the MD/CEO of NEXIM Bank. As he stated in his keynote presentation, about seven years ago, some private sector leaders approached the Bank, under the aegis of the Manufacturers Association of Nigeria (MAN)’s Export Group, to discuss the need to promote direct maritime connectivity within West Africa. Such direct trade connectivity would ensure that Nigerian goods and services exports increase and would be more cost-effective.

Nigerian exporters were disconcerted that ships meant to take cargoes from Apapa Port in Lagos, to Tema Port in Ghana, sometimes take up to six weeks. The challenges include inefficient transit regime, majorly the shipment of such cargoes first to Europe where they would be transshipped to the destination port in neighbouring Ghana. Because of the double handling and transshipment, the cost of logistics in the West African region is astronomical and uncompetitive, often higher than shipping from faraway China. Moreover, the long dwell time of the cargoes at the coastal areas exacerbates cargo losses.

These challenges prompted the conversation on the Sealink to provide direct maritime transportation of cargoes in the sub-region. NEXIM Bank acted on the prompting. In 2013, the Bank conducted the initial feasibility study for the project and subsequently began to build broad private sector interests in the Sealink Project.

The Federation of West African Chambers of Commerce and Industry (FEWACCI), the umbrella body of the chambers of commerce and industry in West Africa, pledged to support the efforts at establishing the dedicated regional shipping line to boost intra-regional trade. Also, the ECOWAS (Economic Community of West African States) Commission adopted the Sealink as one of the seven Priority Projects under its development programme.

Transimex, one of the largest logistics company in Central Africa, also joined the efforts to promote the Sealink. This expanded the outlook of the Project to cover both West Africa and Central Africa. But with the advent of the African Continental Free Trade Area (AfCFTA), which will take off operationally on July 1, 2020, Sealink is now Pan-Africa in outlook. As disclosed by its promoters during the workshop, the Sealink has received expressions of interest to invest from the economic powerhouses of Africa, including Egypt, Tunisia, Morocco and South Africa, apart from those of the aforementioned two sub-regions.

According to Yongo, some have asked: “Is NEXIM a maritime organization?” No, it is not. NEXIM Bank is the official Trade Policy Bank of the Federal Government of Nigeria. The Bank is mandated to provide financing, risk-bearing facilities and advisory services to promote Nigeria’s non-oil exports. Part of the products portfolio of NEXIM Bank is the ECOWAS Trade Support Facility (ETSF), a N1 billion allocation for funding Nigerian exporters trading in the ECOWAS sub-region.

NEXIM Bank’s trade finance activities have recorded successes as well as acquainted the Bank with the challenges Nigerian exporters face. Two cases in point were shared at the workshop. A few years ago, NEXIM Bank provided trade financing for the exportation of a consignment of Indomie noodles to Liberia. It was a pilot effort, then, by the producer, before it grew to the big company it has since become. So, the financing was for N5 million.

Unexpectedly, the company found a ship that was going directly from Lagos, Nigeria to Liberia. Within one week, the ship had docked in Monrovia. And within two weeks, the two containers of Indomie had been sold. NEXIM Bank similarly supported the export of Chivita fruit juices to Senegal, where the Nigerian brand was automatically preferred to the popular juices imported from Europe in the country.

In both of these examples, however, the companies could not consistently take advantage of the potentials of their products in the sub-regional markets because of the more usual logistical bottlenecks. This underscores the imperative of the Sealink Project. Whereas markets exist for Nigerian products in the sub-region, the absence of necessary trade infrastructure has impeded the ability of Nigerian exporters to take advantage of the opportunities. 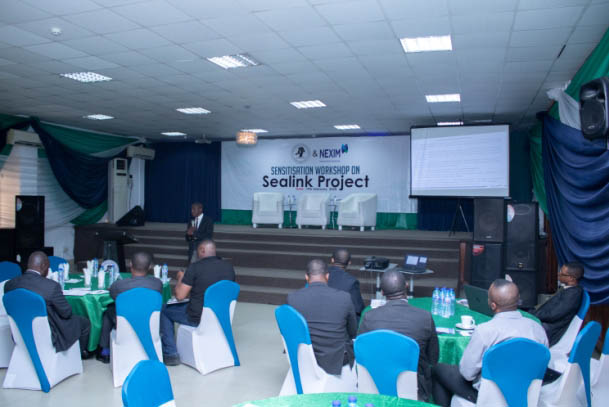 A cross-section of participants at the sensitisation workshop on the Sealink Project, which was organised
last month by Lagos Chamber of Commerce and Industry and NEXIM Bank, at LCCI, Lagos headquarters

In 2015, the African Development Bank (AfDB) provided grant funding for further support of the promotional activities of the Sealink. As the company readies to launch its operations in H1 2020, support for its operations are growing. However, it is important to state that the Sealink is not being built on institutional largesse. The company is in its promotional stage, following the broad support for its facilitation by NEXIM and other stakeholders because of its vital value proposition.

After launching its pilot operations, the Sealink will transform to a commercial enterprise. Its promoters said that the company would raise investment by private placement or by issuing an Initial Public Offering (IPO).

In the meantime, during its promotional stage, support for the operational take-off of Sealink are being provided by multiple, interested stakeholders and partners. This include shipowners, operators of shipyards and logistics services providers. Many of them are Nigerian entities. Among the foreign entities are Chinese, American and Portuguese investors. They have committed their platforms, ships and barges. In total, as at the end of January, 26 ships and barges were ready for deployment for Sealink’s operations.

With the support of NEXIM Bank, the Sealink Implementation Committee is strategizing for both financial and operational success. Some of the financial partners that have pledged support for the Project include African Export-Import Bank (Afreximbank) and the EXIM Bank of China.

The Sealink is working with Nigerian Ports Authority (NPA), and has secured approval to use the Ikorodu Lighter Terminal to serve coastal trade. Also, the National Inland Waterways Authority (NIWA) has given approval for the Sealink to use the country’s inland waterways. Work is now underway with the Nigerian Navy to survey the rivers and publish a safe navigational chart that would be internationally-recognized for the operations of Sealink. The survey will advise on where to sweep or dredge the rivers. According to Yongo, Sealink plans to offer bespoke services to exporters, based on their cargo types and sizes, as well as customized deployment of its vessels and barges based on the depths of the rivers.

To handle bulk cargoes, Sealink has brought in a private port into the consortium, namely the Burutu Port, near Warri, Delta State. Burutu Port, which is the oldest port in Nigeria, was built by the British in the pre-colonial era. It has two warehouses and capacity to handle a million tons of bulk cargoes per day.

Crashing the Cost of Logistics

Sealink plans to reduce the cost of transportation of cargoes by up to 70 per cent. To achieve this, the company is currently collating information on exporters, their cargoes, volumes, trade frequency, evacuation points and destination ports. Sealink is also building its fleet in accordance with the cargo types, including bulk cargoes, container cargoes and perishable consignments. By smartly deploying its vessels and barges according to the profiles, Sealink aims to optimize its various capacities to bring down the cost of cargo transportation.

The critical off-takers the company has identified are miners of solid minerals. By providing logistical services to back mining of solid minerals in Nigeria, Sealink aims to establish the country on the global map of mining jurisdictions and help deliver on the export diversification aspirations of the government.

Logistics is critical to the success of the mining industry. The absence of good logistical support has for long undermined the potentials of the Nigerian solid minerals sector. As Yongo noted, logistics often undermine the viability of most mining projects in Nigeria and the country’s trade in solid minerals.

Sealink plans to cover the whole of Nigeria, but it is starting with Lokoja and Burutu for its inland waterway operations. The state of readiness of Sealink is thus: The promotional company is currently undertaking cargo solicitation and collection of information. Once it completes its ongoing surveys, Sealink plans to publish its chart, Notice of Readiness (NOR), routes and frequencies, and start operations in Q2, 2020.

Many African shipping lines have failed. Indeed, it is common for monopolies – often public utilities – to fail in Africa. NEXIM Bank says it is very mindful of the sustainability of Sealink, necessitating its punctilious planning before launch. Moreover, the company is not a public utility. It is being promoted as a Public Private Partnership (PPP) and will operate in the ethos of the private sector.

Previous articles under the series:
Can Nigeria benefit from African free trade?
How to make your own luck in emerging markets
Factoring can be a game changer for Nigerian SMEs and trade
Boosting investor confidence is critical to the success of AfCFTA