Boosting investor confidence is critical to the success of AfCFTA AfCFTA may become operational at a time Nigeria's trade sector is still in double-dip recession, which began since Q2 2019.

One of the greatest challenges of the African Continental Free Trade Area (AfCFTA) is for the trade agreement to catalyse Foreign Direct Investment (FDI) flows in the region. Almost two years since the AfCFTA was adopted in March 2018, the jury is still out on whether the prospect of increased trade integration on the continent will expand the outlook of FDI.

For now, Africa continues to retain its dismal status as the smallest recipient of FDI in the world. In 2019, the year history was made with the entry into force of AfCFTA, the continent accounted for a measly 3.5 per cent (or $49 billion) of global FDI inflows.

A different trade agreement, namely the United States-Mexico-Canada Agreement (USMCA), reportedly paid off for Mexico, in particular, prior to even going into effect. According to the latest investment trends report released last month by United Nations Conference on Trade and Development (UNCTAD), FDI to Mexico reached an estimated $35 billion, up 3 per cent compared to the previous year. Investment in the Central American country was mainly buoyed by expectations for easier economic relations due to the USMCA, which is an updated version of the nearly 25-year-old North American Free Trade Agreement (NAFTA).

The U.S. pushed for a renegotiation of the trade pact after it was fiercely condemned by President Donald Trump as “the worst trade deal ever made.” The new agreement, signed by leaders of the three countries in November 2018, includes new policies on labour and environmental standards, intellectual property protections, automobiles, and provisions on digital trade.

FDI to Africa is just a fraction of flows to developing Asia. Notwithstanding a 6 per cent decline, FDI flows to developing Asia accounted for one-third (or $473 billion) of global FDI last year. India, the world's eighth largest FDI recipient in 2019, recorded inflows of $49 billion. Per the UNCTAD report, the top five recipients of FDI in 2019 were the United States with $251 billion, China ($140 billion), Singapore ($110 billion), Brazil ($75 billion) and United Kingdom ($61 billion).

After two consecutive years of decline of inflows, FDI to Nigeria – Africa's largest economy – resurged by 71 per cent to $3.4 billion last year. Yet this figure is merely 6.9 per cent and 4.5 per cent of the FDI of India and Brazil, respectively, in 2019.

The reason for Africa's low foreign investment flows, according to UNCTAD, is the slow pace of structural reforms in the region coupled with global economic uncertainty. Despite these constraints, Egypt’s FDI increased by 5 per cent to $8.5 billion. The country also remained the largest recipient on the continent. Investor confidence in Egypt has been strengthened due to ongoing efforts to implement economic reforms in the country.

FDI to Africa is still largely being driven by commodity-producing sectors. Nevertheless, there are other major investments in non-commodity sectors that emerged last year. For Egypt, the country recorded major investments in telecommunications, real estate and tourism sectors.

In a boost for Nigeria’s solid minerals sector, the $600 million steel plant in Kagarko, Kaduna State, is a milestone for investment diversification. Alok Gupta, Managing Director of African Natural Resources and Mines Limited (ANRML), the company that is building the integrated steel plant, said the investment is set to be Nigeria’s biggest non-oil FDI.

The project is expected to mine over 5 million tonnes of iron ore per annum. Waste heat recovered from the plant will be used to generate about 36 megawatts (MW) of electricity, which would be partly used for captive consumption. Gupta also said the steel plant will create 3,000 jobs when it comes on stream.

While the relationship between FDI and trade is not one-dimensional, a lot of studies and evidence indicate that the relationship between the two activities is complementary, particularly for developing economies. For instance, FDI – which provides a vehicle for technology transfers, job creation, amongst other benefits for host developing countries – is usually associated with increased exports.

It is no coincidence that the dismal flows of FDI to Africa occurs contemporaneously with low intra-Africa trade of 17 per cent. This means that only 17 per cent of African exports go to other African countries, compared with intra-regional trade levels of 61 per cent in Asia and 67 per cent in Europe. As earlier stated, one-third of the world’s FDI stock is in Asia. This heavy concentration of FDI is not unconnected with the high level of trade integration in the region. Improved economic relations is a catalyst for trade and investment.

There is no surprise that FDI to the United Kingdom fell by 39.7 per cent from $101.2 billion in 2017 to $61 billion last year, according to UNCTAD figures, as the country negotiated its exit from the European Union's single market. The UK would have to prove its mettle again as a competitive investment hub post-Brexit before it can recover from the fallouts over its decision to leave the EU. According to surveys conducted by the Institute of Directors (IoD), businesses’ confidence in the British economy fell to its lowest point in 2018 (-38 per cent) as employers scaled back on hiring and investment plans. Businesses’ confidence, however, swung into positive territory (21 per cent) in December 2019, following the Conservative Party's decisive election victory. 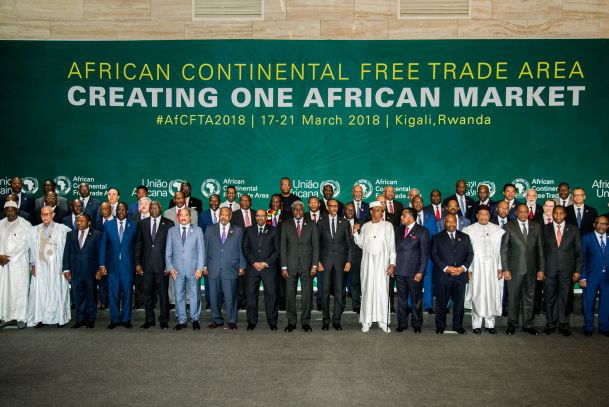 African leaders after signing, on March 21, 2018,  the African Continental Free Trade Area, the Kigali
Declaration and the Free Movement Protocol

AfCFTA is no silver bullet to increased trade and investment in Africa. The free trade area, scheduled to become operational in July 2020, comes with various opportunities – but also challenges that must be surmounted for it to be globally competitive. Among the constraints African countries need to overcome, infrastructure deficits and weak supply chains are the topmost.

To realise its ambition to become the world’s largest free-trade zone since the creation of the World Trade Organisation in 1995, experts have said African governments would need to increase investment in infrastructure and ramp up support for small and medium-sized enterprises. Mukhisa Kituyi, Secretary-General of UNCTAD, said the governments would have to mobilise the financial resources needed without increasing the risk of debt distress. One way to mobilise resources without the risk of increasing the already-high debt levels in Africa is to leverage the trading zone to become a global investment hotspot.

Enacting favourable policies to attract FDI and promote the growth of the African trade sector is critical to achieving the economic prosperity and wellbeing of the people. But unfortunately, AfCFTA may become operational at a time Nigeria’s trade sector is still in double-dip recession, which began since Q2 2019. The sector has experienced protracted sluggishness in the last few years. After contracting by 0.63 in 2018, the sector came out of a recession in the first quarter of 2019, before sliding into double-dip recession in Q2. The trade sector further contracted by 1.45 per cent in Q3 2019 from 0.25 per cent in the preceding quarter.

Data from the National Bureau of Statistics (NBS) shows that the contribution of trade to gross domestic product (GDP) in Q2 was 15.23 per cent, down from 15.80 per cent recorded in a similar period in 2018. While it is the second-largest contributor to the country’s GDP, after agriculture, the trade sector’s downturn has worsened recently because of the closure of Nigeria’s land borders since August 2019.

Such protectionist policies – regardless of the security imperatives as touted by the government and the need to achieve import substitution – are inimical to investor confidence, which is necessary for boosting domestic investment and trade.

Previous articles under the series:
Can Nigeria benefit from African free trade?
How to make your own luck in emerging markets
Factoring can be a game changer for Nigerian SMEs and trade