Public agricultural funding should focus on mitigation and synergies between reducing emissions and producing more food.

To both feed the world and solve climate change, the world needs to produce 50% more food in 2050 compared to 2010 while reducing greenhouse gas emissions by two-thirds. While government funding has an important role to play, a new World Bank report I wrote with seven co-authors found that agricultural subsidies are currently doing little to achieve these goals, but have great potential for reform.

Governments provide on average $600 billion per year for agricultural support in the countries that generate two-thirds of the world’s agriculture. This is a lot of money. Government support averages 30% of the agricultural production in these countries (measured by “value added”). Yet our report found that only 5% of this funding supports any kind of conservation objective, and only 6% supports research and technical assistance. Pure income support accounts for 70%.

By redirecting even a portion of total agricultural subsidies, governments could do more to feed the world while reducing greenhouse gas emissions.

Where Are Agricultural Subsidies Currently Going?

What is needed to mitigate the 25% of the world’s greenhouse gas emissions contributed by global agriculture, including emissions from land use change? The good news is that many opportunities exist to boost agricultural productivity to provide more food on existing agricultural land while reducing emissions.

Opportunity one is to increase natural resource efficiency by producing more food per hectare, per animal and per kilogram of fertilizer and other chemicals used. Opportunity two is to put in place measures to link these productivity gains to protection of forests and other native habitats. Opportunity three is to pursue innovations, because reaching climate goals for agriculture — just like for energy use — requires new technologies and approaches.

Reanalyzing data from the OECD and using country studies, our report examined whether farm support programs are doing any of these things today. Despite a few good examples, most public support is making little contribution.

One reason is that half of the support occurs in the form of trade and other market barriers governments impose to boost farm prices in their own countries. Although these barriers increase or stabilize income for one country’s farmers, they result in lower income for farmers elsewhere in the world. As a general rule, the world’s poor farmers are losers rather than winners when it comes to global agricultural subsidies, even though it is they who would most benefit from some reduction in their risk due to fluctuating prices and incomes. And of the 20% of total farm support that comes in the form of direct production subsidies to farmers, most goes to the largest farms that are best able to handle price and income variability on their own.

In India and Africa, fertilizer subsidies are designed to stimulate production, but our report found limited and unequally distributed benefits. In India, these subsidies are contributing to both excessive use of fertilizer overall and an imbalance of nitrogen to other nutrients.

Although modest, conservation spending has been growing in various forms, but could be better used. For example, most conservation funding reestablishes forests or grazing on cropland, which could generate real benefits. But because most of these programs are temporary, the land can be re-plowed, risking the loss of carbon and biodiversity gains. These programs also have mostly restored plantation forests, which store less carbon and can have even less biodiversity than the farmlands they replace.

Some countries, including the United States and EU nations, have made efforts to condition financial support to farmers on compliance with environmental criteria. But we found that those conditions have mostly been limited.

Because of trade agreements, governments have also shifted some of their subsidies so that they are less market distorting. As a good result, farmers have less incentive to produce more food than needed in some places or to use too many inputs like fertilizers and other chemicals. These changes have the potential to lead to more efficiency — and did so in New Zealand, where reforms were the most dramatic— but will probably not have significant effects on greenhouse gas emissions globally. 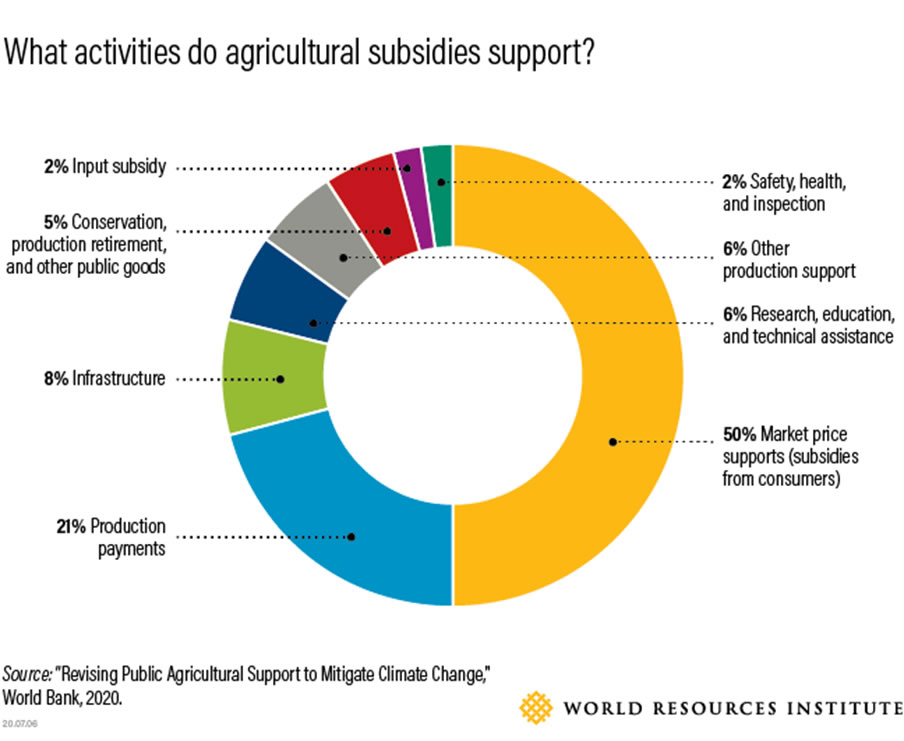 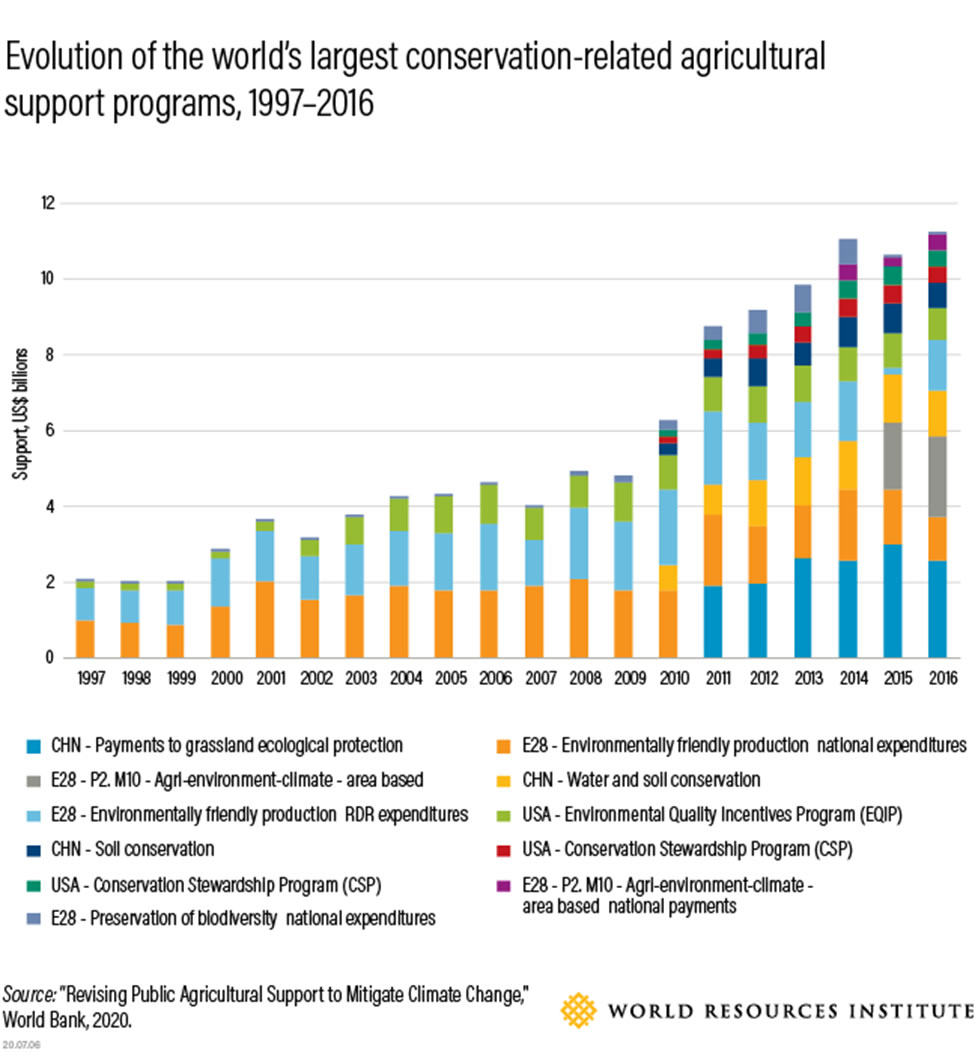 How to Put Agricultural Subsidies to Better Use?

Despite a concerning global picture, country and regional studies show some areas of progress that governments around the world can build on to meet our challenging climate and food security goals. Key reforms include:

•    Condition farm financial aid on the protection of forests and other native areas. In Brazil, for example, the government conditioned low-cost agricultural loans to farms and municipalities that curbed deforestation. Although imperfectly enforced, these programs helped to reduce deforestation significantly. This example highlights the potential to link efforts to produce more food on existing land with efforts to protect forests.

We recommend that other countries follow this approach. This is important even in developed countries like the United States, where farmers continue to plow up carbon-rich native prairie.

•   Condition funding on environmental practices, and use systems of “graduated” payments that reward farmers for better and better performance. Europe put in place a structure that in theory conditions all direct funding to farmers based on some environmental practices and distributes much aid in ways that is supposed to improve the environment. Some is even supposed to address climate change. The environmental requirements for these funds have been too limited to provide much environmental benefit, and little money has actually gone towards climate mitigation. Still, the structure is partially in place to make the money achieve real gains.  By offering higher payments based on better performance, such systems can avoid setting one set of standards that are too low to be meaningful.

•   Support more efficient uses of fertilizer in high fertilizer-use countries, and take a more balanced approach to boosting fertilization everywhere. The Chinese government phased out fertilizer subsidies and started to fund improvements in nitrogen and manure management. In India, the government conditioned nitrogen fertilizer subsidies on use with an additive designed to reduce nitrogen losses to the environment. In Kenya, government programs helped dairy farmers increase their use of nitrogen-fixing, high-protein shrubs, an alternative to using fertilizer, to increase the efficiency of their dairy production.

Overall, governments around the world should redirect more agricultural funding to focus on mitigation and the synergies between reducing emissions and producing more food. A first step toward a sustainable food future is to make better use of the large financial support governments are already providing.

Tim Searchinger is a Senior Fellow and Technical Director, Food Program, at World Resources Institute; and a Research Scholar at Princeton University.