The jury is out as to whether the long-awaited enactment of the PIB is the desired push to take Nigeria’s oil and gas industry forward.

Since the enactment of the Petroleum Act in 1969 (now adjudged by industry experts to be outdated), particularly from 2008, successive governments in Nigeria have attempted to enact an all-encompassing Petroleum Industry Bill (PIB) that addresses the shortcomings of the Petroleum Act, with a view of bringing it in line with modern realities. The 9th National Assembly, made up of the Senate and the House of Representatives, recorded a remarkable milestone on 1st July 2021 by passing the PIB. Following the adoption of the Conference Committee reports on the PIB by the Senate and the House of Representatives on 13th July 2021 and 16th July 2021 respectively, the PIB will now be transmitted to the President for his assent.

The PIB seeks to fundamentally overhaul and restructure the oil and gas industry in Nigeria by creating various regulatory bodies for the industry, recharacterizing the existing licensing regime, as well as changing the fiscal framework in the industry, to mention a few.

This article seeks to highlight the salient provisions of the PIB as passed by both chambers of the National Assembly.

The key provisions of the PIB are set out as follows:

Governance and Administration of the Oil and Gas Industry

1) Powers of the Minister of Petroleum

The powers and functions of the Minister of Petroleum (the Minister) are now specifically and comprehensively delineated in the PIB, unlike the position under the Petroleum Act, 1969. These functions include: the formulation, monitoring and administration of government policies in the petroleum industry; grant of Petroleum Prospecting Licenses (PPL) and Petroleum Mining Leases (PML) upon the recommendation of the Nigerian Upstream Regulatory Commission (the Upstream Commission).

The PIB establishes the Upstream Commission, which will be responsible for the technical and commercial regulation of the upstream segment of the Nigerian petroleum industry.

3) Establishment of the Nigerian Midstream and Downstream Petroleum Regulatory Authority

Essentially, the Authority will regulate both the petroleum segment and the gas segment of the oil and gas industry.

The PIB establishes the Nigerian National Petroleum Company Limited (“NNPC Limited”) to take over the assets, interests and liabilities of the currently existing NNPC. The NNPC Limited will operate as a government-owned private limited liability company registered under the Companies and Allied Matters Act and not as a statutory corporation established under the NNPC Act, such that it will operate under a robust corporate governance regime. As the national oil company, NNPC Limited will act as the concessionaire in all Production Sharing Contracts and Production Sharing and Risk Service Contracts, and will have a right to a share of the natural gas under these arrangements.

The PIB recognises the following licenses and leases in the upstream sector to be issued and further provides for the duration of the licenses as follows: 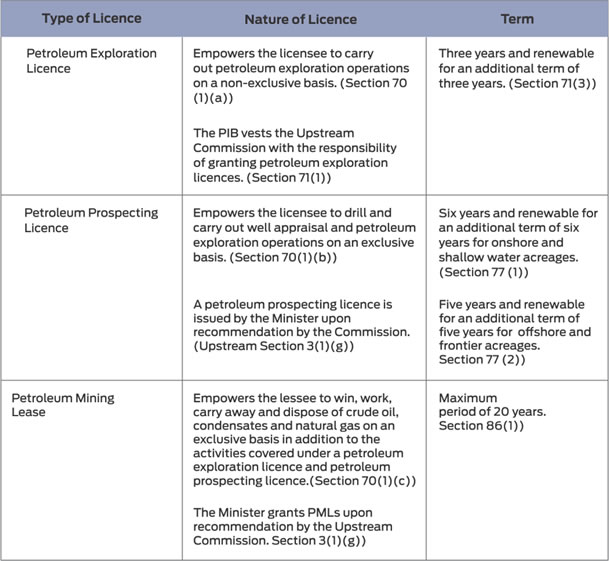 The PIB empowers the Authority to issue licenses for the midstream and downstream petroleum liquid operations. (Section 174(1)). Petroleum liquid operations will include activities such as the supply of petroleum products to retail customers, construction and operation of facilities for upgrading of heavy oil and lubricants. In the same vein, the Authority is also tasked with issuing licences for midstream and downstream gas operations. (Section 125, 129).

The PIB permits holders of existing Oil Prospecting Licence (OPL) or Oil Mining Leases (OML) under the current regime to voluntarily covert them to PPL or PML, respectively. (Section 92(1) ). Upon conversion, such licensees and lessees will start benefitting from the fiscal terms under the PIB. (Section 93(2)).  In the absence of a conversion, the fiscal regime prior to the PIB will continue to apply to the OPL and OML until the termination of the respective OPL or OML. (Section 303(1)).

Gas Sector Considerations in the PIB

The PIB treats natural gas as a stand-alone resource (Part IV), as opposed to treating it as a by-product of oil operation that currently exists in the extant Petroleum Act. Accordingly, the following are the salient gas provisions in the PIB:

The PIB authorizes the Upstream Commission to prescribe and allocate, pursuant to a regulation or guideline, the domestic gas delivery obligation among all lessees before 1st March of each year, based on the domestic gas demand requirements determined or updated by the Authority. (Sections 110(1)(a) and 173(1)).

The PIB establishes the Midstream Gas Infrastructure Fund as a body corporate with a Governing Council, led by the Minister of Petroleum, to make investments in infrastructure related to midstream gas operations. These investments are aimed at the reduction of gas flaring as well as increasing the domestic consumption of natural gas in projects which are partly financed by private investment amongst others.

The Fiscal Regime Under the PIB

However, the fiscal terms will apply upon:
a. conversion of existing OPLs to PPLs and OMLs to PMLs;
b. termination or expiration of unconverted licenses, and
c. renewal of OMLs.

Accordingly, holders of OPLs and OMLs that do not convert to PMLs will continue to be liable to the current Petroleum Profit Tax Act pending the expiration of their licences. (Section 311(9)).

On the other hand, CIT applies to all companies, concessionaires, licensees, lessees, contractors or subcontractors involved in the upstream, midstream or downstream petroleum operations. (Section 302(1)).

The rate of Hydrocarbon Tax and CIT payable are as follows:

The current rate of CIT is as follows:

3) Other Fees and Levies Imposed under the PIB 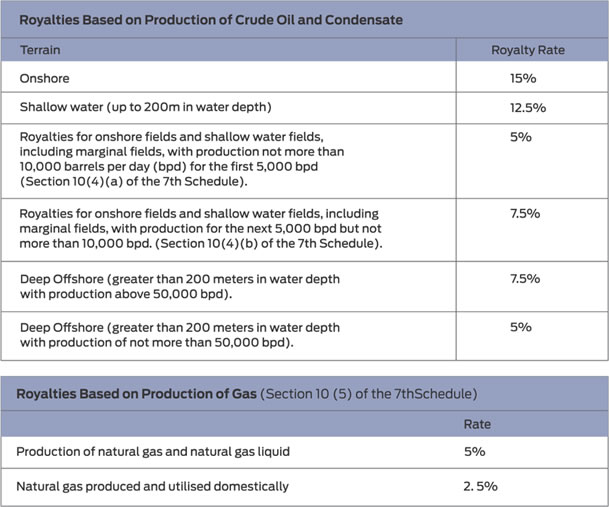 Based on price, the table below sets out the Royalty rates under the PIB (Section 10 (11) of the 7th Schedule).

With oil and gas accounting for around 90% of Nigeria’s export earnings and the Ministry of Petroleum declaring a decade of gas from the year 2020, a more efficient regulatory regime is key to driving growth in Nigeria’s oil and gas resource exploration, development and utilization initiatives. While the deficiencies in the Petroleum Act of 1969 have been addressed over the years using various regulations and guidelines issued by the Minister of Petroleum and other relevant regulatory agencies in the oil and gas sector, investors have always insisted that these changes be incorporated in a more robust and holistic law to be enacted by the National Assembly. This is to create legal certainty and mitigate discretionary changes in the legal and regulatory framework for the oil and gas sector.

The jury is out as to whether the long-awaited enactment of the PIB is the desired push to take Nigeria’s oil and gas industry forward, or if it is a little too late given that the international and investing community is moving away from hydrocarbons and towards net zero emissions. It remains to be seen what impact the PIB will have on Nigeria’s oil and gas sector and the country in general.

Detail Commercial Solicitors is distinct as Nigeria’s first commercial solicitor firm to specialize exclusively in non-courtroom practice. Based in Lagos, Nigeria’s business capital, DETAIL is totally committed to its clients’ business objectives and reputed for dealing with the minutiae. Email: info@detailsolicitors.com.