The ongoing world cup is lot of fun, not just for what is happening on the pitches but also for off-pitch actions. There is a trending TikTok video where two Africans are conversing about the World Cup. One claims that Africa has won the competition. The other asks why it is so when the final match has yet to be played. His colleague starts to mention Africans playing for the major countries at the Mundial. From the lists, this is the largest contingent of persons of African descent at the World Cup at any time. It is not just France. This time, countries like Switzerland and Australia have many Africans in their teams.

France came with as many as 15 players of African descent in a team of 26 players. Germany has over 7 African players in its team. Canada, the United States, and Belgium each has more than 4 Africans in its team. So, for the skit maker, whoever wins, Africa wins.

The skit maker in the video is delighted that Africa is suppling talents to other countries, even as African teams are struggling to qualify out of their groups. France is fancied to win the tournament. If it wins, 15 Africans will be donning the medal. From the state of play, none of the African teams is expected to reach the semi-final stage, not even Senegal, the African champion. This irony is lost on the gleeful Africans eulogizing the large collections of African diaspora players. African teams are not doing quite well. But African players have been outstanding.

Africa has always provided countries like France and Belgium one or two football geniuses every now and then. But nothing is like this, where many European countries have many Africans, sometimes, recent immigrants, donning their national colours. For me, one of the most interesting stories out of the Mundial is that of Breel Donald Embolo who abandoned his native Cameroon to play for Switzerland and scored the goal that may deny Cameroon qualification from its group. After the match, Embolo left his Swiss camp to console his Cameroonian brothers. On social media, many Cameroonians castigated him as a ‘Judas’ for abandoning Cameroon. But his mother came to his defence. As far as she cared, no one should castigate her son. Cameroon should blame herself that the likes of Embolo are not playing for it because of its corruption and mismanagement. 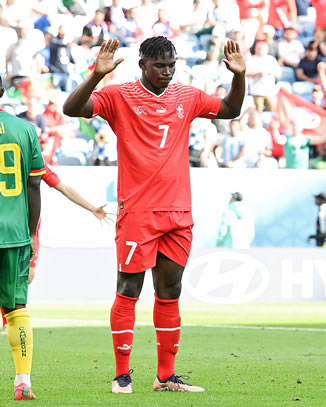 That is the point. Africa is bubbling with talents. But Africa is floundering for lack of competence. One reason is that Africa is not habitable. Its citizens, the best and the brightest, are leaving in droves to habitable places. The previous globalization saw African forced into slavery in Europe and America. In the new globalization, Africans are happily streaming to Europe and America to save their lives.

The African country that donates most Africa players to European teams in this World Cup is the Democratic Republic of Congo, a country that had fallen apart under intense war and violent conflicts. Many of these players left in times of conflicts or were born when their parents escaped from wars. They are now Africa’s ambassadors, restoring hope in the midst of chaos and despair, from safer and distant climes.

There is a perennial expectation of ‘Africa Rising’. It has never happened. We keep expecting breakthrough economic growth from the African continent. Everything that was touted as Africa’s silver lining turned out a disaster. Natural resource was believed to be the catalyst of capital formation that will ultimately result in sustained economic growth. It has not happened. Instead, it has fueled wars and conflicts. Our youthful population is now touted as an advantage in the age of digital economy. It might turn out again that this resource will instead sustain growth in the richer Europe and America.

No picture conveys this tragedy better than the one where the UK Minister of International Trade and the US Assistant Secretary of Treasury for Trade met to discuss US and UK trade relations. Both are of Nigerian origin. And both are very high-profile officials of leading countries in the world. There are many Africans like them heading important policy portfolios of the most advanced nations of the world. With the manner highly-talented African are leaving the continent to live abroad, the much-awaited great future of Africa may actually be in the diaspora. Yes, Africa may still be rising in the hundreds of its citizens doing excellent stuffs for their adopted continents.

This development would have been all good if African countries are turning out right. We expect that brain-drain could, in short time, become brain-gain, as these better skilled and motivated Africans return to lead their countries to greatness. But the hope of ‘brain-drain’ turning to ‘brain-gain’ might still prove to be a mirage. The state of African leadership gives little hope of a turnaround soon. The conflicts and poverty traps combining with the leadership traps damage hope of a rising. The glorious new Africa may actually reside outside Africa.

As we enjoy the skillful displays of young Timothy Weah for his adopted United States, we cannot but note the disgraceful conduct of the senior Weah, the Liberian President, and his wife, the First Lady, who have left important state business to stay in Qatar and wait for the end of every US match to embrace their son.