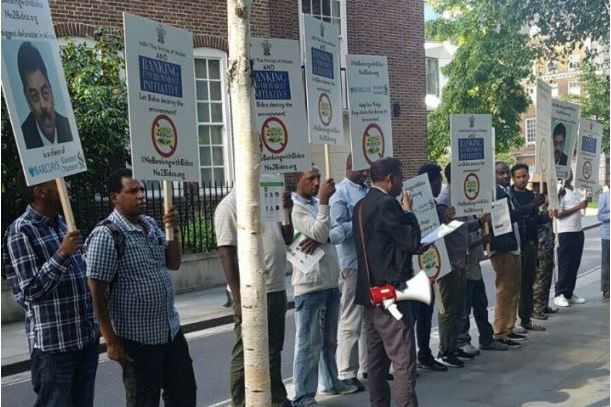 - The Bidco Truth Coalition has called on the Banking Environment Initiative and its patron, Prince Charles, to publically denounce Bidco and other companies that destroy the environment.

East African protesters took to the street of London on Tuesday to demonstrate against Barclays, Standard Chartered and other banks for doing business with Bidco Africa, a Kenya-based multinational consumer goods company. The protesters, under the auspices of the Bidco Truth Coalition (BTC), picketed the banks for financing Bidco, a company that allegedly engages in widespread deforestation as well as human rights and tax violations in Kenya and Tanzania.

Barclays and Standard Chartered are members of the Banking Environment Initiative (BEI), based at Cambridge University’s Institute for Sustainability Leadership, which is under the patronage of The Prince of Wales. The mission of the nine-member initiative is to lead the banking industry in collectively directing capital towards environmentally and socially sustainable economic development.

According to a statement by BTC on Tuesday, by signing up to BEI’s ‘Soft Commodities’ Compact, the nine banks have committed to only direct capital towards sustainable business models and achieve zero net deforestation among their client companies. Under BEI guidelines, member banks must drop clients that don’t measure up to socially and environmentally responsible policies.

The environmental impact of the palm oil project has led activists to call on the UN Global Compact to eject Bidco from its roster of members. In 2004, the World Bank pulled out of Bidco’s Uganda project, citing violations of the World Bank’s anti-deforestation policies.

However, BEI has remained silent, and Barclays, Standard Chartered and other banks continue to do business with Bidco Africa, the advocacy group which is campaigning to end abuses by Bidco said.

The Bidco Truth Coalition has called on BEI and its patron, Prince Charles, to publically denounce Bidco and other companies that destroy the environment.