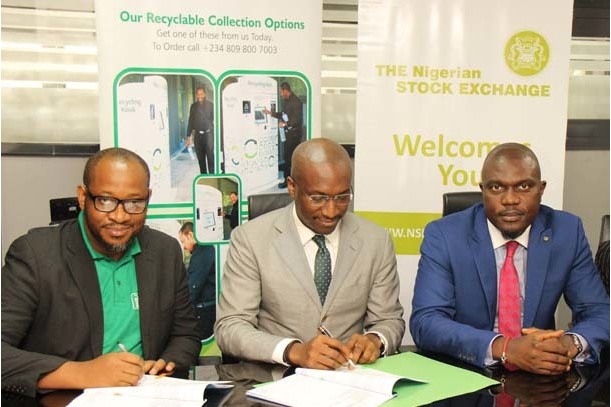 Walaa, a Kenyan mobile financial platform, emerged the grand prize winner of $100,000, while RecyclePoints and Tulaa were runners-up.

0 Comments
L: Mazi Alison Ukonu, Co-Founder and CEO, RecyclePoints with officials of the Nigerian Stock Exchange during the signing of a Memorandum of Understanding for the collection and recycling of waste materials generated at the NSE’s offices earlier in 2018

The Legatum Center for Development and Entrepreneurship at the Massachusetts Institute of Technology (MIT) with support from the Mastercard Foundation has named Nigerian waste recycling and social benefit venture, RecyclePoints, and Kenyan mobile commerce solution, Tulaa, as runners-up for the 2018 Zambezi Prize for Innovation in Financial Inclusion. Each runner-up won $30,000.

Walaa, a Kenyan mobile financial platform, however, emerged the grand prize winner of $100,000. As the Zambezi Prize winner, Wala also won the MIT Inclusive Innovation Challenge (IIC) Africa Prize in the Financial Inclusion category. The startup will join three other winners of the IIC Africa Prize to represent Africa at the IIC global tournament where over $1 million worth of prizes will be awarded.

According to a statement by the Legatum Centre on Thursday, Wala is geared towards consumers operating outside the formal financial system. Using a blockchain system, it enables zero-fee, instant borderless micro-payments. Through the Wala platform, users receive a cryptocurrency wallet and can access transactional banking, remittances, loans and insurance.

“Innovators like Wala and other Zambezi finalists are vital to driving a more inclusive prosperity,” said Georgina Campbell Flatter, the Executive Director of the MIT Legatum Center. “We’re excited to work with them.”

Wala emerged top from the 10 finalists announced earlier in August. The 10 finalists joined leaders from the MIT and African tech ecosystems for the 2018 MIT Open Mic Africa Summit in Strathmore University in Nairobi on Wednesday.  The Summit featured cohort-building, panel discussions, and MIT hackathon exercises.

An additional $5,000 will be awarded to an African entrepreneur, who has demonstrated great leadership in unifying Africa’s tech ecosystem, later in the year.

All 10 finalists will also attend Zambezi boot camp on the MIT campus during the IIC gala in Boston on November 5-9, 2018. The IIC event is part of the MIT Initiative on the Digital Economy; and along with the MIT Legatum Centre’s initiatives, it exemplifies MIT’s global commitment to the future of work.

“We are immensely proud to support the Zambezi Prize,” said Ann Miles, Director Thought-Leadership and Innovation at the Mastercard Foundation. “It shines a bright light on the creativity and talent of Africa’s young people, and the thinking they bring to financial inclusion. This is making real differences in the lives of poor people on the continent.”

The Zambezi Prize and Open Mic Africa tour are pillars of Legatum Centre’s Africa Strategy – a global vision to leverage MIT’s ecosystem to improve lives through principled entrepreneurial leadership – which is also a core component of the MIT-Africa initiative.

“We’re especially grateful to the Zambezi Prize Board, our global ecosystem collaborators, and the 40 African tech leaders who served as Zambezi judges and whose dedication to entrepreneurship and financial inclusion helped us discover this new generation of innovators,” said Ali Diallo, Global Programs Manger at the MIT Legatum Centre.