Investing in scientific research is key to Africa’s food security 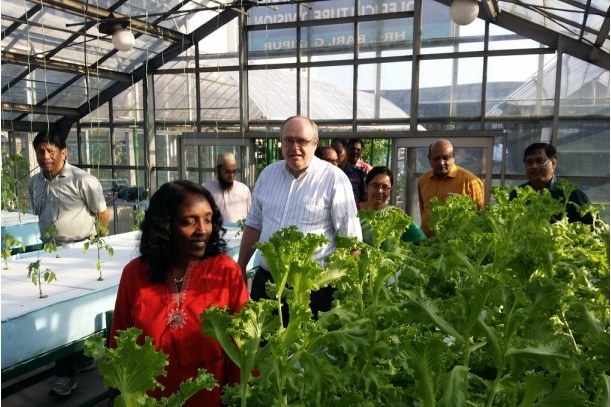 Scientists in universities in Nigeria and other countries in Africa have been contributing tangibly to knowledge and making useful findings. But unfortunately, governments’ responsiveness has not been consistent in financing agricultural research and commercialising useful outputs.

One of the grand challenges of this decade is how to feed the world sustainably and achieve food security as envisaged by the zero-hunger agenda of the Sustainable Development Goals (SDGs). Goal 2 of the SDGs seeks to end hunger and all forms of malnutrition and also to achieve food security by 2030. Given the timeline of this agenda, the world has only ten more years to end hunger, improve nutrition and promote sustainable agriculture.

In 2014, the World Health Organisation (WHO) and United Nations Food and Agriculture Organisation (FAO) said two billion people were suffering from hidden hunger – defined as lack of micronutrients such as vitamins and minerals. The problems of hunger and malnutrition are most acute in developing countries, particularly in sub-Saharan Africa (SSA). A recent forecast by the World Food Programme (WFP) shows that significant humanitarian response will be required to address escalating hunger needs in the region in the first half of this year. The forecast is an ill omen for the year and a new decade that demands critical attention.

This hunger and malnutrition crisis calls for global but, more importantly, regional commitment to research efforts that will help address food security challenges. For instance, in SSA, more efforts should be geared towards supporting region-appropriate research that will inform policy decisions to boost food security.

More than ever before, we need major interventions from the scientific community to transform current patterns of food production, distribution, storage and consumption. And the first line of action is for governments in Africa to recognise the essential role of research targeting hunger and malnutrition hotspots in the region.

Food insecurity is, oftentimes, the fallout of various factors such as climate change, poor food production systems, inefficient use of scarce resources, uncontrolled food loss and waste, among other factors. In order to establish climate-resilient agricultural practices, sustainable food production systems, efficient use of resources like water, land, soil nutrients and sunlight, and cost-effective interventions to limit food loss and waste in the supply chain, African and other developing countries need to engage the scientific community.

As the gap between potential and actual crop yields widens in many regions globally, threatening food security, farmers would need to produce more food using less energy, less land, less water, less fertilizer and pesticides and, practically, less of all that is required to produce food – crops, livestock, poultry, fish, etc. By all means, new technologies and improved practices are a necessity.

In the last decade, modern farming techniques such as hydroponics, aquaponics, aeroponics and so on were introduced as products of research to produce more food using less land and water. While most of these methods are still unpopular in developing countries, new scientific interventions are springing up. It is imperative for African countries to adopt these innovations and join the food security race.

A new study, published in November 2019 in the journal, Nature, shows how scientists have made a discovery to boost crop yield and meet urgent food security needs by redesigning photosynthesis. Photosynthesis is simply a process through which green plants utilize energy from sunlight, carbon dioxide and water to produce nutrients (their own food) required for growth and other processes, thereby making food available for humans and other animals.

The researchers, led by scientists at the University of Sheffield, South Yorkshire, England, found that this very important process of photosynthesis is inefficient. About 75 per cent of sunlight that is available for crops is lost because either some parts of plants lack the green pigmentation (chlorophyll) that absorbs sunlight to power photosynthesis, or the sunlight is reflected and lost as heat.

The scientists found that another 20 per cent of the sunlight energy is lost due to other inefficiencies in plant metabolism. Consequently, only 5 per cent of sunlight is utilized to produce crops. The research then sought to use genetic engineering to help crop plants optimize photosynthesis and achieve a resultant increase in crop yield.

Another recent ground-breaking research offers hope for global food security in a changing climate by improving the yield of wheat. As published in the journal, Global Food Security, the scientists at Rothamsted Research in the United Kingdom found that the yield of wheat, which has become a major staple food globally, can be increased by as much as 5.2 tonnes per hectare, compared to current yields of the typical wheat varieties. The research suggests that the crop is yet to attain its full genetic potential, which can be achieved by fine-tuning its genetic makeup to the environment.

Interventions of this kind are required not just to improve the yield potential of wheat but also the yield of other staple crops direly needed to feed a global population of 9 billion people by 2050. Such interventions, which require the collection and use of data on the contributions of genes to different traits in crops, need to be mapped and targeted based on the prevailing situation in each region. For instance, due to the fact that certain food crops are typically grown in Africa and consumed by Africans at home and abroad, the domestic science community needs to be fully engaged to provide solutions to the imminent food security challenge.

Indeed, scientists across the globe are making giant strides towards improved food production. Last summer, a team of scientists led by the United States’ Department of Energy’s Oak Ridge National Laboratory in Tennessee, made a discovery that could lead to the development of food crops that can withstand harsh growing conditions, resist pest and pathogen attacks and use less fertilizer to increase harvests per acre.

Their research was able to identify a specific protein that controls the symbiotic relationship between plants and beneficial soil fungi. They explored the age-old ability of plants to spread through an established relationship between the plants and a beneficial fungus attached to plant roots. Previous knowledge showed that when a plant is united with the fungus, it forms a sheath around the plant’s roots, extending far from it, thereby increasing nutrient uptake. The fungus also sends warning signals that prevent the spread of pathogens and pests from other plants. The host plant, in return, provides carbon needed by the fungus for growth.

Interestingly, the protein discovered by the researchers as the trigger for this symbiotic relationship between plants and soil fungi can also be expressed in crops that are not natural hosts to this important relationship. The ability to do this will make it possible to confer same benefits on food crops, thereby minimising losses in crop yields due to pests and diseases and unfavourable growth conditions. Approaches of this nature will significantly help in the development of climate-resilient crop varieties.

Our challenge is not only to make more food available. We also have to ensure that these foods are rich in nutrients to combat malnutrition, especially in children and women of child-bearing age. Research efforts in the last decade by scientists at the National Root Crops Research Institute (NRCRI) and the International Institute for Tropical Agriculture (IITA), both in Nigeria, brought about the development of vitamin A cassava varieties, which contain higher amounts of beta-carotene, making it six times more nutritious than the common white-fleshed cassava.

Stronger political will and continuous support are required to ensure that products of such scientific interventions are available and affordable for all, especially in food-insecure rural and urban communities in Nigeria and other countries in sub-Saharan Africa this decade.

The feats achieved thus far by developed countries, as discussed earlier, through science and multidisciplinary research couldn’t have happened without funding and supportive government policies. Scientists in universities in Nigeria and other countries in Africa have been contributing tangibly to knowledge and making useful findings. But unfortunately, governments’ responsiveness has not been consistent in financing agricultural research and commercialising useful outputs. In some cases, political will is completely absent.

For the African scientific community to effectively lead game-changing investigations in food security, there is an urgent need for heavy investment in research infrastructure. Science is not cheap. Political decision-makers must make more funding available for agriculture and nutrition research, and strengthen monitoring and evaluation strategies locally.

When governments engage the intellectual community to full capacity, widespread suffering caused by food insecurity on the continent will be significantly reduced. Global and in-country knowledge systems must, however, ensure that interventions to provide adequate food and nutrition for everyone do not cross critical environmental thresholds to uphold sustainability. Scientific communities should strengthen common platforms at global, regional and national levels to achieve the common goal of food security.