How indigenous foods can combat malnutrition in Africa 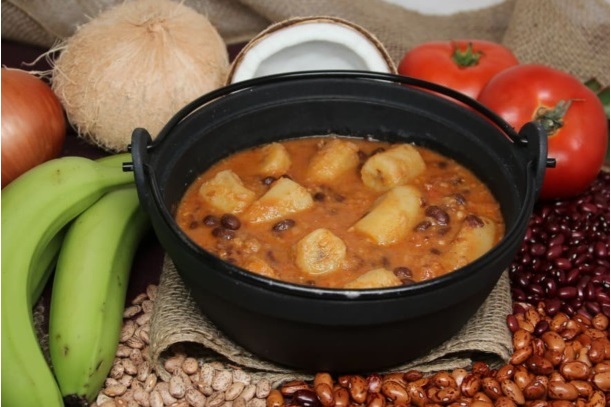 Supporting the profitability of local agriculture is essential in diversifying African economies and fostering growth .

The label given to African foods as being mostly ‘starchy’ and ‘non-nutritious’ is misleading and pejorative. African cuisines are in fact nutrient-rich and can fight malnutrition when rightly combined. In most parts of the continent, meals usually have a combination of two or more of the following categories of foods: whole grains, plant-based protein – especially beans, meat, fish, fresh fruits and vegetables.

Whole grains, which are the seeds of grass-like plants, include corn, rice, millet and wheat. When taken in the right proportion, whole grains nourish the body with important nutrients like fiber, vitamins, particularly B vitamins, and other plant compounds that play vital roles in disease prevention and support for growth. Plant-based proteins are also good sources of fiber. They also contain lower calories and fat when compared to animal proteins.

A typical African traditional food is properly cooked and well-seasoned with spices and salt. Spices such as turmeric, black pepper, basil, ginger, garlic, clove, mustard, nutmeg, and so on, have additional health and nutritional benefits that make traditional African cuisines the healthiest meals around the world.

Thus, it is the high level of poverty, and not the absence of healthy foods, that is a major cause of the high number of undernourished people on the continent, particularly in sub-Saharan Africa (SSA). The SSA region had about 234.7 million malnourished people in 2018, according to the World Hunger Index.

Malnutrition, as defined by the United Nations Food and Agriculture Organization (FAO) and the World Health Organization (WHO), refers to deficiencies, excesses or imbalances in essential nutrients, such as minerals and vitamins that the body needs. In other words, malnutrition entails both undernutrition (underweight, wasting, stunting) and being overweight. These conditions can result to various chronic diseases.

Children’s health and survival are threatened more aggressively by poor nutrition. A 2020 global report by WHO states that 47 million children under the age of five suffer from wasting (a condition in which a child’s weight is too low for his or her height), 14.3 million are severely wasted and 144 million children are stunted (referring to when a child is too short for his or her age or is not growing well). The report also says 38.3 million children are either overweight or obese. Asia and Africa constitute the highest percentage of these figures.

For people who can afford healthy foods but refuse to consume them, the craving for sugar and the consumption of junk foods fueled by the everyday hustle and bustle of city life are the culprits of malnutrition. Malnutrition can also be linked to the notion that people who can afford to buy processed foods such as burger, hot dog, ice cream, shawarma, pizza, candy, among others are the “rich and classy people.” Generally, junk foods are quicker to get and time-saving, compared to indigenous foods that require some cooking for them to be ready.

From the foregoing, junk foods are not consumed necessarily for their nutritional value. In any case, they are usually dense in calories given the high sugar content and harmful to health when consumed on a regular basis. Eating cooked food eliminates the risk of ingesting food pathogens and can prevent food poisoning.

Indeed, there are some fruits and vegetables that are eaten in their raw forms like carrot, apple, cabbage, cucumber and so on. For such foods, their essential vitamins could be lost when cooked. But generally, cooking food enhances the taste and makes it easier for the body to absorb the nutrients. Research has shown that certain nutrients in foods, especially antioxidants, are better accessible after boiling or steaming.

One of the investigations we conducted at the Nutritional and Industrial Biochemistry laboratories in the research group of Dr. Charles Olaiya of the University of Ibadan, Nigeria, and published in the Pertanika Journal of Tropical Agricultural Science in 2018, showed that cooking enhances the antioxidant activity of eggplant, popularly called garden egg. Our research also showed that cooking improves the ability of this food crop to inhibit the effects of enzymes whose presence have been linked to diabetes mellitus.

Several other researchers have demonstrated that lycopene and higher content of fat-soluble vitamins such as beta-carotene (a precursor for vitamin A), alpha-tocopherol (vitamin E), among other nutrients contained in tomatoes, sweet potatoes, squash, etc., are better accessible after cooking. These nutrients have been shown to be very useful in the prevention of several cancers and they are also capable of reducing the incidence of cardiovascular diseases.

Another benefit of consuming African cuisines is the need to control the intake of salt. Processed foods such as chips, bacon, sausage, etc., often contain high amount of salt and flavour enhancers, which have serious negative health effects. High intake of salt can increase blood pressure, and some studies have linked excessive salt intake to cognitive decline.

For children, the consumption of junk foods should be discouraged as it can become addictive, further limiting their desire to eat healthy, homemade foods. In poor communities where people can barely afford three square meals, it is important for governments – through community health centres, media, and with the support of non-governmental organisations – to educate the public on healthy eating. This would include encouraging people to consume the right combination of locally available foods, including fruits and vegetables that are cheaply available in different seasons.

Dietary guides for different age groups of children and adults should be developed locally. Such guides should put into consideration the nutritional needs at different stages of life and the financial capacity of people in different regions. They should also suggest seasonal foods that are readily available at affordable prices and their correct combinations should be recommended.

People in urban areas should not be left out. Both rural and urban dwellers need to be guided on proportions and nutrient requirements, depending on age, health condition, gender and culture. These factors play important roles in influencing dietary choices.

As a person grows older, certain dietary modifications are required. For example, the intake of fewer calories to maintain healthy weight and the consumption of more fiber and vitamins are advised. People living with certain health conditions or diseases are often advised to be selective in their food choices, which might not be applicable to healthy people. Moreover, the dietary needs of men sometimes vary from those of women, especially in terms of proportions and what to have or not have at certain periods.

Pregnant women, for instance, need to eat foods rich in iron to avoid becoming anemic. They need calcium, protein and folate in addition to energy-boosting foods for proper fetal development. The right proportions of these nutrients should be well communicated as anything in excess can be dangerous.

Economically, prioritizing the buying and eating of local foods is advantageous. African food crops are mostly grown in local communities. So, purchasing them, as opposed to imported and processed foods, will help farmers and other local producers to thrive. As farmers flourish, more young people will be encouraged to engage in agribusiness. Supporting the profitability of local agriculture is very essential in the move by governments to diversify African economies and foster growth and development.

Encouraging the production, availability and consumption of indigenous foods by the young and old would help in combating malnutrition in Sub-Saharan Africa and growing the economies in the sub-continent.