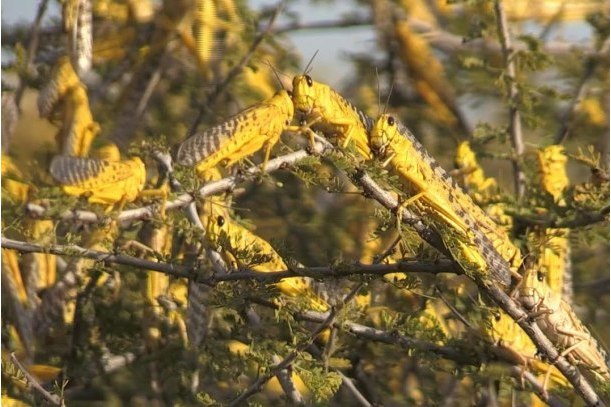 Based on my experience developing a plant-based biopesticide for the control of weevils that attack cowpea, maize and rice kept in storage, biopesticides work best as preventive agents as less quantities are required, compared to when used as control agents.

The desert locust outbreak that has been on rampage since last year in some countries in East Africa, Arabian Peninsula and South Asia can spread to thirty countries across Africa, Asia and the Middle East if breeding conditions for the highly-destructive pest remain favourable, according to the United Nations Food and Agriculture Organisation (FAO). As of February 12, swarms of locusts were seen in Djibouti, Eritrea, South Sudan, Uganda and Tanzania. Towards the end of last month, widespread breeding was already in progress in Ethiopia, Kenya and Somalia.

Considered the world’s most dangerous and destructive migratory pest, the insect feeds voraciously on corn, sorghum, cowpea, millet, and animal fodder. Based on estimates by the United States Department of Agriculture (USDA), a one square kilometre (km2) swarm consisting of approximately 40 million locusts, can consume the quantity of food that should feed 35,000 people in a day if each person eats an average of 2.3 kilogrammme (kg) of food per day.

Unfortunately, the worst of this outbreak may be on the way as rainy season approaches, enabling the breeding of more generations of locusts. Over 13 million people in Djibouti, Ethiopia, Eritrea, Kenya and Somalia have already been affected by acute food insecurity. The FAO has said about 20 million are currently at risk, as hundreds of thousands of hectares, including cropland and pasture, have been affected by the plague.

The growing insect infestation has been attributed to a confluence of changing and some unusual weather events, including heavy rainfall, floods, rising temperatures, droughts and cyclones in the last couple of years. Current efforts to limit the release of greenhouse gases (GHGs), which are largely responsible for global warming and climate change, may not eliminate the impact of the GHGs already released into the atmosphere by previous human activity. Therefore, we would need to prepare for more of such outbreaks while hoping there would be more collective actions by policymakers and businesses to reduce GHG emissions.

Aside from the current locust plague, the likelihoods of other crop pest and disease outbreaks on the continent are on the increase. It is, therefore, highly recommended that monitoring and control strategies in areas prone to such outbreaks should be strengthened.

This is not the first outbreak. There has been a series of outbreaks of pests and diseases in different locations and at different times in recent years. In 2016, for example, the outbreak of a moth, called Tuta absoluta, in the Northern part of Nigeria caused the declaration of a state of emergency. Nicknamed ‘tomato ebola, the insect destroyed 80 per cent of tomato fields in the region.

Starting in the same year and into 2017, the outbreak of the fall armyworm (FAW) was reported in many African countries, including some parts of Nigeria, South Africa, Togo, Uganda, Malawi, Mozambique, Zimbabwe, Zambia, Ethiopia, and several others. The pest destroyed food crops, including millet, wheat, maize and rice.

Overall, this latest episode of locust outbreak seems to be the worst and most challenging to control because other factors like civil unrest and conflicts in Yemen and Somalia hindered early interventions and allowed the insects to breed freely and spread to other areas. The increased occurrence of pests and diseases attacking crops is a pointer for governments in Africa to establish stronger pest and disease response strategies. Preparing for future outbreaks is a task for countries that have been affected and those that have not. It is not a time to relax.

Having effective pest and disease monitoring techniques – in light of changing weather conditions – can help in predicting outbreaks. This can be instrumental in curbing the spread and eliminating the pests and diseases in real time. At the heart of such interventions is the need to set up and improve the capacity of research and innovation arms of agricultural agencies and related institutions.

It is time for African countries to take charge of the situations that fuel food insecurity on the continent. Africa should not only depend on the goodwill of the international community to solve its challenges, particularly those that affect food supply. The world is tending towards a time when there are multiple crises in different parts of the world in the same period. There is also growing nationalism around the world, led by right-wing politicians who do not strongly support international efforts to address global issues. In such scenarios, domestic or regional crises threatening food security would have to first be addressed as promptly as possible from within. And for this reason, Africa must be prepared.

Another school of thought on the locust outbreak suggests the insects, since they are edible, could be collected as food and harvested for commercial purpose. In doing so, the swarms of locusts would no longer be seen as a problem. This reasoning is impractical, given the nature of desert locusts and the speed at which they are invading territories, aided by variable weather patterns. National Geographic estimates that the insects increased by roughly 8,000-fold in just nine months across the Arabian desert. Under the right conditions, eggs laid by the adult insects can hatch to form a new generation that is up to 20 times larger than the previous one. Therefore, harvesting them for food would not eliminate them quickly enough.

That is why aircrafts are being used to spray insecticides on the population to achieve quick results. And eating the insects that have been sprayed with toxic chemicals would constitute serious health risks.

Ordinarily, we should be concerned about the consequences of the current approach of controlling the outbreak through the aerial release of chemicals. Even if the insects are not being collected and eaten, the chemicals are still potentially harmful to people, especially children, living in affected areas. However, the aerial approach seems to be the most feasible control strategy, according to the FAO.

Controlling the locust outbreak is certainly not an easy task and may take months. Preventive control strategies have been proposed in the past to limit the infestation. The outbreak of other insect pests in the future can also be checked by preventing them from even occurring in the first place. Resources can be channelled towards establishing monitoring stations to gather data about specific insect pests, weather and ecological conditions that favour their breeding.

Perhaps a preventive measure, which would preclude the use of toxic insecticides, could entail the use of health- and environment-friendly alternatives known as biopesticides. These are pesticides developed from biological agents like certain microbes and plants. The first large-scale use of a biopesticide against locusts was reported in 2009. The pesticide was made from fungal spores. It was able to contain the outbreak of locusts in Tanzania that year. This biopesticide, called Green Muscle, was commercially released in 2000 and has been reported to have been used in other countries like Madagascar, Senegal, Niger and Sudan.

Based on my experience developing a plant-based biopesticide for the control of weevils that attack cowpea, maize and rice kept in storage, biopesticides work best as preventive agents as less quantities are required, compared to when used as control agents. And their protective capacity extends for very long periods of time. Besides, applying lesser quantities at a stage when their effects would be significant in preventing pests can remarkably reduce cost. The use of biopesticides as preventive alternatives, rather than for controlling outbreaks, was buttressed with Green Muscle.

The need to develop capacity to control pest and disease outbreaks, and also promote strategies to forecast future outbreaks in Africa, cannot be overemphasised. The region’s ability to feed itself would underpin its development.