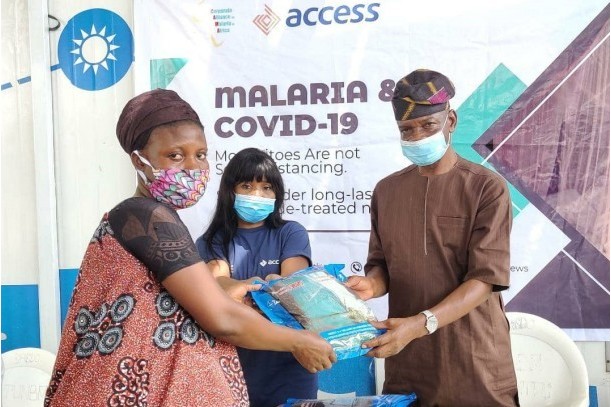 As part of its many health system interventions, Access Bank, Africa’s largest bank by customer base, held a Malaria Intervention Programme last month in five communities across three south-western Nigerian states of Oyo, Ogun and Lagos. The aim of the outreach programme was to raise awareness on malaria prevention and treatment in pregnant women and children under five years of age. According to the World Health Organisation (WHO), these demographics constitute the most vulnerable groups affected by the endemic disease.

Much still remains to be done to reduce the high burden of malaria in Nigeria, the highest malaria burden country in the world. Per WHO data, Nigeria accounted for 25 per cent (or 57 million) of the estimated 228 million cases of malaria that occurred worldwide in 2018. The country accounted for almost 24 per cent of all global malaria deaths, estimated at 405,000 two years ago. While the disease kills about nine persons every hour in Nigeria, malaria is a leading cause of miscarriages during pregnancy; it is also a major cause of maternal and child mortality. Pregnant women who are exposed to malaria infection also deliver children with low birth weight (LBW) – a term that describes babies who are born weighing less than 2,500 grammes.

Access Bank partnered with the Corporate Alliance on Malaria in Africa (CAMA), a GBCHealth-led initiative driving partnerships for malaria control and elimination, to carry out the outreach programme on June 4. According to the bank, the anti-malaria campaign reached over 5,000 pregnant women across the three states. These included mothers with children under the age of five. About 1,600 pregnant women were provided long-lasting insecticidal nets (LLINs) in Ogooluwa, Eredo and Iberekodo communities in Lagos State, Aremo and Oke-Ado communities in Oyo State and Ibafo community in Ogun State. Health centres in these communities also received LLINs.

The beneficiaries were encouraged to use the insecticide-treated nets and avoid self-medication when they are unwell. They were also encouraged to maintain clean environments and proper hygiene. In addition to the awareness on malaria prevention, the beneficiaries were also informed about COVID-19 hygiene, which involves regular washing of hands, maintaining physical distance, coughing and sneezing into the elbow and reporting to a hospital when they are sick.

The Access Bank anti-malaria campaign is in alignment with Nigeria's National Malaria Elimination Programme (NMEP), which is under the Federal Ministry of Health. The NMEP is a body responsible for facilitating policy and guidelines and coordinating the activities of stakeholders on malaria control across the country.

Apart from the door-to-door awareness campaign, Access Bank and CAMA also took the outreach to social media. Over 200,000 people were reached through the online campaign, according to Access Bank’s report on the outcome of the programme.

Ms. Victor-Laniyan, Access Bank’s Head of Sustainability, who is also CAMA’s Co-chair, emphasized the importance of strong cross-sector collaborations in the fight against malaria, even during COVID19. According to her, malaria and COVID-19 co-morbidity could have grave consequences.