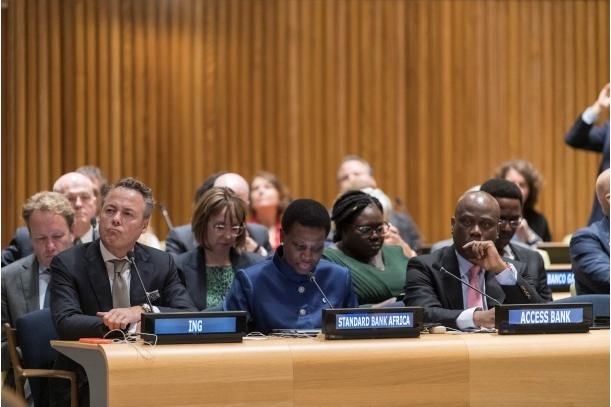 The Principles mark the beginning of the most significant partnership between the global banking industry and the UN.

Access Bank Plc, alongside a core group of 30 founding banks, were joined by 100 other global banks to launch the Principles for Responsible Banking (PRBs) on September 22, 2019, during the annual United Nations General Assembly in New York. More than 45 CEOs together with the UN Secretary-General, António Guterres, attended the launch ceremony. The PRBs were developed to enable banks align their business with the goals of the Paris Agreement on climate change and the Sustainable Development Goals (SDGs), and substantially scale up their contributions to the achievement of both frameworks.

The United Nations Environment Programme (UNEP), which developed the PRBs along with 30 banks, said there are three main challenges that will hold humanity back from delivering a brighter future for all. They are climate change, ecosystem and biodiversity loss, and the pollution of land, air and sea. All these challenges have far-reaching implications due to their effects on weather conditions, food security, and the health and well-being of all humans living today, and in the future.

The Paris Agreement and the SDGs are both urgent calls for actions to be taken by all countries and businesses. Specifically, the Paris Agreement sets a goal of limiting increase in global average temperatures to below 2 degrees Celsius (°C) or 3.6 degrees Fahrenheit (°F) above pre-industrial levels by the end of the century – and to pursue efforts to limit the temperature increase even further to 1.5°C. The SDGs – also called the 2030 Agenda for Sustainable Development – provide a blueprint for shared peace and prosperity for people and the planet, now and into the future.

While action on climate change is growing, it is still a far cry from what is needed to meet the 1.5°C target of the Paris Agreement. Meanwhile, carbon sinks, including forests, are disappearing the world over; biodiversity is in decline at alarming rates. In fact, the UN says "climate change is the defining issue of our time."

Hunger and diseases are still intractable challenges, especially in Africa. Inequality between and within countries remains a major challenge. The third edition of the Goalkeepers 2019 Report, recently released by the Bill & Melinda Gates Foundation, says inequality is a hindrance to progress on SDGs. The report argues that whereas every person should have an equal opportunity to lead a healthy, productive life; it is not the case in reality.

Indeed, global political and business leaders have emphasised the importance of building coalitions in order to address the world’s social and environmental challenges. This becomes even more imperative because of the colossal amount of funding that is required to achieve the targets of the Paris Agreement and the SDGs. According to Christiana Figueres, former Executive Secretary of the UN Framework Convention on Climate Change, an additional investment of at least $60 trillion is required from now until 2050 to make the transition to low-carbon and climate-resilient economies.

Strong global partnership is required to mobilise the required resources from governments, civil society, the private sector, the UN and other multilateral organisations. For this reason, SDG 17 urges business leaders to cooperate with governments and civil society to deliver on sustainable development targets. The development of the PRBs is a good example of SDG 17 at play. The launch of the Principles marks the beginning of the most significant partnership to date between the global banking industry and the UN.

“The UN Principles for Responsible Banking are a guide for the global banking industry to respond to, drive and benefit from a sustainable development economy,” said UN Secretary-General, Antonio Guterres. “The Principles create the accountability that can realize responsibility, and the ambition that can drive action.”

The PRBs are significant partly because the banking sector reportedly provides over 90 percent of the financing in developing countries, and over two thirds worldwide. The 130 banks that became signatories to the PRBs last month are from 49 countries, and they have combined total assets of more than $47 trillion, which accounts for a third of the global banking sector.

By signing up to the Principles, the banks have shown that they are committed to a common framework that guides the role of the banking industry in supporting the economic and social transformation of society, and reduces the industry’s risks. Accordingly, the Principles provide a roadmap for a transformation to a sustainable banking industry. Inger Andersen, Executive Director of UNEP urged financial institutions at the launch of the PRBs to adopt adequate risk management planning.

She said. “A banking industry that plans for the risks associated with climate change and other environmental challenges can not only drive the transition to low-carbon and climate-resilient economies, it can also benefit from it. When the financial system shifts its capital away from resource-hungry, brown investments to those that back nature as solution, everybody wins in the long-term.”

The launch of the PRBs also indicate the growing interest in sustainable investing in the banking sector. The UN Principles for Responsible Investment (PRI) are enabling sustainability factors to be embedded into finance. As of April 2019, the global PRI market size – or financial assets that have been backed by PRI – was over $80 trillion.

Herbert Wigwe, Group Managing Director of Access Bank Plc, stressed the need for continued collaboration and having a long-term approach to sustainability. He said the PRBs underscore the benefits of sustainable banking and the positive effect it has on society. By being among the 30 founding banks that came together to establish the PRBs under United Nations Environment Programme – Finance Initiative (UNEP FI), Access Bank has continued to demonstrate its leadership in sustainability.

And by signing up to the Principles, Access Bank said it is further evidence that it places sustainability at the core of its corporate strategy and philosophy. It also demonstrates the bank’s commitment towards accelerating positive changes in both local and international economies, as it promotes products and services that enhance lifestyles necessary to achieve shared prosperity for both current and future generations.

“There is a greater need now, more than ever, to promote sustainability in the global financial sector,” said Wigwe. “This is, therefore, the right time to launch the Global Principles for Responsible Banking. At Access Bank, we are committed to setting standards and engendering innovative solutions that address social, economic and environmental challenges. We believe that the Sustainable Development Goals will be better achieved if we can work together, using these Principles as a guide.”

Prior to the launch of the PRBs at the UN General Assembly last month, Access Bank hosted the UNEP FI Regional Consultative Forum on April 29-30. The two-day event brought together sustainability thought leaders across the continent at the first-ever sustainability summit to be held in Nigeria. The event was organised to gather stakeholder feedback from Africa during the six-month global public consultation period that preceded the global launch of the PRBs in New York. Apart from facilitating awareness on sustainability, the event provided an opportunity to extract the commitment of the financial sector in Nigeria and Africa to adopt the Principles.

Access Bank said the PRBs will provide the bank with an effective framework for systematically identifying and seizing new business opportunities created by the emerging sustainable investing market, while also identifying and addressing related risks.