The promises and perils of the 2020 budget While government’s priorities as contained in the 2020 budget are laudable, it is doubtful if the set targets will be achieved. An aggressive drive to increase domestic revenues will reduce disposable income, increase cost of goods and services and push up general price levels.

The 2020 budget, given its slogan and priorities, is intended to sustain economic growth and create jobs. For these reasons, several positives are immediately obvious when compared to previous annual budgets. Some of the positive attributes are discussed below.

Continued high allocation to capital expenditures: Development fund for capital expenditure was budgeted at N2.46 trillion. Some of the key capital spending allocations in the 2020 budget include: works and housing, power, transportation, agriculture and rural development, water resources, education, health, and industry, trade and investment.

Note, however, that budgeted recurrent (non-debt) expenditure increased significantly from N4.4 trillion in 2019 to N4.84 trillion in 2020. The increase is attributable to N3.6 trillion allocated for personnel and pension costs, an increase of N620.28 billion over 2019. This reflects the increases in salaries and pensions, including provisions for the new minimum wage and improved remuneration for members of the armed forces.

Budget cycle: The most encouraging change in the 2020 budget, compared to the budgets of prior years is two-fold. First, there was the eight-week turnaround time between the presentation of the 2020 budget proposal by the President to the National Assembly and when it was signed into law. This all took place before the end of 2019. Second, the reversion to a January – December budget cycle.

From the table below, it can be seen that previous years’ annual budgets had remained outstanding for many months into the new year, often as a result of disagreements between the executive and legislative arms of government. This resulted in delays in making critical investment decisions or commencing/funding critical capital projects. 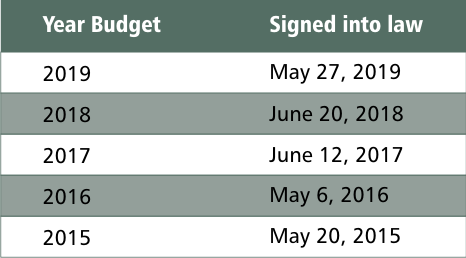 Notwithstanding the good intentions and positives described, the budget includes a number of policy and target inconsistencies.

Inflation targeting: Inflation rates have been in the double digits since February 2016 and have hovered between 11.23 per cent and 11.85 per cent for 18 months. Indeed, it has been on a consistently upward trajectory since August 2019. 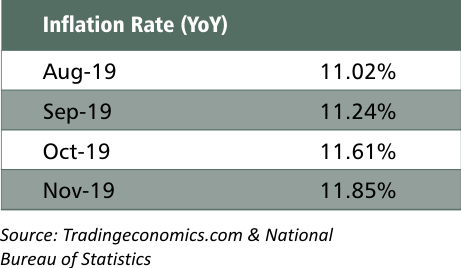 The 2020 budget has an inflation rate target of 10.81 per cent. However, given the continued land border closure that is driving up food inflation, implementation of the new minimum wage, and anticipated tax rises, inflation is expected to continue its upward trajectory, exceeding or at least nudging towards 12 per cent by end of Q1 2020.

Increased tax burden on companies and individuals: The Finance Bill 2019 is expected to be signed into law early in 2020. When this happens, the legislations governing VAT, CIT, Capital Gains Tax, Stamp Duties, Personal Income Tax, Customs & Excise Tariffs, and Petroleum Profit Tax will all be amended to allow for increased tax revenues. The expected revenue increase is pivotal to government’s revenue generation drive. While the impact of amending these legislations on job creation, inflation, and growth projections are outside the scope of this article, that of VAT will be briefly highlighted.

The 2020 budget anticipates full implementation of the proposed increase in VAT rate from 5 per cent to 7.5 per cent. VAT is a consumption tax, which is based on the increase in the value of a product or service at each stage of manufacturing or distribution. VAT is collected by the retailer and the 50 per cent increase in the current rate will have a significant impact on the prices of non-VAT-exempt goods and services, which in turn will exacerbate the inflation rate.

In March 2019, PWC Nigeria reported that on average, the Federal Inland Revenue Service (FIRS) had, in the last six years, raised approximately N900 billion per annum from VAT collections. Therefore, increasing the rate by 50 per cent will only generate an additional N450 billion annually, to be shared by all tiers of government (15 per cent to the Federal Government, 50 per cent to States and 35 per cent to Local Governments net of 4 per cent cost of collection to FIRS).

As a result, while increasing VAT will increase government's revenue, the impact on government’s coffers will be marginal. Nevertheless, the tax drive will hurt private businesses through reduced propensity for consumers to spend and increases in general price levels. In addition, as prices of goods and services go up, manufacturers and other service providers will pass the additional 2.5 per cent VAT increase to the final consumers. According to Taiwo Oyedele, Tax Partner at PwC Nigeria, "contemplating an increase in VAT rate now is bad timing and inconsistent with current economic reality... VAT increase will lead to higher inflation, interest rate hike, more unemployment and generally make people poorer."

According to the current data from the Debt Management Office (DMO), Nigeria’s total public debt portfolio as at June 30, 2019 was US$83.88 billion with foreign debts making up 32.38 per cent of the total and domestic debts accounting for 67.67 per cent. The debt stock has been steadily rising. It rose by US$2.6 billion between March and June 2019. 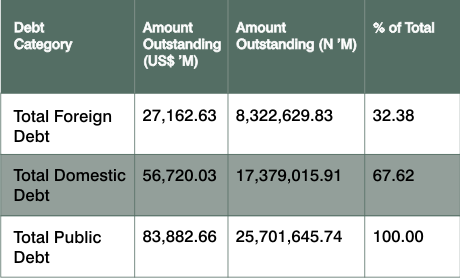 The implications of more deficit financing include a rise in budgeted debt servicing from N2.14 trillion in 2019 to circa N2.73 trillion in 2020. It also entails further deterioration of the debt-service-to-GDP and deficit-to-GDP ratios. Perhaps more relevant is the crowding out of the private sector as a result of increased government demand for loanable funds, which leads to rising interest rates and a stifling of private sector businesses and investments.

Exchange rate and reserves management: The 2019 budgeted oil production target was 2.18 million barrels per day (bpd). However, since January 2018, daily oil production has been below this projection, with the highest daily production of 2.02 million bpd achieved in March 2019.

In November 2019, quoting Roland Onoriode Ewubare, Chief Operating Officer (Upstream) of the Nigeria National Petroleum Corporation (NNPC), Reuters reported that Nigeria’s oil production for November was between 1.6 and 1.7 million bpd. As a member of the Organisation of the Petroleum Exporting Countries (OPEC), Nigeria’s production quota remains at 1.7 million barrels per day. Unless there are plans to carry out major turnaround maintenance of the country’s refineries and make about 600,000 bpd available for domestic refining, the budgeted 2.3 million bpd is unlikely to be achieved.

In addition, data released by the National Bureau of Statistics (NBS) in December 2019, revealed that Nigeria’s biggest export is crude oil at circa 71 per cent of all exports, while the country’s biggest import is petrol, which accounts for approximately 10 per cent of all imports. Given the highlighted scenarios, coupled with increased debt servicing, and the subsidy regime on imported petrol, the Central Bank of Nigeria (CBN) will only achieve the budgeted N305/US$1 exchange rate if it is able to sustain the regular dollar supply to the market at the expense of accretion to the foreign reserves.

While government’s priorities as contained in the 2020 budget are laudable, it is doubtful if the set targets will be achieved. An aggressive drive to increase domestic revenues will reduce disposable income, increase cost of goods and services and push up general price levels. Increased fiscal deficit will exacerbate the crowding out of the private sector, increase interest rates and worsen unemployment. In the absence of major and consistent economic policies to stimulate domestic production, investments, employment and exports, achieving the projected real GDP growth of 2.93 per cent in 2020 may be a mirage.

Tade Oludare, PhD, is an economist and a professionally qualified accountant, banker, and stockbroker. He has significant experience working or consulting for financial institutions and the academia in Europe, the United States of America, and Africa.