While acting simultaneously as an arsonist and a firefighter in the forex market, the CBN has only succeeded in eroding the value of the naira over the years.

0 Comments
A view of Central Bank of Nigeria's Abuja headquarters

Lamido Sanusi, the former Governor of the Central Bank of Nigeria (CBN), was notable among eminent public commentators who called for the devaluation of the naira in 2016. They were responding to the pressure on the value of the local currency, as a result of the spectacular oil-price collapse at the time, which is similar to the sharp decline in oil prices since March 09, 2020. The CBN was asked to end its managed floating exchange rate policy, which props up the value of the naira by “subsidizing” dollar purchases.

But when reminded that during his tenure the CBN pursued the same policy he wanted his immediate successor to end, Sanusi retorted grandiloquently: ‘we could afford it then.’ That, however, was an admission to pursuing a procyclical policy, one that is unsustainable. But while Sanusi didn’t start the policy that is known for fostering cycles of instability, the current CBN Governor, Godwin Emefiele, is continuing with it, anyway.

Therefore, the naira is yet again facing a probable cyclical devaluation. As the COVID-19 coronavirus cuts global demand for oil, and Saudi Arabia and Russia are pursuing different objectives in oversupplying the market, the spot price for the Brent crude fell to $32.38 per barrel (pb) on March 9, from the January 2020 peak of $70.20 pb. In this two-month period, CBN’s gross foreign reserves declined from $38.5 billion to $36.1 billion. And at the parallel market, the naira lost 17 per cent value as its exchange rate to the dollar rose from N360 to N420.

With the prospect of a deep global recession in Q2 2020, as the coronavirus grinds the wheels of economic and social activities of countries nearly to a halt, oil prices are likely to maintain a floor of around $30 pb for much of the rest of the first half of the year, compared to the initial $57 pb benchmark price in the Nigerian government’s 2020 budget now reviewed downward to $30 pb. In this scenario, the CBN would have to act against its current resolve, or posturing, and allow the naira to depreciate in value.

It would be déjà vu all over again. Despite the CBN’s stance against devaluation in 2016, and in spite of its suppression of demand for foreign exchange -- which it has re-enacted this term – the value of the naira plummeted from N162 to N360 against the US dollar in the parallel market almost four years ago.

But this is likely to be one-off. The naira will pare the value it would lose initially, and stabilise. Attendant to this would be improved market confidence. This will help to attract foreign investment, boost economic growth, and support accretion to the foreign reserves.

Instead, the CBN has kept faith with the alternative policy that subjects the naira to cycles of devaluation. Unlike the up-and-down gyration that the exchange rate may experience when it is market-driven, once the CBN devalues the naira during a period of oil price shock, the naira never recovers the lost value when oil prices recover, under its managed floating exchange rate policy. While acting simultaneously as an arsonist and a firefighter in the forex market, the CBN has only succeeded in eroding the value of the naira over the years.

The policy has also been inefficient in growing the foreign reserves. The value of CBN’s reserves assets is ostensibly correlated to oil prices. But trend movements of the reserves value show weak correlation. As the following chart shows, the reserves tend to rise with the price of crude oil. But with higher oil prices, the reserves start to grow slower and flatten as the CBN begins to fritter away the assets. 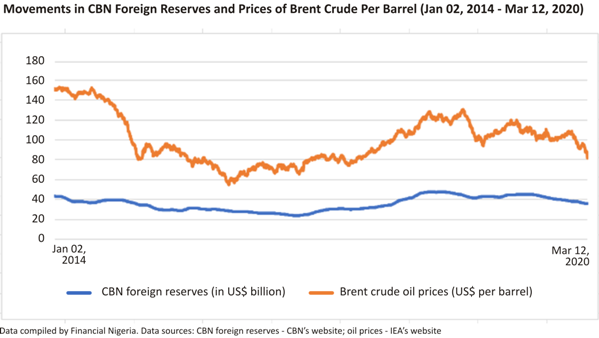 It is time for the CBN to change its forex policy, which serves vested interest, erodes investor confidence, and discourages capital flows into Nigeria. The policy has produced one consistent outcome: loss of value of the naira.

But we must not be naïve. It would be disastrous if the CBN were to adopt a flexible exchange rate regime without supportive fiscal policy measures. Such measures would include stimulating productivity growth, removal of subsidy on petrol – to eliminate another hugely distortionary policy – and investing in transparent social safety nets. Political support for the enforcement of market rules, with neither fear nor favour for anyone, is also essential for the success of a countercyclical forex policy.

The coronavirus-induced oil price crash has presented another awakening about the inept policy. Unlike the previous crises, the current iteration should not go to waste by deploying interventions that address surface issues while leaving the underlining malaise intact.