New data on world debt: A dive into country numbers

The new update of the IMF’s Global Debt Database shows that total global debt (public plus private) reached US$188 trillion at the end of 2018.

The new update of the IMF’s Global Debt Database shows that total global debt (public plus private) reached US$188 trillion at the end of 2018, up by US$3 trillion when compared to 2017. The global average debt-to-GDP ratio (weighted by each country’s GDP) edged up to 226 percent in 2018, 1½ percentage points above the previous year. Although this was the smallest annual increase in the global debt ratio since 2004, a closer look at the country-by-country data reveals rising vulnerabilities, suggesting that many countries may be ill-prepared for the next downturn. 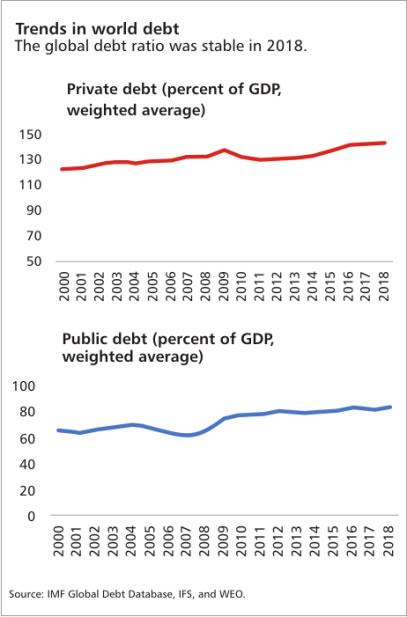 Looking at overall trends, there are two distinct groups:

Advanced economies. The debt ratio for both the public and private sectors declined in the majority of countries in 2018. It is worth noting that half of advanced economies ran fiscal surpluses in 2018 (that is, they had more revenues than spending). A third shrank the fiscal deficit or increased the fiscal surplus compared with the previous year. However, when we look at this group of countries as a whole, changes in the average total debt ratio were relatively small, declining 0.9 percent of GDP. 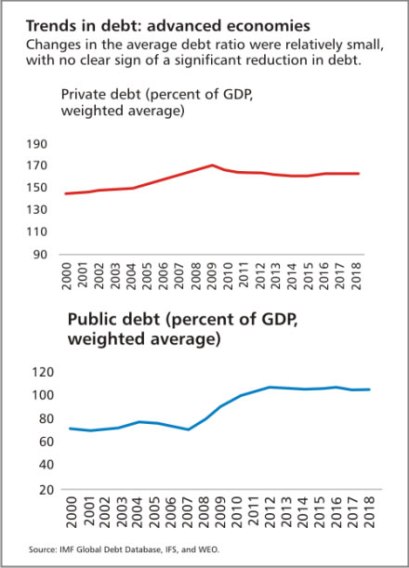 Emerging markets and low-income developing countries. The upward trend in the total debt ratio showed no sign of halting or slowing in either group, with the main increase coming from public debt. The average public debt ratio increased by more than 2½ percentage points in sub-Saharan Africa. 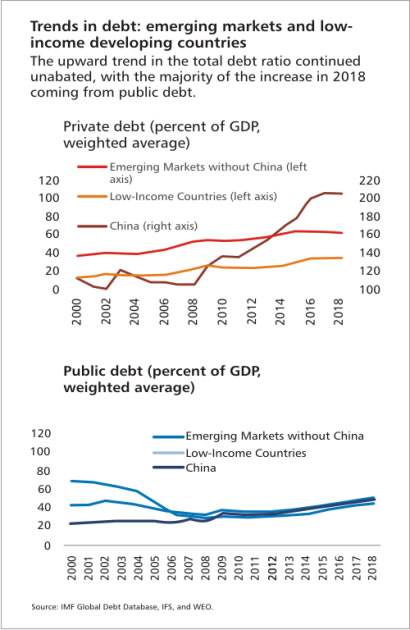 A detailed look at the numbers reveals the following dynamics.

•    Private debt developments – in particular corporate debt – differ considerably across countries. Unlike public debt, the increase in global private debt over the last decade has been unevenly distributed. In advanced economies the corporate debt ratio has gradually increased since 2010 and it is now at the same level as in 2008, the previous peak. But there are big differences. In some large economies, such as Spain and the United Kingdom, the corporate sector has shed massive amounts of debt since the global financial crisis. In the United States, corporate debt grew consistently since 2011 and reached a record high at the end of 2018. A common pattern among several major economies is the increasing use of debt for financial risk-taking (to fund distribution of dividends, share buybacks, and merger and acquisitions) and high speculative-grade debt. This could amplify shocks if companies defaulted or decided to reduce their debt by cutting investment or firing workers. At the same time, household debt ratios declined in advanced economies as a whole compared to 2008, with large decreases in the United States and the United Kingdom and increases in one third of advanced economies. In emerging markets other than China the average corporate debt ratio has declined since 2015 and is now 4½ percentage points above 2009, but these countries have not been immune to a worsening of the quality of their corporate credit. The household debt ratio has been increasing steadily, but it remains half the level in advanced economies.

Unlike before the global financial crisis, risks are not solely concentrated in the private sector but also in the public sector, partly reflecting the unresolved legacy of the global financial crisis. As discussed in the October 2016 Fiscal Monitor, excessive private debt levels increase the vulnerability to shocks and could lead to an abrupt and costly debt reduction process. But reducing debt in the private sector may also, in turn, be a burden for an already overindebted public sector if a decline in output leads to lower revenue or corporate defaults trigger losses and curb lending by banks. It is therefore important to reduce such vulnerabilities before the next adverse shock.

We are grateful to Juliana Gamboa Arbelaez, Virat Singh, and Yuan Xiang for outstanding research assistance.