The Federal Government’s (FG) 2020 budget was initially predicated on a few optimistic assumptions. These included single-digit inflation, crude oil price benchmark of $57 per barrel (pbl), crude oil production level of 2.18 million barrels per day (bpd), oil revenue projection of N2.64 trillion, stable exchange rate of N305/$1, and real gross domestic product (GDP) growth rate of 2.9 per cent. Since the beginning of the year, however, several events have occurred that have turned the budget projections southwards.

For example, in March, the Central Bank of Nigeria (CBN) devalued the naira to N360/$1; although the CBN explained via its Twitter handle that this was not a currency devaluation. Instead, the apex bank described the move as an “adjustment of price.” Also, in April, the FG revised the crude oil price benchmark to $30 pbl, and further dropped it to $25 pbl in May. Oil production output was revised downwards to 1.7 million bpd. However, because of the need to comply with the output cuts agreed by the Organisation of Petroleum Exporting Countries’ (OPEC), the country’s crude oil production would be approximately 1.41 million.

According to OPEC, the Nigerian oil and gas sector accounts for up to 10 per cent of GDP, and proceeds from petroleum exports represent at least 86 per cent of total export revenue. Therefore, the structural  vulnerability of the Nigerian economy has again been exposed as demand shock due to the coronavirus disease pandemic has seen oil prices plunge to record low levels.

The consequences of reduced proceeds from petroleum exports have included – but not limited to – increased domestic and foreign debts. This has also led to a rise in the amount spent by the government on debt service. The Medium-Term Expenditure Framework (MTEF) and Fiscal Strategy Paper (FSP) released by the Federal Ministry of Finance, Budget, and National Planning in June show that between January and March 2020, the FG generated revenue of N950.56 billion, while paying out N943.12 billion in debt service during the same period. This suggests the country spent nearly all its revenue on servicing its debt in the first quarter of the year.

Nigeria's external reserves also continued its decline throughout the first four months of 2020, dropping from $38.595 billion at the end of December 2019 to $33.52 billion as of the end of April 2020. By the end of May, the reserves, which had declined for 11 consecutive months, showed signs of respite with an increase to $36.59 billion, thanks to the disbursement by the International Monetary Fund’s (IMF) of the $3.4 billion emergency financial assistance to Nigeria. The loan was drawn under the Rapid Financing Instrument (FRI) to support the country’s efforts in addressing the severe economic impacts of the COVID-19 pandemic, including the sharp fall in oil prices. 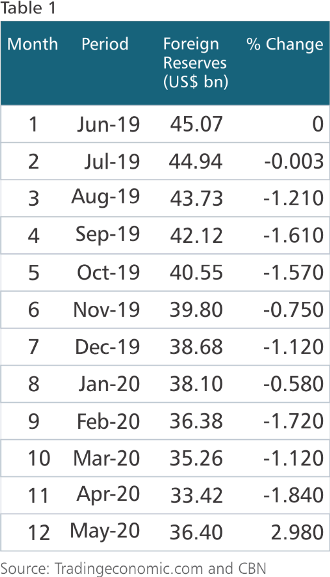 The negative economic consequences of the pre-COVID-19 land border shutdown, coupled with that of the lockdown arising from the pandemic have worsened the growth outlook of the economy. The IMF’s revised forecast in the wake of the pandemic show the Nigerian economy will contract by 3.4 per cent in 2020. The FG’s latest projection has aligned with the IMF’s forecast.

Consumer Price Index (CPI) data from the National Bureau of Statistics (NBS) also reveal that Nigeria’s inflation rate has been on a consistent upward trajectory. Data from the NBS shows the CPI has risen by 138 pbs since August 2019 to 12.40 per cent in May 2020. The rising costs of producing and transporting food items around the country have continued to push up food inflation. 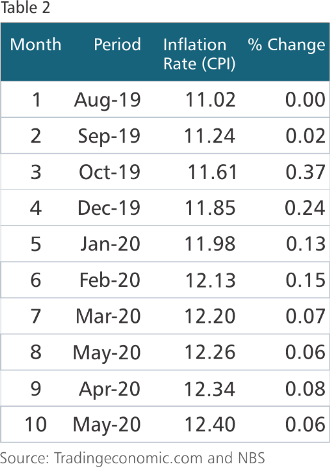 Given the plethora of economic issues, it is logical to consider alternatives aimed at reducing expenditure and increasing revenue. It would also be logical to commence this process of fiscal discipline in the oil and gas sector as this sector currently represents the main source of foreign exchange and government revenue.

In the 2019 budget, about N305 billion was budgeted for petrol subsidy. This budget provision increased in 2020 by N145 billion. However, there were indications last month that the FG was proceeding with the full deregulation of the downstream petroleum sector. The Petroleum Products Pricing Regulatory Agency (PPPRA) announced the removal of an existing cap on fuel prices. The agency essentially stated that, henceforth, prices would be determined by market forces.

Removal of subsidies on Premium Motor Spirit (PMS) will help in achieving the following long-term policy targets. One, there would be more resources to be channeled into infrastructural and social investments such as roads, electricity, quality health care and education. Two, more support would be provided to the manufacturing and agricultural sectors to boost productivity, thereby reducing inflationary pressures as more products are produced and manufactured locally. This will also reduce unemployment and underemployment problems.

Three, there are currently five refineries in Nigeria. According to data released by the Nigerian National Petroleum Corporation (NNPC) in 2019, the refineries operated at 5.55 per cent of their combined installed capacity of 445,000 bpd. Meanwhile, a PPPRA report shows the country imported 19.18 billion litres of petroleum products in 2019, while all five refineries produced only 166.33 million litres of PMS last year.

Therefore, the process of deregulating the downstream sector of the petroleum industry should also include privatizing the five existing refineries and incentivizing the private sector to establish private refineries. This would not only save the economy billions of dollars in foreign exchange; but it would also stimulate the efficient management of the refineries and generate significant revenues for the government

Four, the foreign exchange market will be further stabilized if the NNPC and CBN were to work together to enable oil marketers to access foreign exchange at market-determined rates as opposed to speculative exchange rates.

Finally, with the availability of more resources to the government through waste reduction and improved performance of refineries, budget deficits and the amounts spent on debt service will also reduce.