The economic benefits of bringing more women into the labour force are greater than previously thought.

As girls, we were raised with the belief that we could accomplish anything, and that no barrier was insurmountable. Yet, for so many women, the reality doesn't quite meet their aspirations. Things weren't exactly equal in the relatively conservative middle-class society in India where we both grew up. But we thought of gender inequality as largely an issue of social justice. It was only after we started delving into the topic that we came to realize that it is an equally significant economic issue.

Women make up almost half of the world's working-age population of nearly 5 billion people. But only about 50 percent of those women participate in the labour force, compared with 80 percent of men. Not only is female labour force participation lower, but women who are paid for their work are disproportionately employed in the informal sector–especially in developing economies–where employers are subject to fewer regulations, leaving workers more vulnerable to lower wages and job losses. Furthermore, even in the formal sector, women doing the same work and having the same level of education earn less than their male counterparts. And, because women generally spend less time in the paid labour market, they have lower pensions and face a higher risk of poverty in old age. Among those who do work, few rise to senior positions or start their own businesses. Women also shoulder a higher share of unpaid work within the family, including childcare and domestic tasks, which can limit their opportunity to engage in paid work and constrain their options when they do.

The IMF's research highlights how the uneven playing field between women and men imposes large costs on the global economy. Early IMF studies on the economic impact of gender gaps assumed that men and women were likely to be born with the same potential, but that disparities in access to education, health care, and finance and technology; legal rights; and social and cultural factors prevented women from realizing that potential. In turn, these barriers facing women shrank the pool of talent available to employers (Kochhar, Jain-Chandra, and Newiak 2017). The result was lower productivity and lower economic growth. The losses to an economy from economic disempowerment of women were estimated to range from 10 percent of GDP in advanced economies to more than 30 percent in South Asia and in the Middle East and North Africa.

More recent research suggests that the economic benefits of bringing more women into the labour force exceed previous estimates. This is because women and men may have the same potential, but they bring different skills and ideas–that are economically valuable–to the table (Ostry and others 2018). Gender differences may reflect social norms and their impact on upbringing, social interactions, risk preferences, and response to incentives. For instance, studies have found women to be more risk averse, reflecting greater fear of failure, and less competitive. Women's greater caution has benefits: gender-balanced corporate boards improve firm performance, especially in high-tech manufacturing and knowledge-intensive services. Gender diversity on boards of banking supervision agencies is also associated with greater financial stability (Sahay and Čihák 2018). Similarly, banks with higher shares of women board members have thicker capital buffers, a lower proportion of nonperforming loans, and greater resistance to stress, possibly because having more women in executive positions contributes to diversity and complementarity of thought, leading to better decision-making.

Drawing on macroeconomic, sectoral, and firm-level data, a recent IMF study (Ostry and others 2018) suggests that men and women complement each other in the workplace in terms of different skills and perspectives, including different attitudes toward risk and collaboration. As a result, increasing women's employment boosts growth and incomes more than previously estimated, exceeding the improvement that comes simply from adding workers. Among countries where gaps in participation rates are the largest, closing them adds 35 percent to GDP, on average. Four-fifths of the gains come from adding workers to the labour force, but fully one-fifth arises from the boost to productivity brought by greater gender diversity. The study also shows that increasing women's labour force participation produces large gains in economic welfare, which account for changes in consumption goods, home production, and leisure time; these gains exceed 20 percent in South Asia and the Middle East and North Africa (see Chart 1). 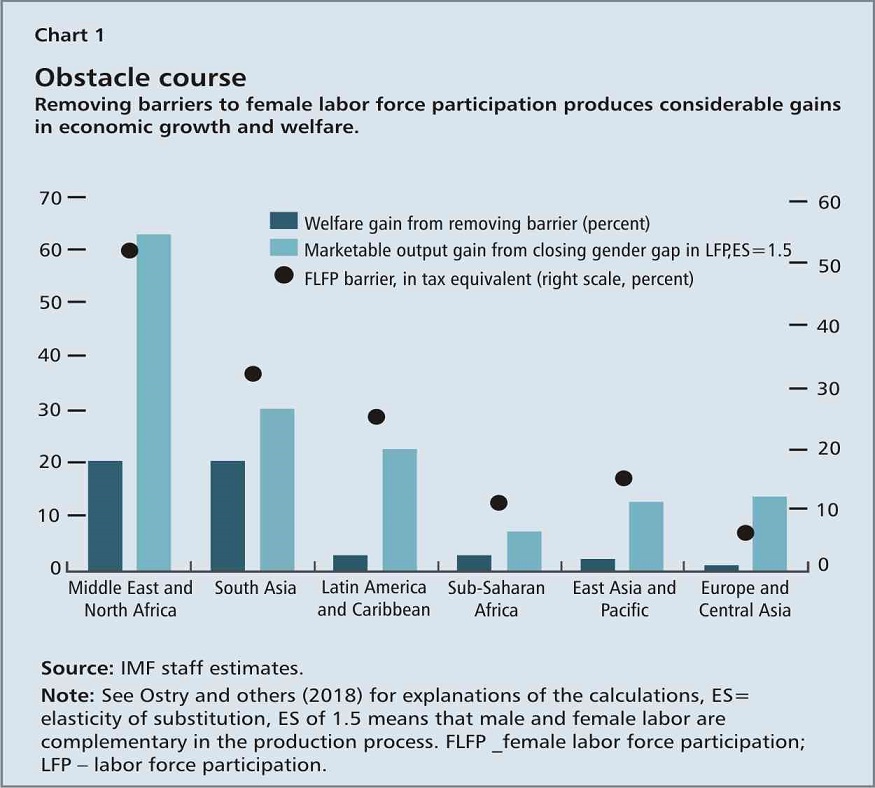 Another important finding: when more women participate in the labour force, men also benefit. Why? Because women's complementary skills raise productivity, boosting wages for everyone. This increase in productivity more than makes up for the decline in wages that might be expected when more workers are competing for jobs.

But simply bringing more women into the workforce may not be enough. A recent IMF study sounds a cautionary note on the challenges women face in a rapidly changing labour market (Brussevich and others 2018). Digitalization, artificial intelligence, and machine learning are hollowing out jobs that involve routine and repetitive tasks while increasing the value of jobs involving management and cognitive skills. Hard-won gains from policies to increase the number of women in the paid workforce and close wage gaps may be quickly eroded if women are overrepresented in jobs at high risk of automation. Indeed, the study finds that women perform more routine tasks than men across all sectors and occupations, although there is significant variation across countries.

The risk of displacement is particularly high for less-educated women, those aged 40 and above, and those in low-skill clerical and sales jobs. Meanwhile, women across sectors and occupations are underrepresented in professional and managerial positions that are at lower risk of displacement by technology. Globally, women hold fewer than 20 percent of board seats in banks and bank supervision agencies (Sahay and Čihák 2018) and account for fewer than 2 percent of bank CEOs. In the fast-growing tech sector, women are 15 percent less likely than men to be managers and professionals and 19 percent more likely to be clerks and service workers (see Chart 2). 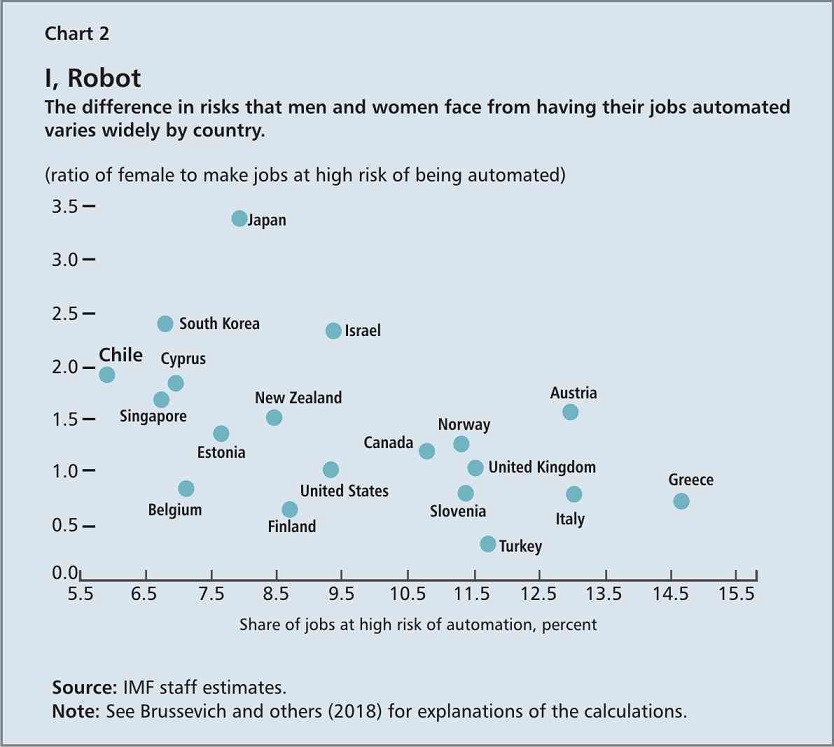 Given the current state of technology, the study estimates that 26 million women's jobs in 30 countries (28 countries in the Organisation for Economic Co-operation and Development plus Cyprus and Singapore) have a greater than 70 percent chance of being displaced by technology within two decades. On a global scale, this suggests that 180 million women's jobs are at risk. While more men than women are at risk of being displaced by automation, the number of female jobs lost represents a larger proportion of the female labour force.

What can be done? Because gender inequality is so multifaceted, there is no single remedy, and the best policy approach will vary across countries, depending on the level of economic development, existing gender gaps, and the speed at which the new technology affects the economy. Three broad areas can be highlighted:

First, policies to bring more women into the workforce: A range of institutional, legal, regulatory, and fiscal policy levers have been shown to boost female labour force participation. While there is no one-size-fits-all solution, policies should seek to foster opportunity and remove barriers. Policies and infrastructure that make it easier for women to reconcile work and family life are particularly effective.

Emerging market and developing economies should

•    Support female entrepreneurs by increasing their access to finance. Women often face more restrictive collateral requirements, shorter maturity of loans, and higher interest rates than men (see “Banking on the Future of Women” in this issue of F&D). Initiatives such as Malaysia's Women Entrepreneur Financing Programme and Chile's simplified deposit accounts have helped close the gender gap in borrowing rates.

•    Push for greater parity between maternity and paternity leave. In Sweden, this has helped mothers return to work more rapidly and has shifted underlying gender norms about parenting.

•    Promote access to affordable, high-quality childcare. An example is Japan, which expanded childcare leave benefits from 50 percent to 67 percent of salary. Research shows that cutting the cost of childcare by half could increase the number of young mothers in the labour market by 10 percent. There is also considerable evidence that women are more responsive to specific tax policies than men. These include policies that do not penalize the secondary earner, who is still most likely to be female, by replacing family taxation with individual taxation, as Canada, Italy, and Sweden have done. Tax relief measures for low-income families have also been found to increase employment rates for women. The reason: tax relief reduces the tax burden and increases after-tax earnings for women, thus increasing the incentive for women to join, or remain in, the labour force. Examples include the earned income tax credit in the United States and a combination of tax credits and transfers in Belgium, Germany, and the United Kingdom.

Second, policies to provide women with the right skills and to empower women in the workplace: Gender parity in investments in education and health are necessary to ensure that women can obtain quality jobs. In India, for instance, IMF research suggests that female labour force participation would rise by 2 percentage points if Indian states increased education spending by 1 percent of GDP. Building skills early would also provide the most important safeguard against displacement by technology and allow women to benefit from new work opportunities.

For those already in the workforce, fiscal instruments such as tax deductions for training in the Netherlands and portable individual learning accounts in France can remove barriers to lifelong learning. Countries could also consider subsidizing training by private companies via dedicated payroll taxes and public grants. Concerted efforts are needed to provide women with more opportunities to rise into managerial and leadership roles by setting relevant recruitment and retention targets for organizations, setting promotion quotas as was done in Norway, and creating mentorship and training programs.

Large gender gaps persist in access to the digital technology that creates new job opportunities: 60 percent of the global population, mostly women in emerging market and developing economies, still have no access to the internet; 250 million fewer women are online than men. Public and private investment will be essential to support technological adoption and close digital gender gaps. Finland's approach to ensuring universal access to broadband connectivity, digital education for all, and digital access to business and government services is a good example of a comprehensive approach to closing the gender digital divide.

Third, easing transitions for displaced workers: Given that female workers face a particularly high risk of being displaced through automation, it will be essential to ensure equal support for displaced men and women through labour market policies to improve skills, connect workers with jobs, and promote job creation. Social protection systems will also need to adapt to more flexible forms of work, such as telework. To address deteriorating income security associated with rapid technological change, some advanced economies may consider expanding noncontributory pensions and adopting basic income guarantees.

Recent decades have seen considerable progress in levelling the playing field for economic opportunities, but much more work remains to be done. The good news is that countries across the globe have embraced the imperative for gender equality. Policymakers, governments, and corporations now recognize the benefits for economic growth and development of giving women equal opportunities, and they are seeking to improve their policies and practices in this area. The IMF is committed to working with other international organizations, governments, civil society organizations, and the private sector to reduce barriers to gender equality by providing policy advice and analysis.